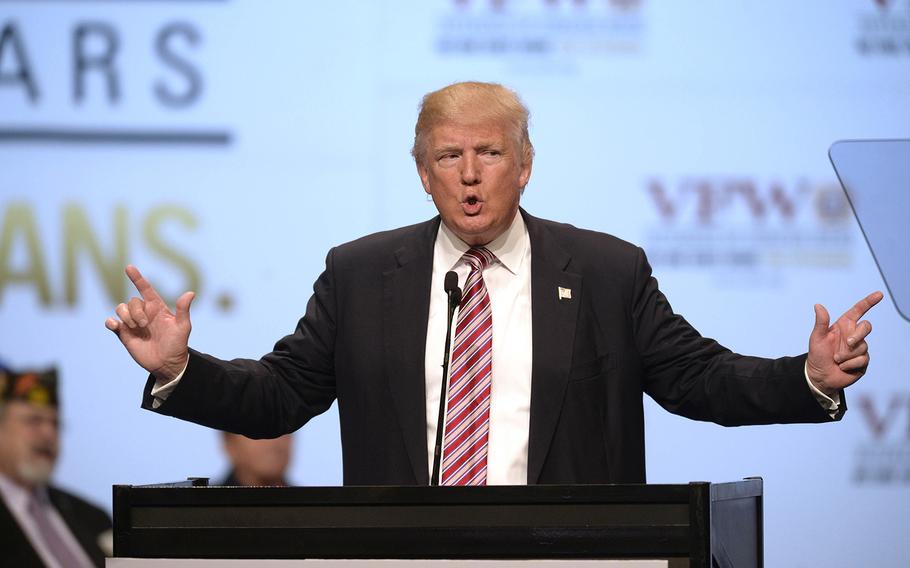 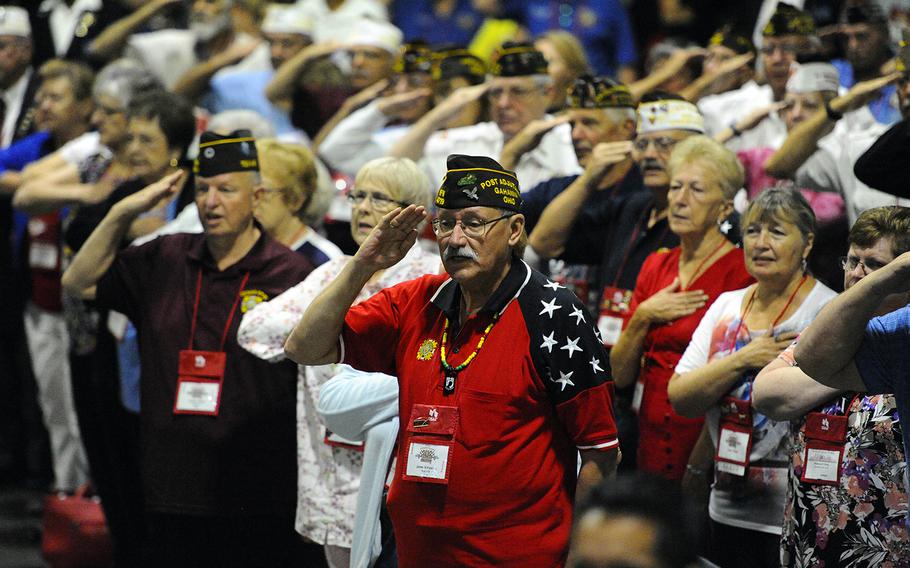 WASHINGTON — Donald Trump on Tuesday pitched his health care reform plan to the Veterans of Foreign Wars convention in North Carolina, but won his biggest applause lines by hammering opponent Hillary Clinton over mishandling email and the dangers of immigration.

Conventioneers broke out into chants of “lock her up” when Trump mentioned Clinton’s use of a private email server, echoing a refrain at the Republican National Convention. The billionaire businessman and former reality television star received a standing ovation for warning that accepting immigrants and refugees will bring the war on terrorism inside the United States.

Trump, who accepted the GOP presidential nomination last week, spoke to the annual VFW convention a day after Clinton, who told veterans she would fight to keep post-9/11 GI Bill education benefits intact despite a proposal in Congress to trim them back.

“We know how she takes care of the veterans, just look at her invasion of Libya and her handling of Benghazi -- a disaster,” Trump told the crowd at a Charlotte convention center. “Or look at her emails, which put America’s entire national security at risk.”

As the crowd began to chant, Trump appeared to ad lib his prepared speech to one of the country’s largest veteran service organizations.

“And to think she was here yesterday. I guess she didn’t do very well,” he said.

Trump told the crowd that Clinton and the Democrats were responsible for the rise of the Islamic State group, which has been fighting U.S. and coalition forces in Iraq and Syria for two years and recently claimed responsibility for terrorist attacks in Europe.

“The people in this room know better than anybody else what I mean by weakness, but because of weakness, ISIS has been established,” he said. “It’s also essential that we suspend the refugee flows from Syria and other dangerous countries so we don’t bring into the United States the same terrorism that our American soldiers are fighting overseas.”

Many veterans in the convention center stood and applauded Trump’s plan to dramatically curb immigration from countries around the world that have struggled with domestic terrorism.

The GOP nominee recently tweaked his immigration plan – calling the changes an “expansion” – to focus on geographic locations and countries after early calls for a ban on Muslims entering the country drew widespread criticism.

Trump also painted a picture of the Department of Veterans Affairs as failing and causing the death of “many” veterans.

He pitched his 10-point plan to overhaul the country’s second largest bureaucracy, which includes allowing all veterans to seek private health care, appointing a new VA secretary, and installing a 24-hour VA hotline in the White House.

“People are waiting in line 5 days, 6 days, 7 days and many are dying,” he said. “With a simple procedure they would live and they are dying because they can’t even get to see their doctor.”

Trump claimed the dramatic expansion of private health care for veterans will not cost any additional money. However, an emergency law passed in 2014 to ease a wait-time scandal at VA by allowing some veterans to visit private providers cost billions of dollars.

“We will pick up the bill. It will cost us less money and the care will be amazing. You have my word on that,” Trump said.

Vice presidential candidate Mike Pence also appeared with Trump and made a brief speech, focusing on the VA plan as well as his father’s Korean War experience and his son’s service as a Marine. Pence did not serve in the military.

“I know this man’s heart, I hear the way he speaks when the cameras are off about those who serve and those who have served and we will ensure that our soldiers have the resources they need to complete their mission and come home safe,” Pence said.

In a speech to the VFW on Monday, Clinton focused on preserving education benefits in the post-9/11 GI Bill that are popular among younger veterans – an issue not mentioned by Trump or Pence.

The benefits have come under fire recently in the Senate, as lawmakers are attempting to pass a wide-ranging VA reform bill that trims $3.4 billion of the GI Bill benefits in order to cut the overall cost of the legislation.

The Senate effort has drawn bipartisan congressional support and is backed by veterans groups, but cuts to the education benefits are strongly opposed by Iraq and Afghanistan Veterans of America, whose 425,000 members are most likely to use the GI Bill.

“Defending our education benefits is a non-partisan issue. Millions of veterans nationwide are watching very closely today,” Paul Rieckhoff, founder and CEO of IAVA, said in a released statement just before Trump’s speech.