Trump puts sanctions on the table, but will Putin want more? 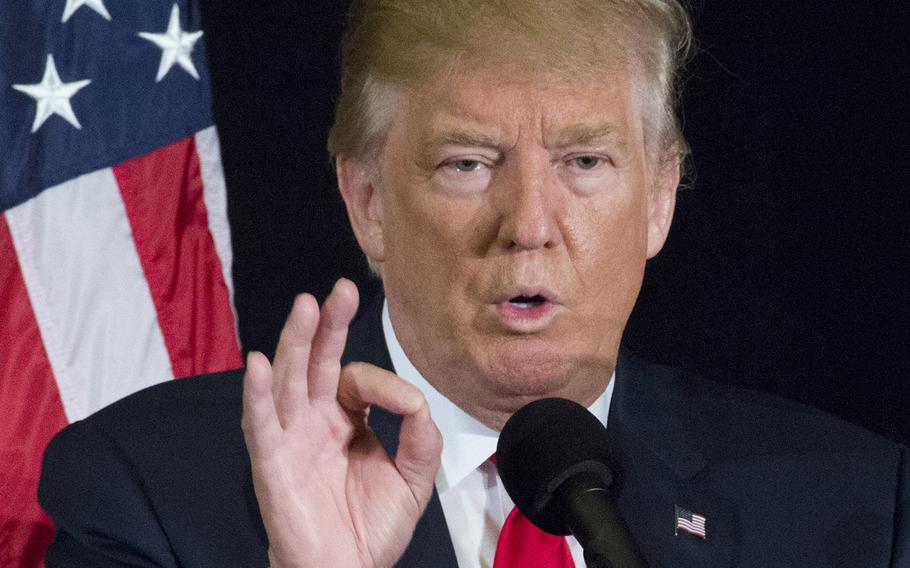 Buy Photo
Donald Trump, at a campaign rally in Virginia in October, 2016. (Stars and Stripes)

“What the new American president is saying is that he has an enormous respect for the Russian people and the legacy of the relationship that the U.S. has with Russia, which dates back to the Second World War,” Anthony Scaramucci, told Russia’s TASS news agency in an interview.

The comments this week, by both Trump and his adviser, who is attending an economic forum in Davos, Switzerland, are the latest sign that the incoming administration is intent on adjusting how the U.S. relates to both longtime allies and to Russia.

Trump, in interviews published this week by a German and British newspaper, labeled NATO “obsolete,” the European Union dysfunctional, heralded Britain’s exit from the bloc and threatened tariffs on German automaker BMW. He also criticized German Chancellor Angela Merkel and suggested the dissolution of the European Union wouldn’t be a bad thing.

The comments, some of which echoed past campaign statements, prompted outcry in Europe’s capitals and praise from Moscow.

“It seems to be that priority No. 1 for Trump is gaining Russia’s confidence,” said Jonathan Eyal, a security expert with the Royal United Services Institute in London. “He has the curious position of rattling the allies and exciting the enemies. This is something we have never seen before.”

Trump’s unprecedented flirtation with breaking from U.S. foreign policy orthodoxy, which has emphasized solidarity inside NATO, now casts more confusion over how the U.S. military’s expanded presence in Europe will factor into the president-elect’s rapprochement with Russia and allies’ ability to maintain Russian sanctions.

Trump, in an interview with the Times of London, said he hoped the potential lifting of Russian sanctions could be tied to a new deal with Russia to reduce nuclear arms.

Moscow has yet to offer its terms, but any such plan could come with a counterdemand that the U.S. remove missile defense systems in Europe, which Russia has complained about during two U.S. administrations.

In the past two years, the U.S. has increased its presence in the Baltics and Poland, most recently with the arrival of the 3rd Armored Brigade Combat Team, 4th Infantry Division, which brought with it about 80 tanks and hundreds of other fighting vehicles and artillery.

The deployment, coming just days before Trump’s inauguration, has prompted some analysts to conclude that the move, while planned, should have been halted to avoid constraining the Trump administration in its attempts at rapprochement with Moscow.

“The timing of these deployments has clearly been determined by the outgoing administration’s desire to make it more difficult for President Trump to reverse plans agreed at NATO’s Warsaw summit last summer to bolster the alliance’s presence in central and eastern Europe,” said Nick Witney, a former head of the European Defense Agency and now a senior fellow at the European Council of Foreign Relations.

In addition, the U.S. Army in Europe has a training mission focused on building up local forces in Ukraine, an effort launched in the wake of Russia’s 2014 intervention in that country.

It is unclear whether the U.S. can pursue those military aims while also achieving warmer ties with Russia, which has been angered by the enhanced military presence along NATO’s eastern flank.

“This is going to be the story of the next few months — the difference between Trump’s expectations for cooperation with Russia and what Russia will demand in return. And I don’t think the two will meet,” Eyal said. “Putin’s agenda is to get real security concessions in Europe, not the sanctions.”

Any attempt to scale back U.S. European Command’s deterrence in the Baltics and Poland would distress many inside NATO, particularly allies in the east — small nations that rely heavily on U.S. security and diplomatic backing.

Still, Trump has indicated that perhaps the more pressing priority is working with Moscow to counter Islamic State group fighters and other militants in places like Syria.

In Davos, Scaramucci said Trump was looking for common ground with Russia and that sanctions could stand in the way of progress.

“I think the sanctions had in some ways an opposite effect because of Russian culture. I think the Russians would eat snow if they had to,” Scaramucci told TASS. “And so for me the sanctions probably galvanized the nation with the nation’s president.”

With Trump pivoting toward Russia, traditional allies like Germany now find themselves on unfamiliar ground.

“Six decades after the postwar order was created, Europe has a massive incentive to overcome its dependence on U.S. leadership,” wrote Stefan Lehne and Heather Grabbe in a paper published Thursday by the Brussels-based Carnegie Europe think tank. “Either the EU fills the vacuum left by a disengaging United States, or the vacuum will fill the EU.”

Leaders in Europe have reacted with anger and confusion at Trump’s criticism.

“We Europeans have our fate in our own hands,” Merkel said in response to Trump’s comments. “He has presented his positions once more. They have been known for a while. My positions are also known.”