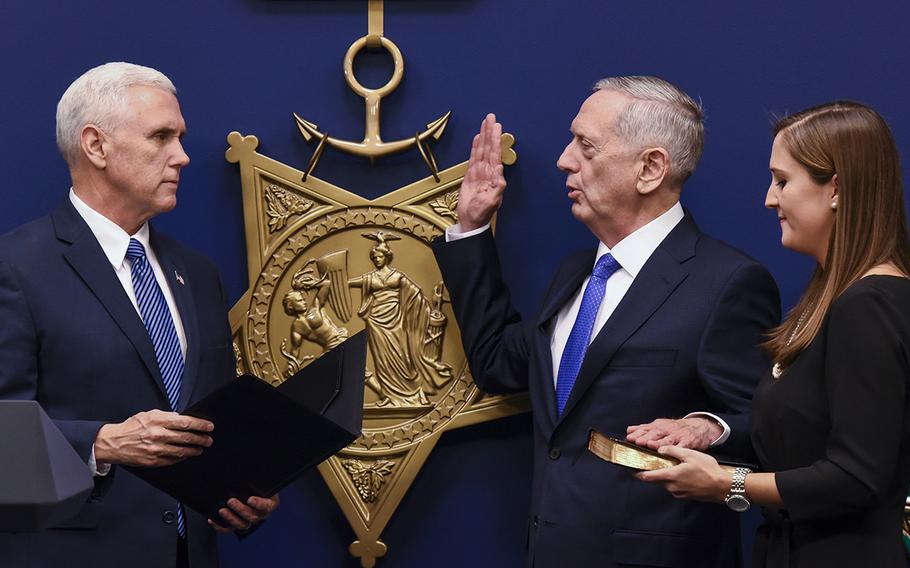 Buy Photo
Defense Secretary Jim Mattis is sworn in by Vice President Mike Pence in a ceremony Friday in the Pentagon's Hall of Heroes. Mattis, a retired Marine general, was confirmed Jan. 20 by the Senate to serve as the nation's 26th Pentagon chief. (Corey Dickstein/Stars and Stripes)

Buy Photo
Defense Secretary Jim Mattis is sworn in by Vice President Mike Pence in a ceremony Friday in the Pentagon's Hall of Heroes. Mattis, a retired Marine general, was confirmed Jan. 20 by the Senate to serve as the nation's 26th Pentagon chief. (Corey Dickstein/Stars and Stripes) 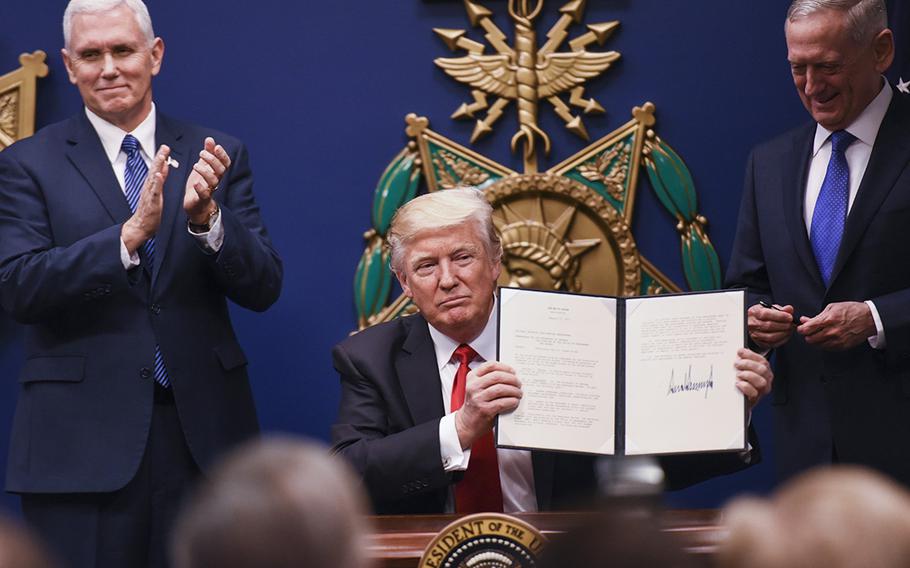 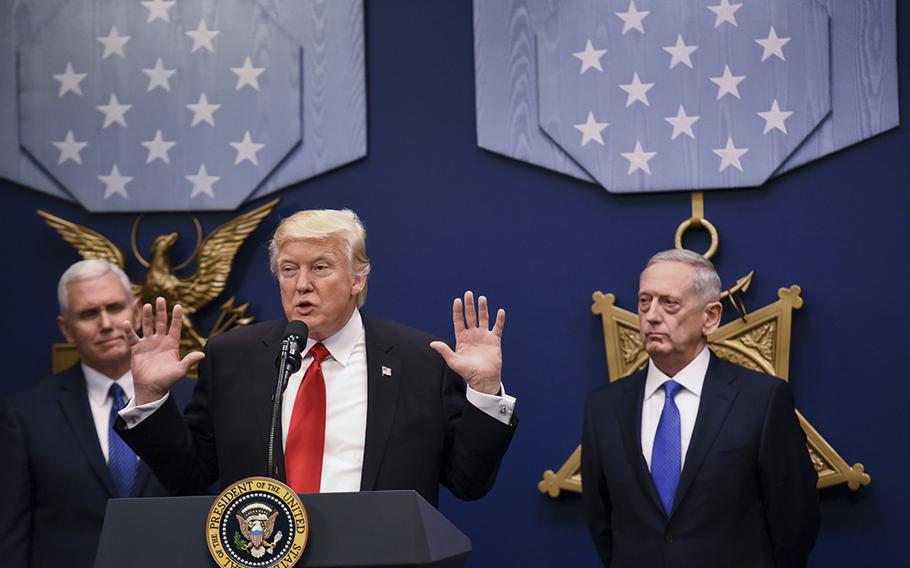 President Donald Trump signs an executive order Friday to rebuild the U.S. military during a visit Friday to the Pentagon. (Corey Dickstein/Stars and Stripe)

WASHINGTON – President Donald Trump visited the Pentagon on Friday for a briefing from the Joint Chiefs of Staff, and signed two executive orders affecting national security.

The two orders aim to improve national security by increasing defense spending and tightening screening standards for immigration, according to news reports.

Trump said both orders aim “to ensure that the sacrifices of our military are supported by the actions of our government.”

The first executive order would “begin a great rebuilding of the armed services of the United States,” Trump said. “We are developing a plan for new planes, new ships, new resources and new tools for our men and women in uniform.

“As we prepare our budget request for Congress … our military strength will be questioned by no one,” he said.

Trump’s second executive order established “new measures to keep radical Islamic terrorists out of the United States of America.” It calls for a 120-day suspension of the U.S. Refugee Admissions Program and a 90-day ban on all entry to the United States from countries with terrorism concerns — which includes Iraq, Syria, Iran, Sudan, Libya, Somalia and Yemen.

“We don’t want’em here,” Trump said. “We want to ensure we are not admitting into our country the very threats our soldiers are fighting overseas.”

The terms of the order means Syrian refugees will no longer be allowed into the United States until Trump determines the protocols used by the refugee assistance program will not threaten national security. Although an original draft of the order included a plan for the Pentagon and the State Department to create safe zones within Syria, that directive was omitted from the order Trump eventually signed.

Trump arrived Friday afternoon at the Pentagon, where he was greeted by an honor cordon and his new Secretary of Defense Jim Mattis. Trump then met with the Joint Chiefs of Staff in the Pentagon’s secure conference room known as “the tank,” where they were expected to discuss potential adjustments to accelerate operations against the Islamic State group in Iraq and Syria.

Trump has instructed Mattis and his top generals to provide him a plan within the next month to boost the campaign. As a candidate and during his first week as president, Trump has been critical of the operation that was shaped by his predecessor Barack Obama. Trump has not provided details of any changes he might make.

The Pentagon stressed Thursday that Mattis had not ordered any changes to U.S. military operations around the world, including those in Iraq and Syria or Afghanistan.

The defense secretary is focused on listening to the advice of his commanders and allied leaders, said Navy Capt. Jeff Davis, a Pentagon spokesman.

“I heard him say this morning, ‘The good Lord gave me two ears and one mouth for a reason’,” Davis told reporters Thursday.

Mattis will make his first overseas trip next week when he will visit with top leaders of key allies South Korea and Japan.