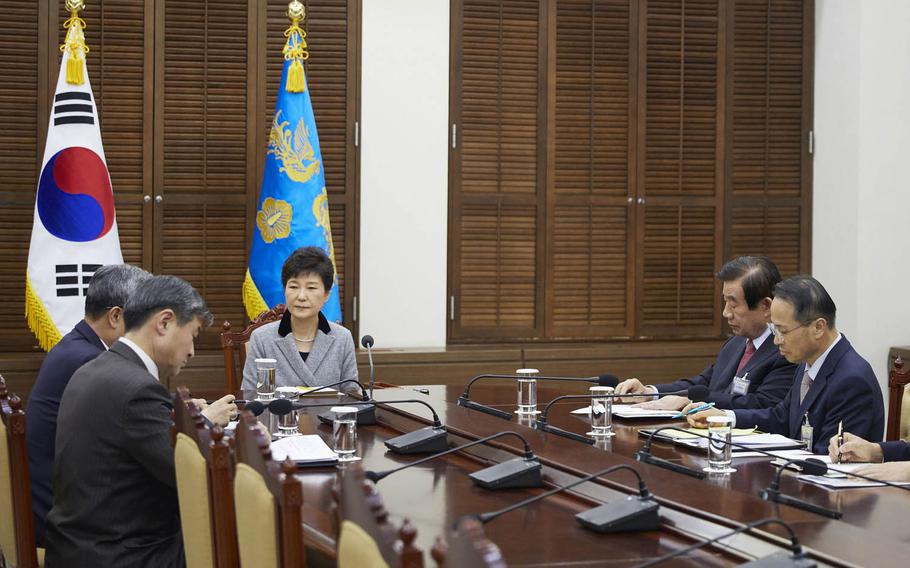 South Korean President Park Geun-hye receives a briefing from her National Security Council on Wednesday, Nov. 9, 2016, in Seoul to discuss the ramifications of the U.S. presidential election. U.S. President-elect Donald Trump reportedly promised to maintain Washington's security commitment to South Korea in a phone call the next day with Park. (Courtesy of the South Korean presidential office)

SEOUL, South Korea — On the campaign trail, Donald Trump signaled the possibility of a fundamental shift in the U.S.-South Korean alliance and policies toward an increasingly dangerous North Korea.

South Korean officials are hoping the president-elect’s deeds won’t match his words, but analysts say the country should brace for a change in strategy.

Park emphasized that North Korea is the greatest threat facing the two allies and stressed the need for strong sanctions and pressure against Pyongyang. In response, Trump said he agreed with her “100 percent,” according to a transcript provided by the Blue House, as the president’s office is known.

He vowed that the U.S. “will be steadfast and strong with respect to working with South Korea to protect against the instability in North Korea.”

“We are with you all the way, and we will not waver,” he was quoted as saying. “We will all be safe together.”

North Korea, meanwhile, issued a warning Thursday that it has no intention of giving up its nuclear weapons program.

“Washington’s hope for North Korea’s denuclearization is an outdated illusion,” the official ruling party newspaper Rodong Sinmun said in a commentary. It didn’t mention Trump by name but was published after his election.

It also criticized President Barack Obama’s policy of strategic patience, saying it has only increased the burden on his successor.

South Korea’s Ministry of National Defense expressed confidence the alliance between the two countries would stay strong. But military and government officials were holding emergency meetings to discuss the possible ramifications of his victory over Hillary Clinton.

Trump’s earlier statements have raised fears that his presidency could shake the alliance and even boost calls for South Korea to develop its own nuclear weapons – something suggested by the candidate earlier this year as a way to offset the U.S. burden.

“He’s talked about alliances as protection rackets and said South Korea should build nuclear weapons. Even if he didn’t mean any of it, I suspect there are people in Seoul who see the next four years as a unique window to pursue a nuclear weapons capability,” said Jeffrey Lewis, a nuclear-weapons expert at the Middlebury Institute of International Studies at Monterey, Calif.

One of the first major tests of Trump’s Korea policy is likely to be a missile launch or another provocation from North Korea, which has conducted two underground atomic explosions and test-fired an unprecedented number of missiles this year alone.

Experts say the North is showing clear technical progress and could have nuclear-tipped intercontinental ballistic missile capabilities by 2020, near the end of Trump’s term.

Trump has said he would press China to rein in its protégé, and he told Reuters in May he “would have no problem” speaking to North Korea’s leader Kim Jong Un. That has led many to believe he would pursue unconditional talks with Pyongyang, which would be a sharp reversal of President Barack Obama administration’s policy.

The U.S. and its allies are trying to push through tougher U.N. Security Council sanctions against the North, but they face opposition from China due to disputes over the South China Sea and Washington’s plans to deploy a high-altitude missile defense system known as THAAD in South Korea.

Analysts say Trump is also likely to drive a hard bargain in future negotiations over a free-trade agreement — which he has called a “job killing” deal — and the defense cost-sharing agreement that covers about 28,500 U.S. servicemembers stationed in South Korea.

Trump has said South Korea should be paying more for its defense and said he might withdraw American troops if it doesn’t. U.S. and South Korean officials were quick to point out that Seoul already pays about half the personnel costs, about $900 million a year.

South Korea also is paying most of the costs for the $10.7 billion relocation of the bulk of U.S. forces in Korea to an expanded base south of Seoul.

The troops are part of the U.S. nuclear umbrella, or extended deterrence, that has prevailed since the 1950-53 Korean War ended with an armistice instead of a peace treaty, leaving the peninsula divided by the world’s most heavily fortified border.

Victor Cha, who holds the Korea chair at the Washington, D.C.-based Center for Strategic and International Studies, said Trump might try to expedite the postponed transfer of wartime operational control - known as OPCON - from Washington to Seoul.

“Trump’s guiding principle has been to put American interests first,” Cha said in a commentary issued Wednesday. “In this regard, it is entirely plausible that a Trump presidency may seek to complete OPCON transfer and put these responsibilities in the hands of Koreans.”

Further complicating the situation, South Korea’s president is facing an influence-peddling scandal that is threatening to bring down her government. Leif-Eric Easley, an international security expert in Seoul, said that leaves both countries dangerously distracted by domestic issues.

“I would not be surprised if there are those in Pyongyang who are looking to take advantage of the situation,” he said.