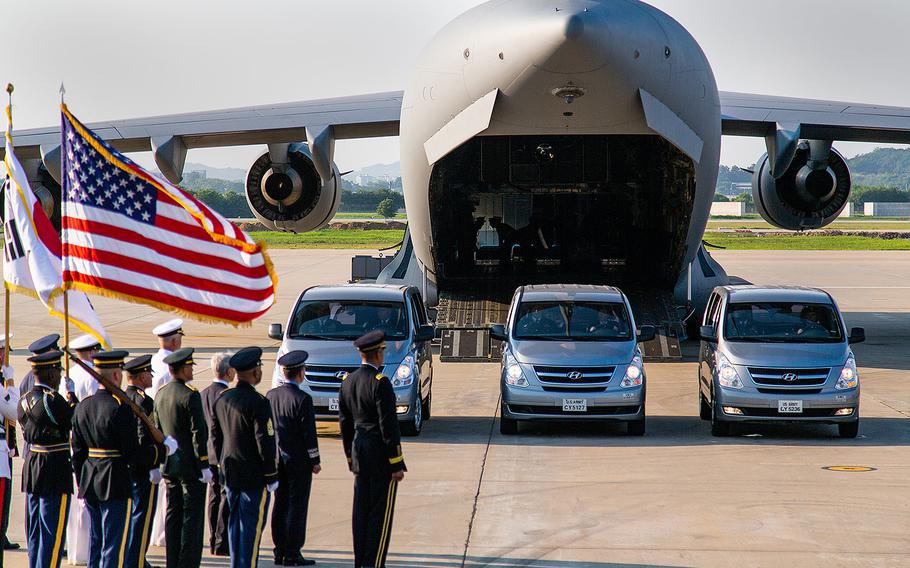 Buy Photo
A casket is placed into an Air Force transport plane at Osan Air Base, South Korea, for the trip to Hawaii on Wednesday, Aug. 1, 2018. (Marcus Fichtl/Stars and Stripes)

SEOUL, South Korea — President Donald Trump thanked North Korea’s leader for returning the remains of war dead and hinted at another summit amid concern that the momentum for a nuclear deal has stalled.

The 55 caskets were flown Wednesday from South Korea to Hawaii, where a team of military anthropologists and other scientists will begin a painstaking identification process that could take years.

The administration welcomed the repatriation as an important goodwill gesture as Secretary of State Mike Pompeo heads to Singapore for a regional security meeting that is likely to have North Korea high on the agenda.

U.S. officials said Pompeo and North Korean Foreign Minister Ri Yong Ho may meet on the sidelines of the forum on Saturday since they’ll both be there, although nothing was confirmed.

Kim Jong Un agreed to return remains of U.S. servicemembers killed in the 1950-53 Korean War, the only concrete commitment made during his June 12 summit with Trump.

“Thank you to Chairman Kim Jong Un for keeping your word & starting the process of sending home the remains of our great and beloved missing fallen!” Trump wrote in a tweet late Wednesday after repatriation ceremonies held in South Korea and Hawaii.

“I am not all surprised that you took this kind action,” Trump added. He also referred to a nice letter sent by Kim and said, “I look forward to seeing you soon!”

He didn’t provide more details. The U.S.-North Korean summit in Singapore was the first to be held between the longtime adversaries who remain technically at war after the 1950-53 conflict ended with an armistice instead of a peace treaty.

Previous U.S. presidents have refused to meet with their North Korean counterparts without progress on the nuclear front.

The return of the remains was the latest in a series of moves by both sides as part of a diplomatic offensive that has tamped down tensions that raised fears of a nuclear war last year.

North Korea also has suspended nuclear and missile tests, blown up its nuclear testing site and begun razing facilities at a rocket launch complex. But experts say those moves are reversible, and recent reports suggest it is continuing to develop long-range missiles.

The U.S., meanwhile, halted joint war games with its ally South Korea that the North has long considered rehearsals for an invasion.

Otherwise, progress has been slow toward the main U.S. goal of persuading the communist state to abandon its nuclear weapons program, with no concrete measures or timelines nearly two months after the summit.

In Singapore, Kim and Trump also agreed to work toward the “complete denuclearization” and “a lasting and stable peace regime” for the Korean Peninsula, and to establish new relations.

‘Our boys are coming home’ The remains were formally received in Hawaii by Vice President Mike Pence and the top commander of U.S. forces in Asia, Adm. Phil Davidson, during an honorable carry ceremony at Joint Base Pearl Harbor-Hickam.

“Some have called the Korean War the ‘forgotten war.’ But today, we prove these heroes were never forgotten,” Pence said. “Today, our boys are coming home.”

Pence also hailed the return as a positive diplomatic step.

“We see today as tangible progress in our efforts to achieve peace on the Korean Peninsula. But today is just the beginning,” Pence said at the ceremony. “Our work will not be complete until all our fallen heroes are accounted for and home.”

Officials with the Defense POW/MIA Accounting Agency said a preliminary forensic review determined that the remains “are likely to be American,” but their identities may not be confirmed for months or years.

Scientists with the agency will study the bones and teeth and try to match DNA samples collected from families of the missing troops. North Korea also provided a single dog tag from an American soldier.

Reflecting the uncertainty, the remains were covered in blue U.N. flags to represent all 16 countries that sent troops to fight in the war, as they were loaded onto military transport planes at Osan Air Base, South Korea.

However, they were draped with American flags at the ceremony in Hawaii.

The DPAA says 7,699 U.S. servicemembers remain unaccounted for from the Korean War, with about 5,300 believed to have died on North Korean soil.