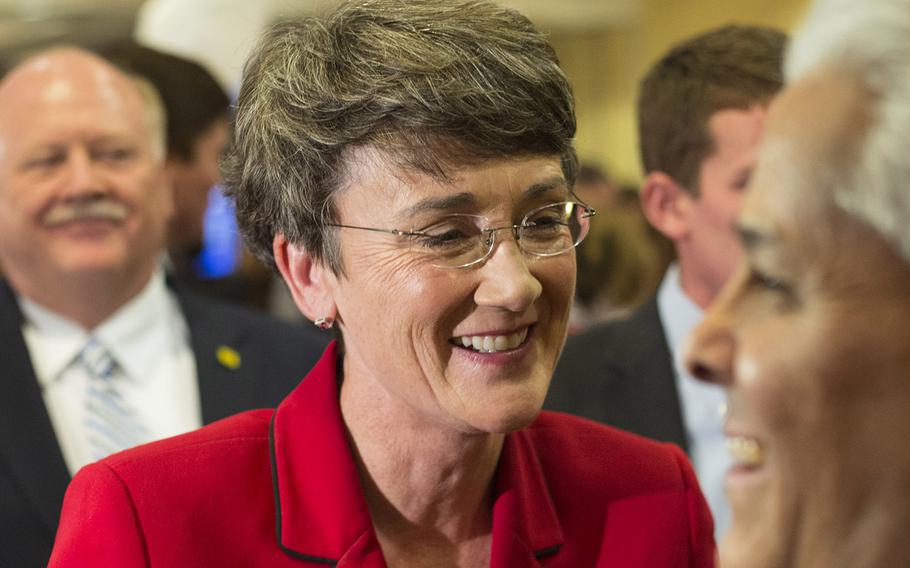 A Nov. 6, 2012 file photo of Heather Wilson at an event in Albuquerque, N.M. President Donald Trump has nominated Wilson to be secretary of the Air Force. (Jake Schoellkopf/AP)

Wilson, 56, graduated from the Air Force Academy in 1982, one of the first women to graduate from the academy after it was opened to female applicants in the late 1970s. The class of 1980 was the first at the academy to include women. After graduation she studied as a Rhodes Scholar, earning master's degree and a doctorate at Oxford University in England. Wilson later served in the Air Force in Europe and on the National Security Council for President George H. W. Bush through 1991.

Wilson, a Republican, represented New Mexico in Congress from 1998 through 2009. During her five terms in Congress, where she was a senior member of the House Energy and Commerce Committee and chaired the House Subcommittee on Technical and Tactical Intelligence. She also served on the House Armed Services Committee.

Since her time in Congress, she has been president of the South Dakota School of Mines & Technology.

Wilson collected nearly $500,000 in questionable payments from federally funded nuclear labs after she left Congress in 2009, the Energy Department’s inspector general said in a 2013 report. Wilson failed to provide documentation for the consulting work she did to earn $20,000 a month from the Los Alamos and Sandia national labs in New Mexico from January 2009 to March 2011, the report stated.

Contractors including Lockheed Martin and Bechtel reimbursed the government for most of the $464,203 paid to Wilson, the report said.

Wilson told The Associated Press in 2013 that the inspector general’s report “confirms that the labs were satisfied with my work. The work was done in full compliance with the contracts we signed and under the direct supervision of lab sponsors.”

“Heather Wilson is going to make an outstanding Secretary of the Air Force,” Trump said in a statement. “Her distinguished military service, high level of knowledge, and success in so many different fields gives me great confidence that she will lead our nation’s Air Force with the greatest competence and integrity.”

In the same statement, Wilson said: "I will do my best, working with our men and women in the military, to strengthen American air and space power to keep the country safe.”

Martinez, a Republican, said Wilson was instrumental in protecting the state’s military bases while in Congress, “and I know she will continue fighting for them in her new position. She will be an incredible asset for the new administration.”

Wilson is the daughter and granddaughter of aviators and an instrument-rated private pilot, according to the White House statement. She is married to Jay Hone, an attorney and retired Air Force colonel. They have three adult children.

Wilson's nomination must be approved by Congress.