Trump: NATO members short on defense spending to be 'dealt with' 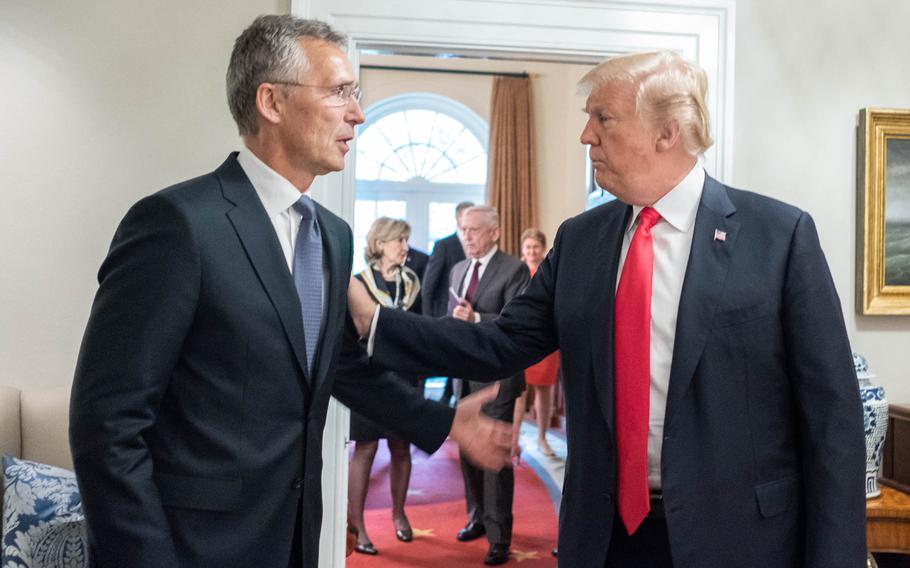 NATO Secretary-General Jens Stoltenberg and President Donald Trump at the White House, Thursday, May 17, 2018. In the background are Kay Bailey Hutchison, the U.S. Permanent Representative to NATO and Defense Secretary Jim Mattis. (NATO)

NATO Secretary-General Jens Stoltenberg and President Donald Trump at the White House, Thursday, May 17, 2018. In the background are Kay Bailey Hutchison, the U.S. Permanent Representative to NATO and Defense Secretary Jim Mattis. (NATO) President Donald Trump has issued a new warning to Germany and other NATO allies that they would be “dealt with” if they fail to comply with an alliance agreement to boost defense spending for their militaries.

Trump also singled out Germany for its military shortcomings and the country’s business dealings with Russia.

“Germany must demonstrate leadership in the alliance by addressing its longstanding shortfall in defense contributions. Germany has not contributed what it should be contributing, and it’s a very big beneficiary — far bigger than the United States, frankly,” Trump said Thursday during a meeting at the White House with NATO Secretary-General Jens Stoltenberg.

The president also complained Germany buys “massive amounts of gas from Russia and paying billions and billions of dollars.”

In July, Trump is expected to attend NATO’s major annual summit in Brussels, where the United States will again press members to ramp up spending. The lack of military investment among NATO’s European members has dominated Trump’s agenda with allies.

“They paid the number that they’re supposed to be paying,” Trump said. “We have some that don’t — and, well, they’ll be dealt with.”

He did not elaborate what measures would be taken to ensure compliance.

However, NATO’s European members were increasing their defense budgets before Trump took office. In 2014, concerns about a more aggressive Russia prompted members to agree that each nation in the alliance should hit the 2 percent target by 2024.

Germany, however, has indicated it will renege on that pledge, which is likely to emerge as a flashpoint when alliance leaders meet in July.

Earlier this week, officials in Berlin said they anticipated defense spending to be roughly 1.5 percent of GDP by 2025. The persistent spending shortfalls come at a time when Germany’s military is among the least combat-ready in NATO, with massive capability gaps on land, at sea and in the air.

Still, Stoltenberg said he has seen progress across the alliance in recent years as members have stopped cuts and steadily increased investments. NATO’s top official also credited Trump with bringing a sense of heightened urgency to the issue.

“On defense spending, I would say that I agree with you. We have to do more,” Stoltenberg said. “So your leadership on defense spending has really helped to make a difference, and that’s something I thank you for.”