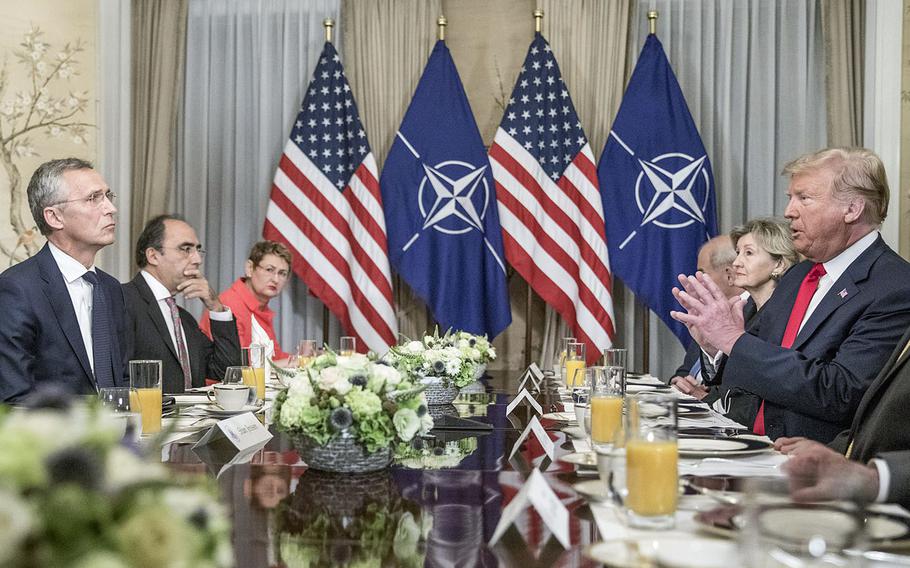 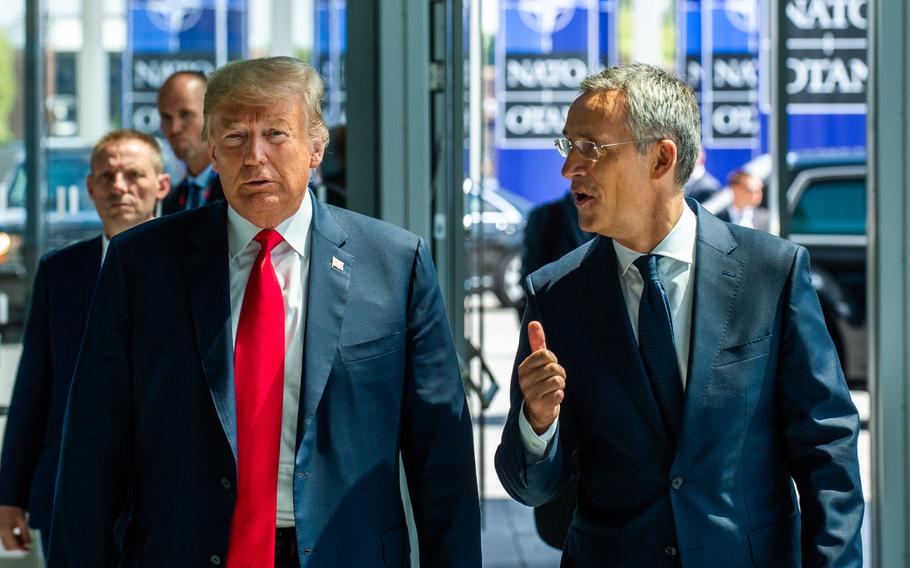 U.S. President Donald Trump with NATO Secretary-General Jens Stoltenberg at the arrivals of heads of state and government at the opening of the NATO summit at the organization's headquarters in Brussels on Wednesday, July 11, 2018. (Courtesy of NATO) 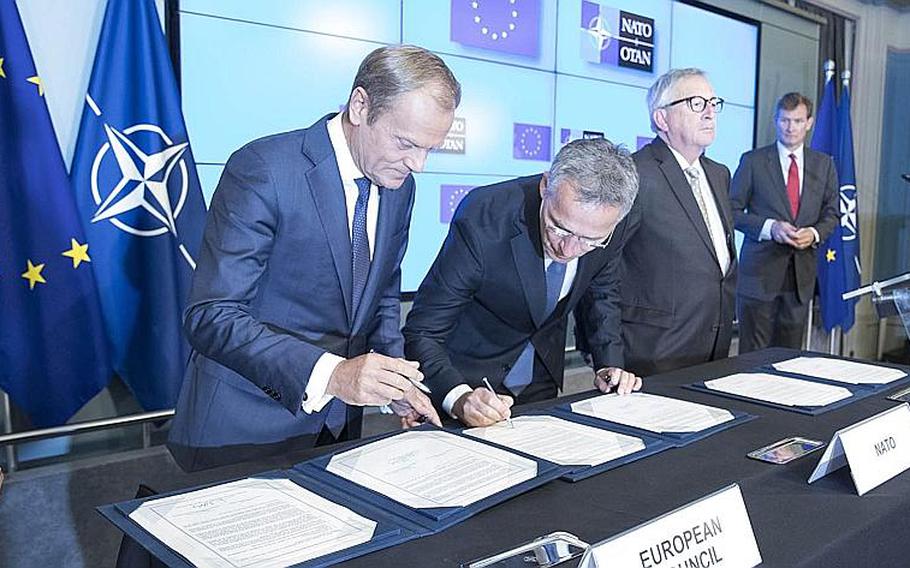 Donald Tusk, left, president of the European Council, and NATO Secretary-General Jens Stoltenberg sign a joint declaration on cooperation between NATO and the European Union on July 10, 2018. The following day, President Donald Trump began the first day of a NATO summit by blasting allies for not contributing enough spending. (NATO)

BRUSSELS — President Donald Trump opened a summit of NATO allies here Wednesday by blasting Germany as a “captive of Russia” and failing to meet its commitments to the alliance in what is expected to be the most contentious meeting of allies in years.

A trans-Atlantic showdown is now underway at NATO headquarters in Brussels, where gathering heads of state are facing intense pressure to ramp up military spending.

“They have to step it up immediately. Germany is a rich country. We are not going to put up with it,” Trump said during an opening meeting with NATO Secretary-General Jens Stoltenberg.

Trump, flanked by a stone-faced Defense Secretary Jim Mattis and Secretary of State Mike Pompeo, also criticized a multibillion dollar energy deal between Moscow and Berlin that he says NATO “needs to look at.”

“Germany is a captive of Russia,” Trump said.

In the buildup to NATO’s annual summit, Trump has delivered one rhetorical assault on the alliance after another as he hammers members for not spending enough on their militaries. In doing so, Trump also has said the U.S. benefits less from the military pact than Europe, which has fostered doubts about his commitment to collective defense.

Trump’s messages have roiled the 70-year-old alliance, where concerns about the president’s commitment to the future of NATO are now at a near-panic level in parts of Europe.

NATO Secretary-General Jens Stoltenberg said his goal for the summit is to keep allies unified despite their differences.

When pressed by reporters Wednesday on whether Trump’s tough rhetoric is tearing the alliance apart, Stoltenberg acknowledged differences within NATO but avoided criticizing Trump.

“My task is to make sure we stick together,” Stoltenberg said. But he acknowledged that NATO’s long-term survival shouldn’t be taken for granted.

It is not a law of nature that we will have NATO forever,” he said.

To quell doubts about American commitment to NATO and security in Europe, the U.S. Senate on Monday voted 97-2 to reaffirm the country’s commitment to the alliance.

Still, Trump’s ambivalence about NATO and an upcoming meeting with Russian President Vladimir Putin that Trump said would be the “easiest” of meetings on his European tour has caused consternation.

In Brussels, think tanks with a pro-NATO bent have assembled on the sidelines of the summit to mount a defense of the alliance’s values and the role it plays in global security.

The overall anxiety was captured in a July 9 open letter to heads of state by scores of former alliance officials that included former NATO supreme allied commanders Philip Breedlove, James Stavridis and other generals and diplomats.

“NATO is at a crucial decision point,” the letter stated. “If NATO were to fail because of short-term political frictions, the loss would not only be felt by the allies but by freedom-loving peoples the world over, as they could no longer rely on this anchor of legitimate security.”

“Europeans need to spend more on defence,” Rassmussen said in a Wednesday tweet. “But to pretend the USA doesn’t gain from NATO ignores 70 years of relative peace that enabled the USA to become the strongest, richest power on earth.”

During the two-day summit, allies finalized plans to build two new commands — one in Germany and the other in the U.S. — to ensure that their militaries can quickly deploy forces across land and sea borders in a crisis.

To improve combat readiness, participants also adopted the so-called “Four Thirties” initiative that calls for 30 mechanized battalions, 30 air squadrons, and 30 combat vessels to be ready for deployment within 30 days. The readiness plan is to be in effect by 2020.

The moves are a continuation of reform inside NATO brought on by Russia’s 2014 intervention in Ukraine, which sparked the alliance’s largest military reinforcement since the end of the Cold War.

Allies also agreed launch a new training mission in Iraq that will involve sending hundreds of military trainers to the country. Canada offered to lead the effort.

Nevertheless, defense spending will dominate discussions behind the scenes.

Hours after Trump’s broadside against Germany, Pompeo sought to signal unity by calling NATO “the most successful alliance in history.”

“All NATO allies have committed to extending this success through increased defense spending, deterrence and defense, and fighting terrorism. Weakness provokes; strength and cohesion protects,” Pompeo said in a tweet.

Stoltenberg said Tuesday that allies are going in the right direction. In 2017, members posted the largest collective defense spending increase since the end of the Cold War and eight member states are expected to meet NATO spending benchmarks in 2018, he said.

“I would like to thank President Trump for his leadership on defense spending,” Stoltenberg said. “It is clearly having an impact.”

However, nearly half of allies still do not have concrete plans for dedicating 2 percent of GDP to their respective militaries, a target agreed upon by NATO in 2014. Another point of contention is that economic powerhouse Germany is among those still falling short, even though Berlin has stated it will ramp up defense spending 80 percent by 2025.

Trump has repeatedly highlighted Germany’s trade surplus with the U.S. and its lack of defense contributions as evidence of American taxpayers getting taken advantage of.

“We are the schmucks who pay for the whole thing,” Trump said last week.

But as Trump has ratcheted up his criticisms of Germany and its chancellor, Angela Merkel, popular support in that country for increasing defense expenditures is on the decline.

Merkel and Trump were slated to meet Tuesday in a one-on-one session.

In brief remarks upon her arrival in Brussels, Merkel did not directly address Trump’s earlier remarks that Germany was “captive” of Russia.

“We make our own policy and make independent decisions,” Merkel said.

After their meeting, it was all niceties between Trump and Merkel.

“We have a very, very good relationship with the chancellor,” Trump said.