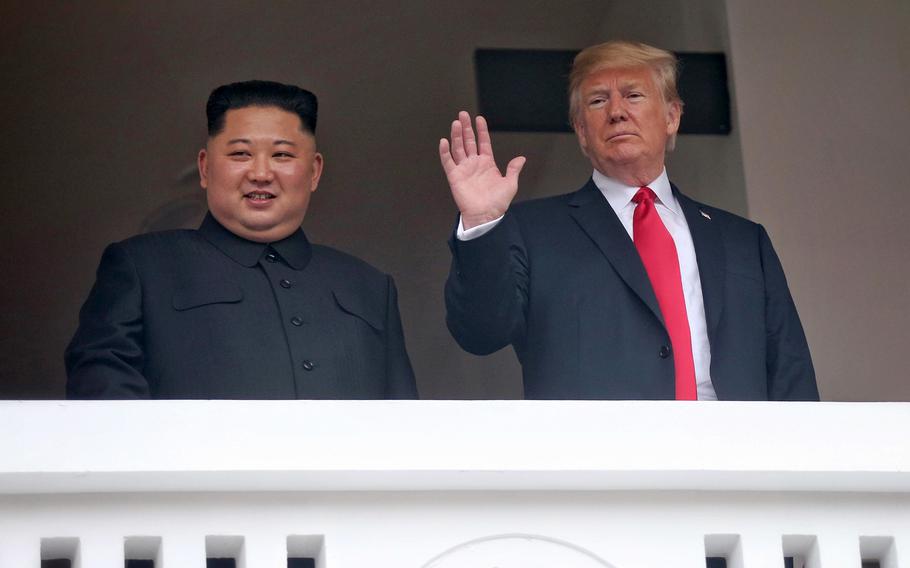 The agreement was one of four points included on the final document signed by the two leaders as they wrapped up their historic summit in Singapore.

During a news conference Tuesday, Trump said he received “countless calls and letters” from family members asking for help obtaining remains. He brought up the issue with Kim at the "very last minute," he said.

“Even during the campaign, they’d say, ‘Is there any way you can work with North Korea to get the remains of my son back or my father back?’ So many people asked me this question,” Trump said. “And, you know, I said, ‘Look, we don’t get along too well with that particular group of people.’ But now we do. And he agreed to that so quickly and so nice – it was really a very nice thing.”

Remains of an estimated 5,300 missing American servicemembers are in North Korea and potentially recoverable. But efforts to find them stalled as tensions rose over the North’s nuclear weapons program.

The two sides “commit to recovering POW/MIA remains, including the immediate repatriation of those already identified,” read the document, which was displayed by Trump at the ceremony.

The document didn’t provide details or a timeline, but it was a start for veterans groups that had lobbied for the issue to be included on the summit agenda.

It also would be a tangible takeaway for Trump from his detente with Kim, which so far has led to few definitive measures by the North.

North Korea also freed three American detainees and let them leave with Secretary of State Mike Pompeo last month as a goodwill gesture ahead of the summit.

The Veterans of Foreign Wars sent a letter to Trump on Wednesday asking him to raise the issue.

“As the leader of the free world, we urge you to do everything in your power to ensure that those who paid the ultimate price for freedom during the Korean War are finally returned home to their families,” wrote the group’s chief, Keith Harman.

The letter was also sent to Pompeo and Defense Secretary Jim Mattis.

The VFW said the return of missing servicemembers was of “paramount importance” to the Kansas City, Mo.-based organization.

“For the families of those who never returned, the passage of time does not heal their wounds,” Harman wrote. “For them, the days became weeks, and the weeks became months, then years, and now, sadly, decades.”

Following the summit, Harman commended Trump and Kim for agreeing to recover the remains, but he remained hesitant. He alluded to the work that still needed to be done to arrange details of potential recovery operations.

“We must have hope that this agreement will finally bring peace to the peninsula and help bring closure to thousands of families of missing American servicemen from the Korean War,” Harman said in a statement. “The VFW salutes President Trump for bringing this issue to the table, and we thank the North Korean leader for agreeing to it. Now the hard work to bring the initiative to fruition begins.”

According to the Defense POW/MIA Accounting Agency, 7,702 American servicemembers remain unaccounted for from the Korean War.

Joint U.S.-North Korean military search teams recovered 229 sets of American remains from North Korea between 1990 and 2005. The United States was allowed to conduct 33 investigative and recovery operations in the country before former President George W. Bush’s administration called off the search, claiming the safety of American participants was not guaranteed.

South Korea is also aiming to use the burgeoning goodwill with the North to ask for permission to recover its war dead.

President Moon Jae-in said earlier this month that he hoped North Korea would allow teams to retrieve remains from the Demilitarized Zone.

South Korea still has more than 120,000 unaccounted for troops from the Korean War.

“When the South-North relations improve, we will push first for the recovery of remains in the Demilitarized Zone,” Moon said, referring to the heavily fortified border that divides the peninsula.

“We will also be able to retrieve the remains of U.S. and other foreign soldiers who participated in the war,” he added.Stars and Stripes reporter Nikki Wentling contributed to this report.gamel.kim@stripes.comTwitter: @kimgamel