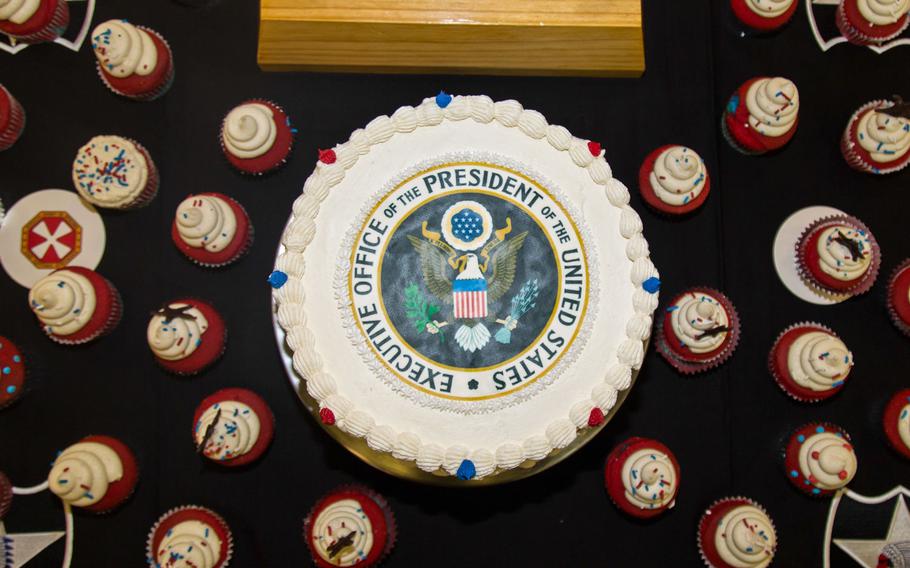 A special cake and cupcakes were on hand during President Donald Trump's lunch with trrops at Camp Humphreys, South Korea, Tuesday, Nov. 7, 2017. (Marcus Fichtl/Stars and Stripes)

A special cake and cupcakes were on hand during President Donald Trump's lunch with trrops at Camp Humphreys, South Korea, Tuesday, Nov. 7, 2017. (Marcus Fichtl/Stars and Stripes) 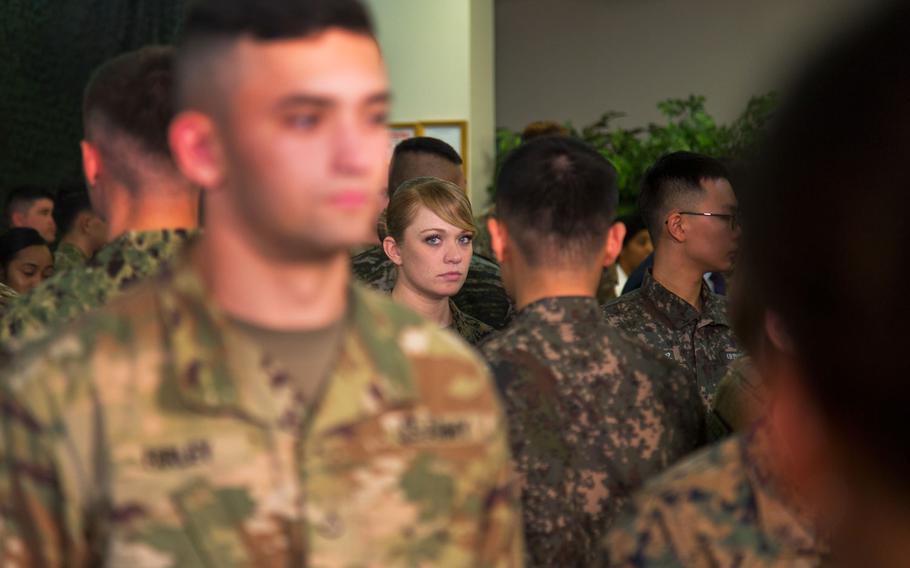 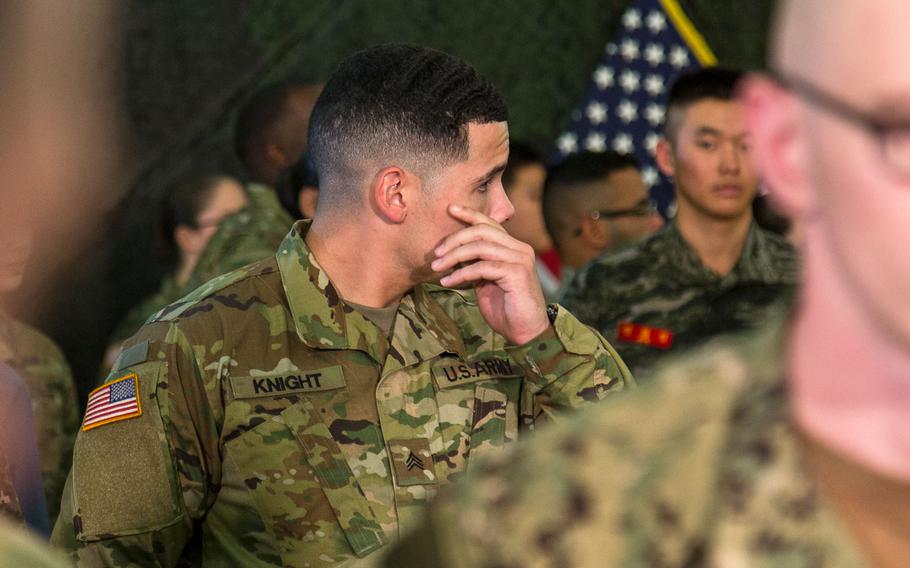 The American soldier who sat next to President Donald Trump during lunch at Camp Humphreys, South Korea, waits for the U.S. leader to arrive, Tuesday, Nov. 7, 2017. (Marcus Fichtl/Stars and Stripes) CAMP HUMPHREYS, South Korea — U.S. troops who had lunch with President Donald Trump on Tuesday at a military base in South Korea say he told them there was no place he’d rather be.

Pvt. Merion Holmes, 21, of Georgetown, S.C., said he was honored to see the president in person and found Trump’s words motivating.

“He said he’d rather eat with the troops than at a fancy restaurant,” Holmes told Stars and Stripes after the president’s 20-minute appearance. “It made me feel like he cared.”

Trump flew to Humphreys in a helicopter shortly after landing at Osan Air Base on Tuesday to begin his visit to South Korea, the second leg of his first official visit to Asia.

The soldiers, Marines, airmen and sailors who had waited for more than an hour applauded as Trump and Moon entered the cafeteria and sat down in pre-arranged seats at a long table.

“Hello everybody; good food,” Trump said to reporters before turning his attention to his dining companions.

Marine Sgt. Cortney Wells, 25, of Villa Ridge, Mo., said she was humbled to have been chosen to sit near Trump. She noted that the two presidents talked to each other about relations between their countries and other issues.

“With everything going on I know people at home are concerned. I think it’s great, especially for the alliance, that both presidents are going to be here together,” she said.

The menu was as it always is on Tuesday — Mexican food. Trump had tacos, a burrito and curly fries.

Sgt. 1st Class Michael Banegura, manager of Provider Grill as the dining facility is known, said he gave Trump’s team other choices but was told the president would eat the same thing as the troops.

Sgt. Jerrell Knight of Atlanta traveled from his base at Yongsan Garrison in Seoul to find himself sitting next to the president.

“I’m very excited and nervous,” he said before lunch. “I get to meet my commander in chief, my boss. It’s pretty overwhelming to be right next to the president.”

Later, Knight said Trump talked about the importance of the U.S.-South Korean alliance and the need to resolve the growing threat from North Korea.

“I feel it’s a great opportunity to bring our two nations together,” he said, adding Trump also thanked him for his service and shook his hand.

The troops came from across the peninsula and all branches of service.

Seaman William Carlisle, 25, of Pickerington, Ohio, said he was excited to sit across from the president.

“To actually be at the front and center of something like this and to literally watch history unfold is awesome,” said Carlisle, who is based at the southern port of Busan.

He then took a helicopter to Seoul for a summit with Moon and a state banquet. His visit ends Wednesday with an address to the National Assembly after which he’ll travel to China.