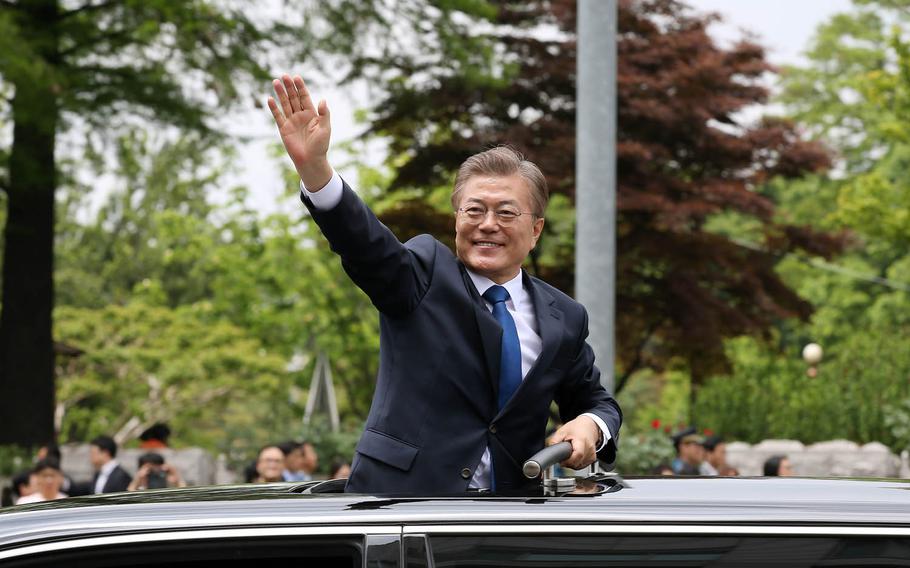 President Donald Trump congratulated Moon on his victory in Tuesday’s snap election and invited South Korea’s new leader to visit the White House. Moon accepted the invitation at an “early date” but no specific time was set, according to a statement.

Moon, a former human-rights lawyer, also stressed the importance of the decades-old alliance between the two countries amid concerns that they may face friction over how to deal with North Korea.

“The South Korea-U.S. alliance is more important than at any other time given the growing uncertainties over the security situation of the Korean Peninsula,” Moon said, according to a statement from the presidential office.

Trump has raised the possibility of military action and pushed for tougher economic sanctions and new diplomatic measures to force North Korea to abandon its nuclear weapons program.

That may set up a possible dispute with Seoul as Moon favors talks with the North and has said he would re-establish trade ties between the two countries, which remain technically at war after their 1950-53 conflict ended in an armistice instead of a peace treaty.

In his inaugural address Wednesday, South Korea’s president said he would consider visiting Pyongyang under the right conditions.

Moon also has said he would reconsider the deployment of a controversial U.S. missile defense system known as THAAD, which was installed on the divided peninsula based on an agreement with ousted President Park Geun-hye.

With only an acting president in place for several months, South Korea has found itself caught between the U.S. and China on the diplomatic and economic front.

Trump has called on Beijing to do more to rein in North Korea, while China is angry over THAAD, which it be-lieves could pose a threat to its military.

Chinese President Xi Jinping also called to congratulate the new South Korean leader on Thursday, the pres-idential office said, adding it was the first time a Chinese leader had ever done so.

The two sides agreed on the importance of denuclearizing the peninsula. Moon also appealed to Beijing to stop its apparent economic retaliation against South Korean businesses over THAAD.

In a thornier conversation, Moon suggested he may scrap an agreement with Japan over that country’s sexual enslavement of Korean women during World War II, according to the Yonhap news agency.

The dispute could complicate what has been a growing alliance between the countries, although Moon also stressed that historical problem should not hinder bilateral relations on other issues.

“He said he saw a need for the two countries to work together and wisely overcome historical disputes, including the comfort women issue, while separately continuing their joint efforts to deal with the North Korean nuclear issue,” Moon’s chief press secretary Yoon Young-chan was quoted as saying.

Moon’s victory reverses more than a decade of conservative rule that has seen strong ties with the U.S., which maintains about 28,500 servicemembers in South Korea.

Park, who was ousted and faces trial over a corruption and influence-peddling scandal, favored a tough stance against the North, including punishing U.N. economic sanctions and diplomatic pressure.

North Korea on Thursday urged Moon’s government to end what it considers confrontational policies, including joint drills with the U.S. military.

“The two Koreas should respect each other and open a new chapter to move toward an improvement of their ties and inter-Korean unification,” the official Rodong Sinmun newspaper said, according to Yonhap.

“North and South Korea should seek dialogue and negoti-ations at various levels,” it added.

Many of the missile tests were considered failures, but experts have said Pyongyang is making faster-than-expected progress toward its stated goal of developing a nuclear-tipped missile that could reach the U.S. mainland.