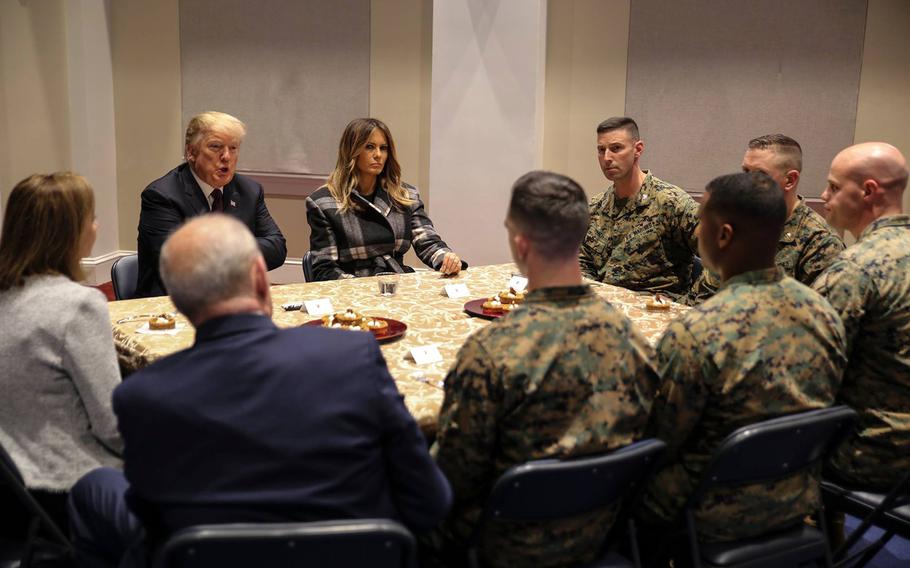 President Donald Trump and First Lady Melania Trump visited the Marine barracks at 8th and I in southeast Washington, D.C., followed by an event at the White House for veterans and military families. (U.S. Marine Corps photo)

WASHINGTON — President Donald Trump, slammed with a barrage of criticism for skipping ceremonies honoring the military veterans in Paris and Washington during the Veterans Day weekend, hosted several events Thursday focusing on current and former servicemembers.

In brief remarks during a daylong White House conference, Trump took credit for several ongoing programs and accomplishments that serve the military and veterans.

“Fact is I’ve done a lot,” he said to a filled auditorium at the Eisenhower Executive Office Building just west of The White House. “I’ve done so much I could leave now.”

In addition to conference attendees, several White House officials were present in the South Auditorium during the remarks, including his adviser Kellyanne Conway and Department of Veterans Affairs Secretary Robert Wilkie. Trump remarked Wilkie was “doing a great job.”

“This is a tremendously important group of people to me, America’s veterans, these are special people,” Trump said in welcoming conference guests, who included Labor Secretary Alex Acosta.

Trump claimed he was overseeing a great economy, lauded the veterans’ unemployment rate and praised the VA Accountability Act signed into law last year and the VA Choice program, an effort passed in 2014 to let veterans seek private medical care, which was expanded through the VA Mission Act this year.

He also praised other efforts, such as the White House veterans hotline center in Shepherdstown, W. Va., launched under his administration. However, the hotline is not operated by the White House but instead it is handled by VA employees.

Trump also said his administration has improved access to education benefits for veterans. However, his effort to expand G.I. Bill benefits has been hampered by widespread information technology failures that have kept education stipends from servicemembers months into the current fall semester.

He also lauded the $716 billion defense budget signed into law this year for the 2019 fiscal year. However, the Pentagon is now facing a White House request to install a dramatic slash in spending, with current plans to roll out two proposed budgets for fiscal year 2020 of $700 billion or $733 billion.

“And we’re not finished yet…We never will be finished," Trump said.

He also said his administration will continue to work on a “top priority” addressing veteran mental health and suicide prevention as well as boosting military spouse employment.

Trump said veterans appreciate what his administration is doing for them.

Earlier Thursday afternoon, Trump and First Lady Melania Trump visited the Marine barracks in southeast Washington followed by an event at the White House on veterans and military families. However, Trump has yet to visit troops deployed overseas or the more than 5,000 servicemembers recently deployed to the U.S.-Mexico border, which also has generated criticism for the president.

“I am steadfastly committed to ensuring our veterans and their families receive the care and support they deserve,” the president said in a statement released ahead of Thursday’s events.