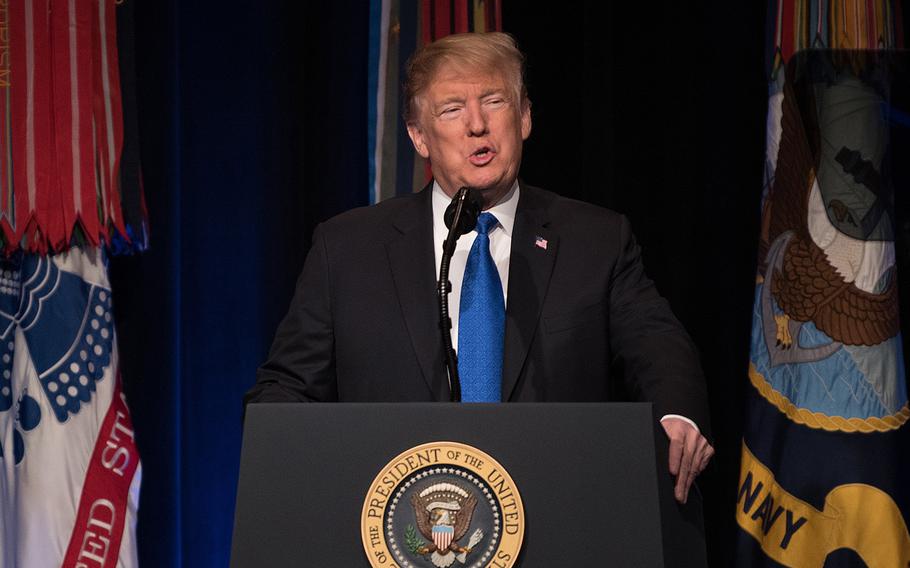 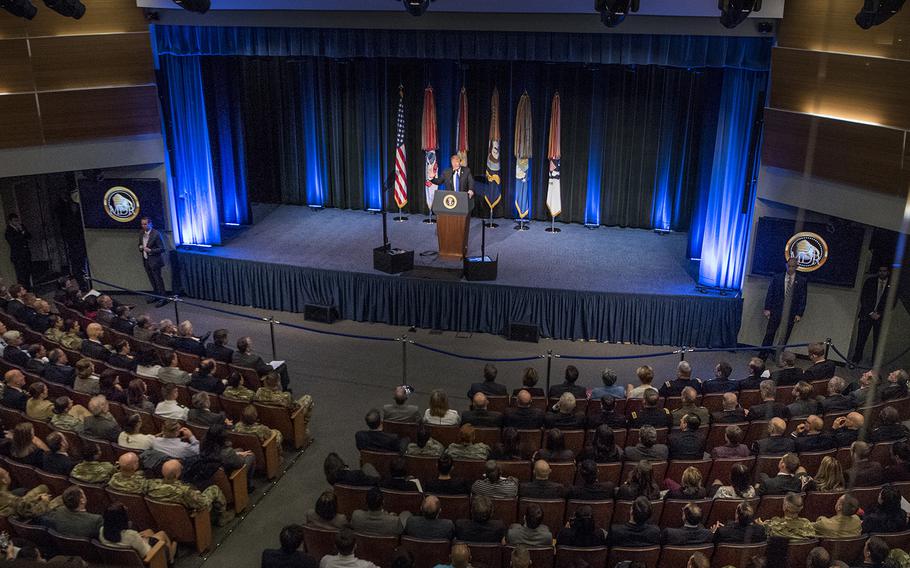 WASHINGTON — The United States will invest heavily in studying new technologies capable of defending the U.S. mainland against all current and future missile threats, including advanced hypersonic missiles under development by competing countries, President Donald Trump said Thursday in a speech at the Pentagon.

The president's announcement marks a change in the U.S. missile defense system's long-held commitment to protect the country only from ballistic missile threats, which have been typically associated with rouge nations such as North Korea, represents a marked shift in philosophy for the United States, senior defense officials said following Trump’s address.

“This is the start of a new era in missile defense – the next era in missile defense,” John Rood, the Pentagon’s policy chief, told reporters Thursday afternoon. “It’s the expansion of coverage and … a reflection of the security environment we are operating in. Over the last couple of decades we’ve seen an evolution of the missiles threat facing the United States.”

The changes are outlined in the 2019 Missile Defense Review released Thursday alongside Trump’s third visit to the military’s Arlington, Va. headquarters. In addition to announcing the shift in policy, the report also calls for the Pentagon to study a variety of potential technologies that could be used in the future to aid the detection and the destruction of incoming munitions, including space-based defensive weapons using projectiles or lasers.

In his address, Trump called out Iran as developing ballistic missiles capable of reaching the U.S. mainland while avoiding the names of other countries that already possess the ability, including North Korea, Russia and China.

Trump’s speech, which also touched on his priority to build a wall on the U.S.-Mexico border and at times was critical of Democrats and NATO partner countries including Germany, came just after the Pentagon released the long-anticipated, 80-page review. The report, ordered by Trump in the early days of his presidency, was delayed more than one year due to changes in its scope and concerns by some officials that it could damage ongoing nuclear negotiations with North Korea, defense officials said.

Rood on Thursday defended the delays, saying officials needed time “to get it right.”

It is the first official review of America’s missile defense posture since 2010 and looks at the U.S. ability to defend itself against ballistic missiles, cruise missiles and hypersonic missiles, which are capable of traveling in excess of Mach 5 and are being developed in Russia and China. The 2010 review only considered ballistic missiles, officials said.

The president announced he would seek a large investment in missile defense capabilities in his fiscal year 2020 budget proposal expected to be released next month. However, Trump and other senior officials declined to provide estimates on the amount of money that they wanted to fund new weapons systems and research into potential future programs.

Trump did announce Thursday that the United States will add 20 new ground-based interceptors to Fort Greely in Alaska. The Missile Defense Review calls for adding at least 40 more of those anti-ballistic missile systems, a defensive weapon that Rood said has been proven effective against particular threats, namely the dangers posed by North Korea’s existing weapons.

Among the options under consideration to protect the U.S. mainland from increasing missile threats are adding a third location of ground-based missile interceptors to ones already based in Alaska and the four located in California, said Air Force Lt. Gen Samuel A. Greaves, the director of the Missile Defense Agency. He said several locations, including some in the eastern United States, were under consideration. His agency in the past listed military locations in Ohio, Michigan and New York as finalists under consideration.

The United States’ layered anti-missile system includes land-, sea-, and space-based elements that detect, track and target incoming missiles and is capable of defending against a limited attack using intercontinental ballistic missiles, weapons that can travel more than 3,400 miles. But America still relies primarily on diplomacy and deterrence to dissuade attacks by more modern weapons under development by nations such as Russia and China, defense officials have said.

“Effective deterrence is the preferred strategy to prevent missiles attack … however, a broader approach is required to address the increasingly complex missile threat environment,” reads a summary of the report released Thursday.

The “multi-layers approach to preventing and defeating missiles attacks will move the United States towards a more flexible and balanced overall defense posture that provides that broadest set of options in a crisis or conflict and improve the overall likelihood to counter offensive missile attacks successfully,” the report states. “To do so, the United States will integrate active missile defenses with intelligence, surveillance and reconnaissance and strike capabilities to counter regional offensive missile threats and rogue missile threats to the homeland.”

While space-based, anti-missile systems remain years off, according to the report, the United States must invest in the development of such technology now to ensure it can keep up with Russia and China, the latter of which has already demonstrated advanced technology in space, including the ability to disable satellites.

The military’s use of space has long been a top priority for Trump, who again said Thursday that the Pentagon would create a new military service, the Space Force, which would lead the way in the extraterrestrial “warfighting domain.”

“A space-based missile defense layer … is going to be a very, very big part of our defense,” Trump said. “And obviously of our offense.

“We will ensure enemy missiles find no sanctuary on Earth or the skies above. This is the direction I am heading. We have some very bad players out there. We are a good player. If need be, I’ve always known, and I’ve been watching and I’ve seen that the stronger you are, the less you will need whatever that strength may be.”

The Pentagon is already working on improving space-based missile defense, said Michael Griffin, the Pentagon’s research and engineering chief. That begins with a series of satellite sensors in low orbit that could identify and continuously track any missile launched across the globe. Congress mandated the Pentagon begin examining how to deploy the new sensors within the next year, and the Defense Department is starting that in 2019, Griffin said. He predicted such a constellation of missile sensor satellites could exist within the next five years.

“You will see that in the budget,” he said. “Beyond that, we have the issue of space-based interceptors, where we have another study [to determine] the costs, the effectiveness, the considerations we are going to need to make.”

“I am especially encouraged by its emphasis on advanced technology development that will ensure a continued focus on modernization efforts to maintain, and in some cases establish, a competitive advantage relative to our adversaries who are advancing rapidly,” Inhofe said in a statement.

Top Democratic officials were less welcoming of the report.

Missile defense “isn’t a magic bulletproof shield and it comes with a considerable price tag,” Reed said in a statement. He added the report “reinforces the need to focus on realistic threats now while further studying the feasibility of advanced technologies, including those in space. Integrated, space-based capabilities are certainly worth exploring, but we don’t have unlimited resources, so we must weigh investments among competing national security priorities. Congress needs to carefully study these recommendations and get more answers about success rates, costs, and a host of issues.”

Smith said scarce taxpayer dollars need to be put to good use, rather than rushing to buy and deploy an unproven missile defense systems. And he remains gravely concerned with Trump’s broader strategy to withdraw the United States from international arms control agreements, his dismissal of allies and expanding the role of nuclear weapons, further siphoning funds from bigger budget priorities.

“We must avoid missile defense policies that will fuel a nuclear arms race,” Smith said Thursday in a statement. “While it is essential that we continue investing in proven missile defense efforts, I am concerned that this missile defense review could lead to greater investment in areas that do not follow these principles, such as a space-based interceptor layer that has been studied repeatedly and found to be technologically challenging and prohibitively expensive.”