Trump considers moving up to 2,000 troops to Poland as Polish president agrees to buy F-35s 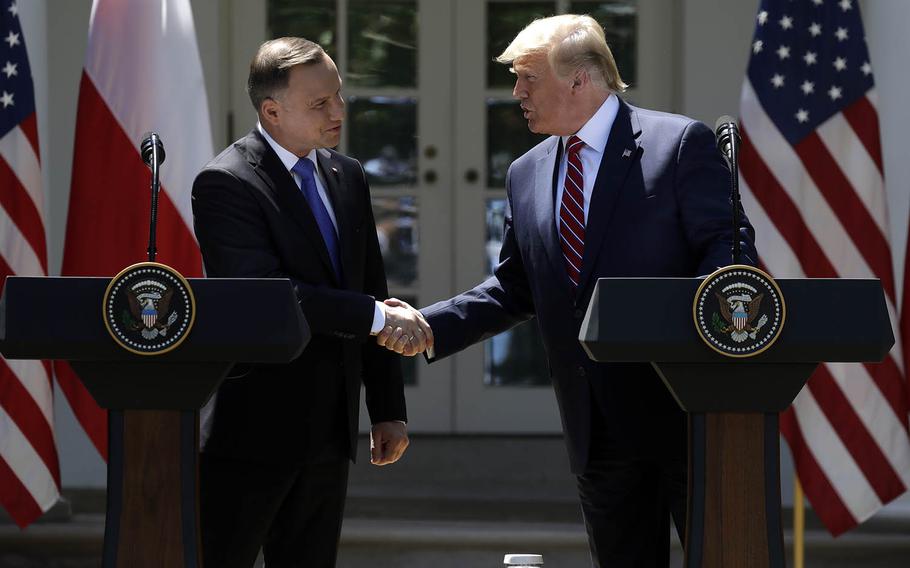 President Donald Trump shakes hands with Polish President Andrzej Duda during a news conference in the Rose Garden of the White House on Wednesday, June 12, 2019, in Washington. (Evan Vucci/AP)

President Donald Trump said Wednesday that he is considering a move of up to 2,000 troops from Germany to Poland, a country that had proposed building a “Fort Trump” in hopes of luring the United States to base a larger American military force there.

“It’ll be no additional troops in Europe. We will be moving them from another location in Europe,” said Trump, who singled Germany out as the likely location for a withdrawal.

Trump was in Washington, speaking alongside Polish President Andrzej Duda, who has long sought more U.S. troops in his country as protection against potential Russian aggression.

“It is going to be an enduring [U.S. military] presence that will hopefully increase gradually,” Duda said.

Trump said nothing has been finalized but added Poland would build some type of new military facility to accommodate U.S. troops.

“Poland is going to build a phenomenal facility in a beautiful location,” Trump said at the White House. “The facility itself will be world class.”

An hour after making his comments inside the White House, Trump, speaking in the Rose Garden, adjusted the troop number, creating confusion when he said it could be 1,000 troops bound for Poland. Trump added Poland will pay the associated costs to develop basing.

Last year, Duda said Poland was willing to spend up to $2 billion for a U.S. base and suggested calling it “Fort Trump.”

Coinciding with the troop announcement, Trump said Poland has ordered up to 35 “brand new” F-35 fighters from the United States. In honor of the agreement, an F-35 flew over the White House during Duda’s visit.

“I congratulate you on that (purchase),” Trump told Duda. “It means you have good taste.”

Though details about the troop movement in Europe remain unclear, Trump has criticized Germany for missing a NATO spending benchmark that calls for dedicating 2% of gross domestic product to defense.

“Germany is not living up to what they should be doing, but Poland is paying the max,” Trump said.

The president also said the roughly 52,000 troops in Germany have been there “a long, long time.” Official military figures estimate about 35,000 troops in the country.

“We are protecting Germany from Russia and Russia is getting billions and billions (of dollars),” Trump said.

Though Trump commented Wednesday that 2,000 U.S. servicemembers could move to Poland, a U.S. official told Stars and Stripes on Tuesday that it could be 1,000 troops.

There already are about 4,500 American troops in Poland on a rotational basis, and the additional 1,000 servicemembers were to be sent to “enhance mutual interoperability” between the two militaries, the official said.

“We believe it’s going to significantly enhance our military-to-military relationship but also enhance the defense-and-deterrence posture in Europe … and our commitment to NATO,” a senior White House official said ahead of the announcement during a conference call with reporters.

Trump’s comments Wednesday highlight confusion within the administration about the direction of the military’s force posture in Europe. In February, the U.S. ambassador to NATO, Kay Bailey Hutchison, said American forces wouldn’t be pulled out of Germany if the U.S. military expands in Poland.

“It would not be at the expense of Germany,” Hutchison told reporters at the time.

Duda’s official website detailed the types of missions that U.S. forces would be conducting, which are largely in line with what Polish officials have been saying for months about the enhanced American presence. In most cases, the increases build upon missions already being conducted in the country by U.S. forces.

The United States also will set up a division headquarters in Poland, according to the website. However, the U.S. Army already has a "mission command element" headquarters in Poznan, Poland to oversee Army operations in the country and that could be expanded.

Since Poland suggested building a “Fort Trump,” there has been a debate among security analysts and military officials about the merits of adding more troops.

Critics argue deploying large numbers of ground forces would lead to an escalation with Russia and would cause divisions among allies such as France and Germany, which see such a move as overly provocative. Supporters contend Moscow’s decision to rewrite the map of Ukraine with its 2014 annexation of Crimea justifies a larger NATO force in Poland to deter Russian military adventurism.

Sen. Jim Inhofe, R-Okla., chairman of the Senate Armed Services Committee, said Wednesday that he approved of the agreement between Trump and Duda.

“[It’s] a clear message to [Russian President Vladimir] Putin that we’re serious about deterring Russian aggression,” Inhofe said in a prepared statement. “Going forward, I urge the Department of Defense to continue its focus on options for improving U.S. force posture in Europe, as well as the Indo-Pacific region, in accordance with the National Defense Strategy.”

Though Trump did not elaborate on the types of units that could mobilize, the U.S. official said Tuesday that they are likely to be weighted toward logistics specialties.

The additional troops in Poland “would potentially focus on providing additional defense and deterrence capabilities in Poland including training, advisers, ISR [intelligence, surveillance and reconnaissance] and sustainment support,” the official said ahead of Trump’s announcement.