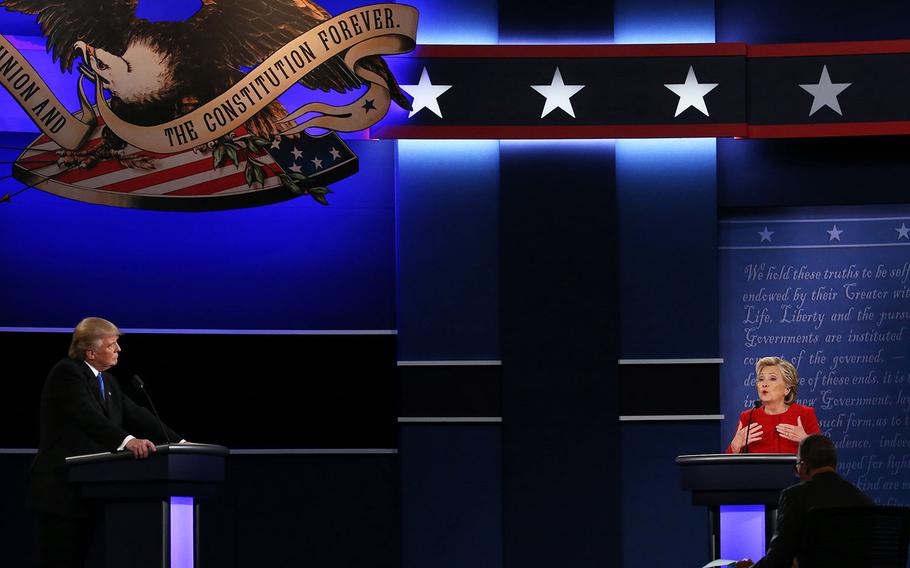 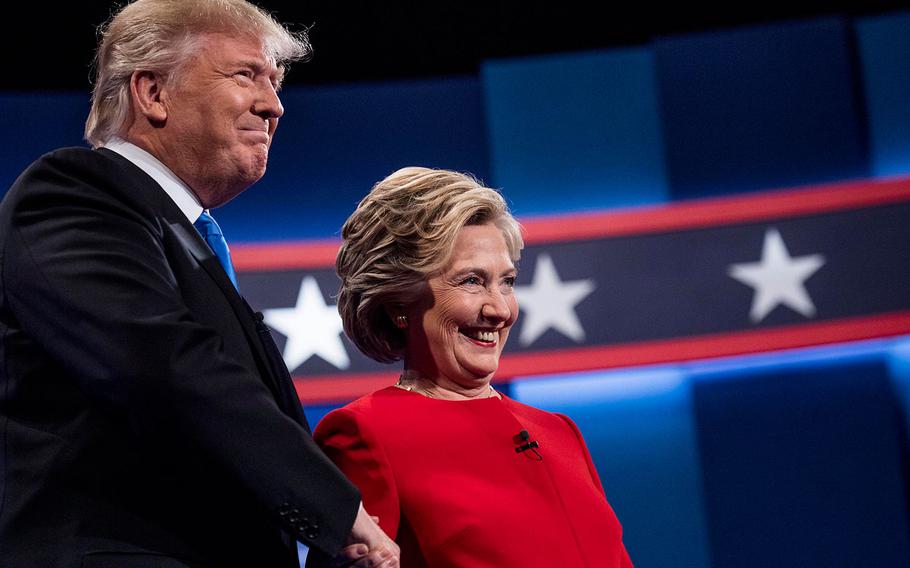 WASHINGTON — Sparks flew as Hillary Clinton and Donald Trump clashed over Islamic State war plans, the NATO alliance and the war in Iraq on Monday during the presidential candidates’ first meeting on a debate stage.

A polished Clinton appeared to rattle Trump at times as the real estate mogul attempted to pin years of military interventions abroad and lopsided security treaties on the former secretary of state. However, the debate, full of fiery exchanges, did not touch on other issues for the military community such as caps on defense spending or the country’s troubled veteran health care system.

The high-stakes debate – anticipated by tens of millions of voters – showed Clinton, a lifelong politician and the first female presidential nominee for a major party, and Trump, a brash businessman and reality television star, finally sparring after 18 months on the campaign trail. It came as polls showed Clinton losing her lead over Trump in the preceding weeks and an election race that was a “dead heat” by the time the candidates took the stage Monday, according to a Quinnipiac University poll.

Islamic State strategyClinton and Trump traded barbs repeatedly during about 100 minutes of debate. One exchange over the war on the Islamic State group erupted in the middle of a discussion on tax policy.

“Just go to her website, she tells you how to fight [the Islamic State group] on her website,” Trump said. “I don’t think Gen. Douglas MacArthur [a five-star general and Pacific commander during World War II] would like that too much.”

Clinton shot back at Trump, saying, “At least I have a plan to fight [the Islamic State group],” a dig at his claim on the campaign trail that he has a secret strategy to stamp out the terrorist organization.

As the moderator tried to move the debate to the next topic, Trump continued by claiming Clinton was tipping her hand by publishing her own plans.

“See, you are telling the enemy everything you want to do, no wonder – no wonder you have been fighting [the Islamic State group] your entire adult life,” Trump said.

“Please, the fact checkers, get to work,” Clinton said.

Allies in the Middle EastThroughout the debate, Clinton attempted to highlight her expertise as a senator and secretary of state, the country’s top diplomat, while portraying Trump as intemperate and risky for the country when it comes to alliances and the fight against the Islamic State and terrorism.

“We're working with our friends in the Middle East, many of which, as you know, are Muslim majority nations,” she said. “Donald has consistently insulted Muslims abroad, Muslims at home, when we need to be cooperating with Muslim nations and with the American Muslim community.”

Trump repeatedly called Clinton out for spending decades in positions at the height of political power while problems of security and global unrest grew. He panned her comments as “nothing but sound bites” and painted her as a career politician who helped created many of the country’s problems.

“The secretary said very strongly about working with [Muslim allies] … We've been working with them for many years, and we have the greatest mess anyone's ever seen,” he said. “You look at the Middle East, it's a total mess. Under your direction, to a large extent.”

NATO allianceTrump said he supports a more balanced approach when partnering with other nations including asking more from old partners in Europe and the Pacific, such as Japan and South Korea.

He attempted to clarify his position on the 67-year-old NATO alliance with Europe after saying earlier in the campaign that he would consider reneging on the joint security pact if other member countries did not contribute more military spending. Under the alliance, all members are required to respond if one comes under attack.

“Number one, the 28 countries of NATO, many of them aren't paying their fair share,” Trump said. “We're defending them and they should at least be paying us what they're supposed to be paying by treaty and contract.”

He also said NATO members “do not focus on terror” and claimed the alliance had recently announced a new terrorism effort due to his comments.

Clinton said the United States is already working within NATO to focus on the spread of terrorism and benefited in 2001 from the pact’s requirements that the alliance respond to any attack on a member state.

“And you know the only time it's ever been invoked? After 9/11, when the 28 nations of NATO said that they would go to Afghanistan with us to fight terrorism, something that they still are doing by our side,” she said.

Positions on the Iraq WarDebate moderator Lester Holt of NBC News provided some of the real-time fact-checking — mostly of Trump — that caused a clash between the two campaigns over the weekend. The Clinton campaign argued the debate should include the checks because of Trump’s penchant for bending the truth, while the Trump campaign called the effort a conspiracy by liberal media.

In practice, Clinton avoided tough questions over her support of the invasion of Iraq in 2003, which she has called a mistake. But Holt pinned Trump down after he again made the discredited claim that he opposed the war prior to the invasion.

“I was against the war in Iraq,” Trump said and then claimed Fox News host Sean Hannity could verify his position because the two had private conversations before the war.

Even as the candidates sparred over hot-button topics, other key issues were left untouched in the first debate Monday. Two more debates as well as a vice presidential debate are scheduled in October.

Military leaders have warned Congress for the past two years that forces are overstressed and under-funded, but lawmakers have been unable to repeal or hash out a long-term solution for defense spending caps.

The caps, which are sometimes referred to as sequestration, were passed by Congress in 2011 and are set to keep downward pressure on military spending for the next five years – throughout the next president’s term. Both candidates have proposed doing away with the limits but neither has said how it can be accomplished.

Trump has said he would ask Congress to repeal the caps and then undertake a massive military buildup. During the summer, Clinton called the budget caps arbitrary and damaging, suggesting a wider agreement on federal spending should be found.

The candidates also did not talk and were not questioned about veteran issues or troubles at the Department of Veterans Affairs, which is still trying to recover from a nationwide scandal over health care delays in 2014.

Both candidates have released detailed but significantly different plans to fix the VA.

“Veterans issues are national security issues. Both candidates missed an incredible opportunity tonight to devote at least some portion of their time to focus on our nation's veterans,” Paul Rieckhoff, the founder and CEO of Iraq and Afghanistan Veterans of America, said in a released statement Monday following the debate.