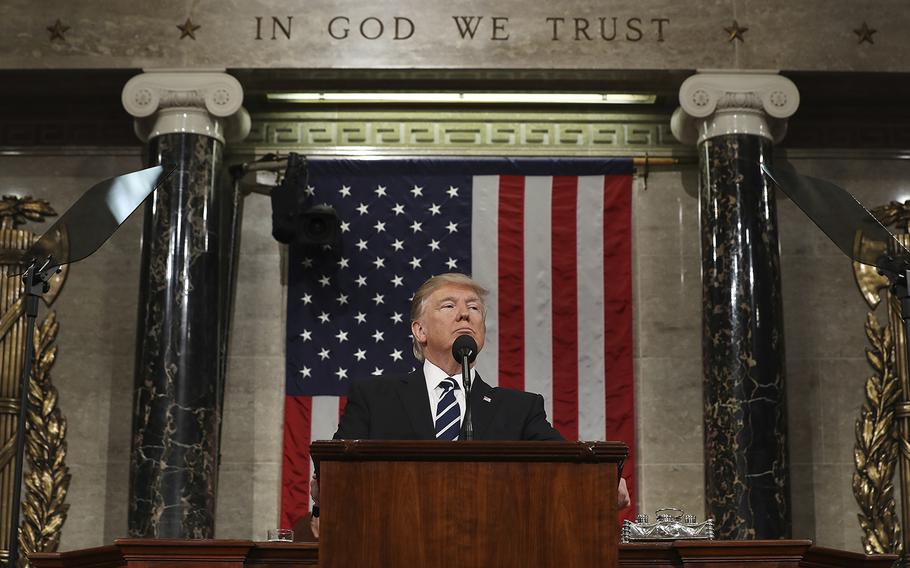 STUTTGART, Germany — President Donald Trump has reaffirmed his demand that NATO members increase their defense spending but also said his months of tough talk directed at allies was beginning to pay off.

The money is “pouring in,” he said in a speech to Congress late Tuesday.

Trump, reiterating that the U.S. would stand with NATO, said that “our partners must meet their financial obligations.”

“And now, based on our very strong and frank discussions, they are beginning to do just that,” he said.

Trump did not offer specifics on how NATO allies have pledged to raise spending, and so far there have been no major shifts in Europe defense spending agendas. But in recent weeks the U.S. has repeatedly emphasized that members must make significant progress this year in mapping out a way to achieve NATO’s own spending goals.

Allies in the Baltics have already indicated defense spending is set to increase. Germany has said it will gradual increase expenditures, though there is a divergence of views in Berlin about how much, how fast and how much of a priority military funding should be.

Trump’s frequent demands for more defense spending, which was made explicit by Defense Secretary Jim Mattis in Brussels last month, has raised the prospect of confrontation with the new administration if members fall short. Mattis warned NATO could “moderate” its support for NATO if allies failed to step up, a declaration that rattled many officials in Brussels.

In contrast, the tone toward NATO was decidely warmer in Trump’s speech to Congress on Tuesday. There was no talk of an alliance that had grown “obsolete,” as Trump has declared in the past. He laid out expectations but stayed away from ultimatums.

“We expect our partners, whether in NATO, in the Middle East, or the Pacific ... to take a direct and meaningful role in both strategic and military operations, and pay their fair share of the cost,” he said.

Trump’s “America first” agenda has caused fear in Europe that he could seek to undermine the European Union as well as NATO, favoring bilateral relations with member states. He indicated he favored the rights of “sovereign nations” over multilateral international institutions, even as he said he wouldn’t turn away from “historic institutions.”

“Free nations are the best vehicle for expressing the will of the people ... and America respects the right of all nations to chart their own path,” Trump said. “My job is not to represent the world. My job is to represent the United States of America.”