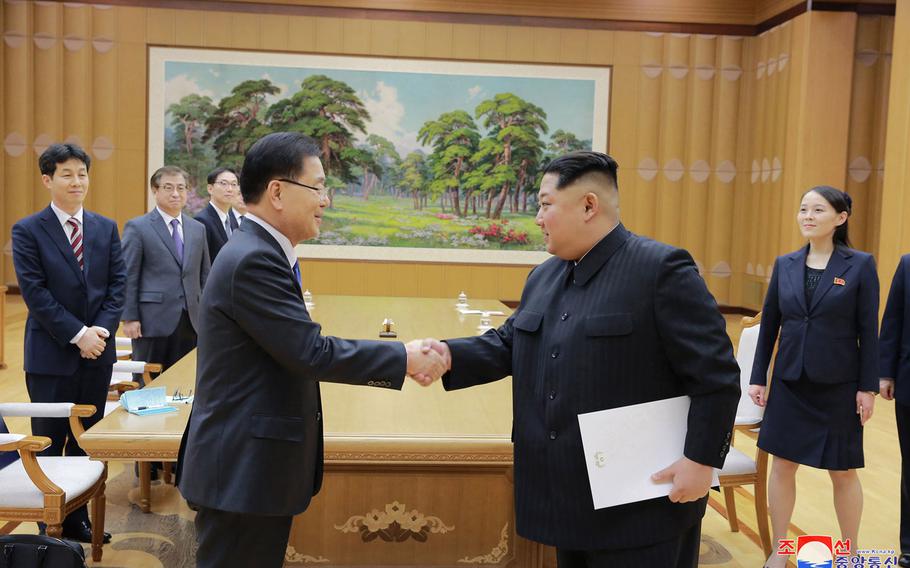 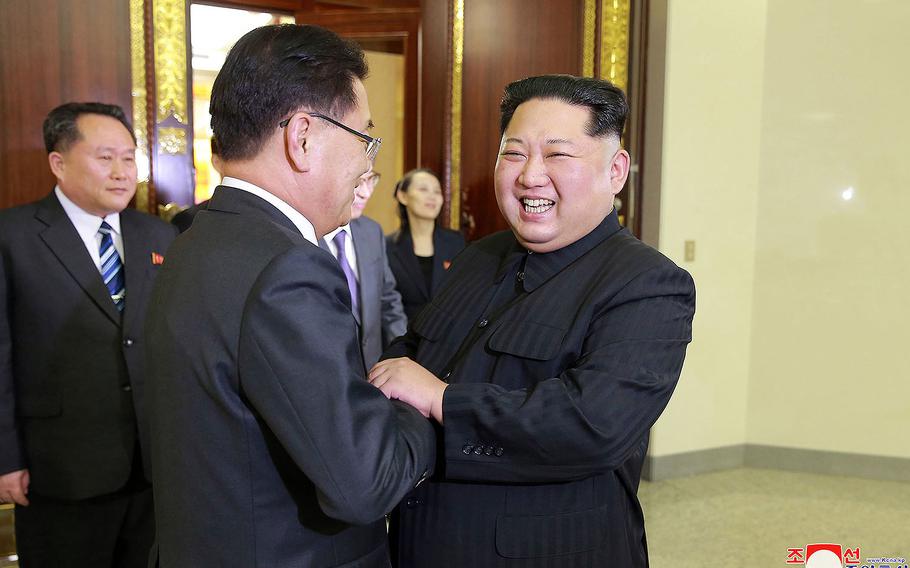 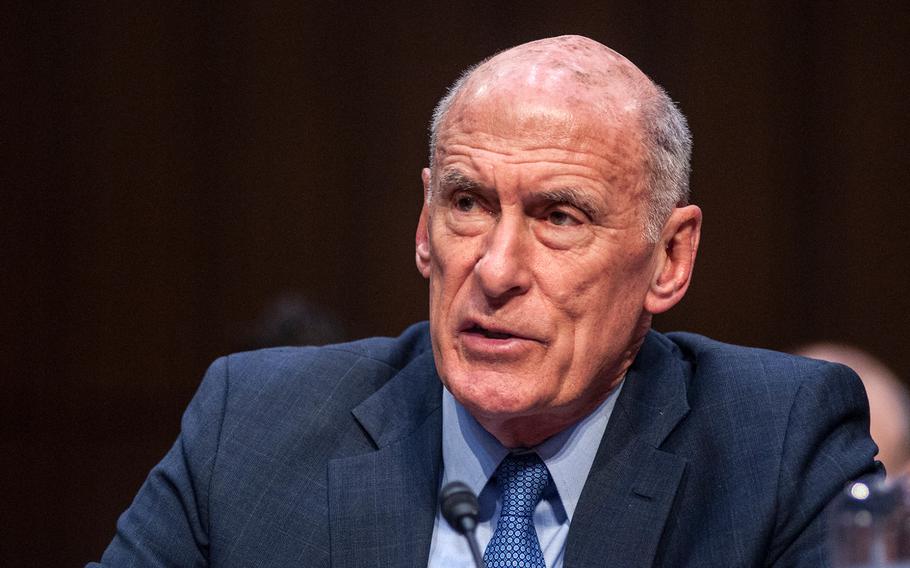 SEOUL, South Korea — In a stunning reversal, North Korea expressed a willingness to hold talks with the United States and to suspend nuclear and missile tests in the meantime, a South Korean official said Wednesday after a landmark meeting in Pyongyang.

The announcement raised hopes that a détente fostered by the recent Olympics in South Korea may blossom into broader talks over the growing threat from the North’s nuclear weapons program.

President Donald Trump was cautiously optimistic about what he called “possible progress being made in talks with North Korea.” He told White House reporters that North Korea "seems to be acting positively" after months of rising tension over its nuclear and missile programs.

“For the first time in many years, a serious effort is being made by all parties concerned,” he tweeted. “The World is watching and waiting! May be false hope, but the U.S. is ready to go hard in either direction!”

At the same time, Vice President Mike Pence said the U.S. would remain “firm in our resolve” whichever direction talks with North Korea go. “All options are on the table and our posture toward the regime will not change until we see credible, verifiable and concrete steps toward denuclearization,” Pence said in a statement.

The announcement followed a recent ebb in tensions after months of threats and saber rattling by Washington and North Korea that prompted fears of a new conflict on the divided peninsula.

At a minimum, South Korea’s national security director Chung Eui-yong said the North and South Korean leaders had agreed to meet in late April in a building on the South Korean side of the truce village of Panmunjom in the heavily fortified border area.

It would be only the third summit between the two Koreas, which remain technically at war after their 1950-53 conflict ended in an armistice instead of a peace treaty.

Chung made his remarks to reporters after returning from a two-day trip to Pyongyang that included dinner and a toast from Kim Jong Un.

The 10-member delegation comprised the first South Korean officials to meet the 34-year-old North Korean leader since he took power after his father’s death of a heart attack in 2011.

Perhaps most surprising was Chung’s claim that North Korea had expressed an openness to holding a “candid dialogue” with the United States over nuclear disarmament demands.

“The North side clearly affirmed its commitment to the denuclearization of the Korean Peninsula and said it would have no reason to possess nuclear weapons if the safety of its regime is guaranteed and military threats removed,” Chung said.

He added that North Korea had “made it clear that it won't resume strategic provocations like additional nuclear tests or test-launches of ballistic missiles,” during talks with the United States.

Trump has largely taken a hard line against the North including threats to take military action to stop its progress toward developing a nuclear weapon that could target the U.S. mainland.

But the president also has signaled a willingness to talk to Kim Jong Un while maintaining denuclearization was a condition for such dialogue.

But he said it’s hard to tell whether the recent breakthroughs are due to increased sanctions and diplomatic pressure against the North or part of Kim Jong Un’s plan to solidify his hold on power.

Potential hurdles include the need for Washington to be clear about whether it’s demanding denuclearization before talks or whether it would accept a testing freeze.

Critics also point out that the North has agreed to denuclearization talks in the past as a way to wring concessions from the West and is likely trying to ease punishing economic sanctions.

Intelligence and military officials told a Senate panel on Tuesday that only time will tell if Kim Jong Un is ready to scale down his nuclear weapons program.

“Maybe this is a breakthrough,” Dan Coats, director of National Intelligence, said during a Senate Armed Services Committee hearing on worldwide threats. “I highly doubt it. Hope springs internal.”

Both Coats and Lt. Gen. Robert Ashley Jr., director of the Defense Intelligence Agency, testified to that skepticism before Tuesday’s hearing, highlighting North Korea as one of the most immediate threats facing the U.S.

“North Korea is a continuing threat to the United States and our allies in northeast Asia,” Ashley said. “Kim Jong Un has pressed his nation down a path to develop nuclear weapons and deliver them with ballistic missiles that can reach South Korea, Japan, Guam and the United States. He has instituted a rapid missile defense and flight testing program that has over last two years brought North Korea closer to its goals.”

Sen. James Inhofe, R-Okla., who recently returned from a congressional delegation trip to the Korean peninsula, expressed optimism related to the plan.

Inhofe, who is sitting in as chairman of the Senate Armed Services Committee, said a previous breakthrough for the 2018 Winter Olympics could bode well for a new deal.

While some say “there’s no reason to believe that Kim Jong Un is going to be a changed person,” said Inhofe, who is sitting chair in lieu of Sen. John McCain, R-Ariz., who is battling brain cancer. But I’m optimistic with “the news last night that he’s actually made a response… and he is ready to negotiate and stop his nuclear testing.”

“Senator, right now I don’t share your optimism,” he said. “That is kind of a ‘show me.’ We will see how this plays out.”

The United States and South Korea are due to hold joint war games in coming weeks after agreeing to suspend them during the Olympics and the upcoming Paralympics, which end on March 18.

North Korea hates the military exercises, which it considers a rehearsal for an invasion, and it’s unclear how their resumption may affect the current efforts to promote peace.

Alexandra Bell of the Center for Arms Control and Non-Proliferation, said there’s a precedent for canceling the exercises or reducing the scale of the drills.

“Based on previous North Korean statements and actions, it is difficult to believe they are ready to give up their nuclear weapons program now,” she said in an email.

“In the early stages, formal talks should focus on further reducing tensions and coming to smaller-scale agreements, such as a ‘freeze for freeze’ where both sides agree not to hold military exercises or test missiles/nuclear weapons,” she added.

The most recent summit was in 2007 when then South Korean President Roh Moo-hyun traveled to Pyongyang to meet with Kim Jong Il, the current leader’s father.

Stars and Stripes writer Claudia Grisales contributed to this story.