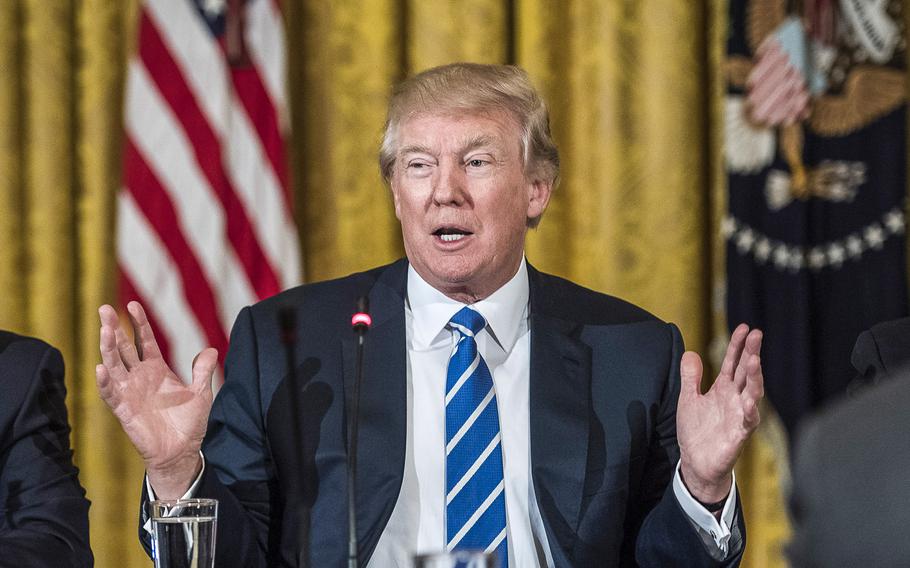 WASHINGTON — President Donald Trump said Friday that his administration will pursue one of the most aggressive sanction efforts against North Korea yet, with plans to disrupt the country’s shipping companies and vessels to force Kim Jong Un’s regime to rein in its nuclear weapons program.

The sanctions come after a year of tough rhetoric between the United States and North Korea over the regime’s development of nuclear weapons, even as North Korea and South Korea have appeared to improve relations in the midst of the 2018 Winter Olympic Games.

"We have imposed the heaviest sanctions ever," Trump said at the end of an extended and meandering speech at the Conservative Political Action Conference held in Oxon Hill, Md. "Hopefully something positive can happen."

The effort marks the largest package of sanctions issued yet against North Korea, White House officials said. The sanctions will further isolate the country as they aim to halt the Kim regime's ability to conduct illicit maritime activities that facilitate coal and fuel transports, among others, a senior White House official said Friday ahead of Trump's announcement.

In all, the United States is sanctioning 27 shipping and trade companies, 28 vessels and one individual, totaling 56 designations that are located or registered in countries all over the world, the official said. The list of countries are North Korea, China, Singapore, Taiwan, Hong Kong, Marshall Islands, Tanzania, Panama and Comoros.

In essence, the sanctions blacklist the companies and vessels to hurt them financially by prohibiting the United States or its representatives from conducting business with them.

"We are putting companies and countries across the world on notice that this administration views compliance with U.S. and U.N. sanctions as a national security imperative," Treasury Secretary Steven Mnuchin said during a news conference following the Trump announcement. "Those who trade with North Korea do so at their own peril."

The sanctions come at a tricky time. Trump's daughter and senior advisory, Ivanka Trump, is now leading a U.S. contingent to the closing ceremonies of the Olympics in South Korea on Sunday. North Korea, which has participated jointly with South Korea in the Olympic events, has shown interest in negotiations and conducted no new weapons testing in recent weeks.

"While we appreciate the fact that there haven't been tests, that's not exactly a terrific standard," Mnuchin said. "There's a huge process that goes into preparing these sanction packages, as soon as they were ready, we were ready to release them today."

Mnuchin also said Ivanka Trump had been informed about the sanctions ahead of her arrival in South Korea and later had a private dinner with the country's President Moon Jae-in to discuss the effort.

With Friday's announcement, the United States now has more than 450 sanctions in effect against North Korea, with half of them imposed in the last year, Mnuchin said.

"Today's actions will significantly hinder North Korea's ability to conduct evasive maritime acts that facilitate illicit coal and fuel transports and limit the regime's ability to ship goods through international waters," Mnuchin said. "Our actions are part of the ongoing maximum economic pressure campaign to cut off sources of revenue that this regime derives from U.N. and U.S. prohibitive trade to fund its nuclear and ballistic missile programs."

The move comes on the heels of reports in recent months that China and other countries have circumvented sanctions restricting imports of refined petroleum products to North Korea by making the transfers at sea. A U.N. Security Council resolution in September severely restricted the regime's imports of the products.

Though Russia has traded with North Korea, it wasn't mentioned Friday as a country of origination for any of the sanctioned companies or vessels. However, Mnuchin didn't rule that out.

"Obviously Russia and China are two countries who have traded with" North Korea, he said. "We're prepared to blacklist Russian ships to the extent there are Russian ships."

At least one key senator lauded the effort on Friday.

Sen. Jim Inhofe, R-Okla., who has been acting chairman of the Senate Armed Services Committee in recent weeks and is visiting the Korean Peninsula this week, said the timing was right for the aggressive sanctions.

Inhofe, who is traveling in the region with a contingent of congressional members, met Friday with U.S. military personnel and their Korean counterparts in the demilitarized zone between North and South Korea.

“After discussions with the (Republic of Korea) defense and foreign ministers, it is clear to see North Korea’s commitment to their nuclear program and their continued aggression through the execution of ballistic missile tests," Inhofe said in a statement. "Diplomatic and economic pressure is having an effect on the regime in Pyongyang. Today’s sanctions, the strongest yet, will continue to show our steadfast commitment to our allies in South Korea and the denuclearization of North Korea.”

But there are no guarantees Friday's announced sanctions will prevent future efforts by North Korea to circumvent the restrictions.

In light of this concern, the United States will send out a shipping advisory highlighting the warning signs that other nations need to watch for, a senior White House official.

"Those who engage in this kind of activity are going to be subject not only to our designations but in certain circumstances our enforcement actions," the official said.