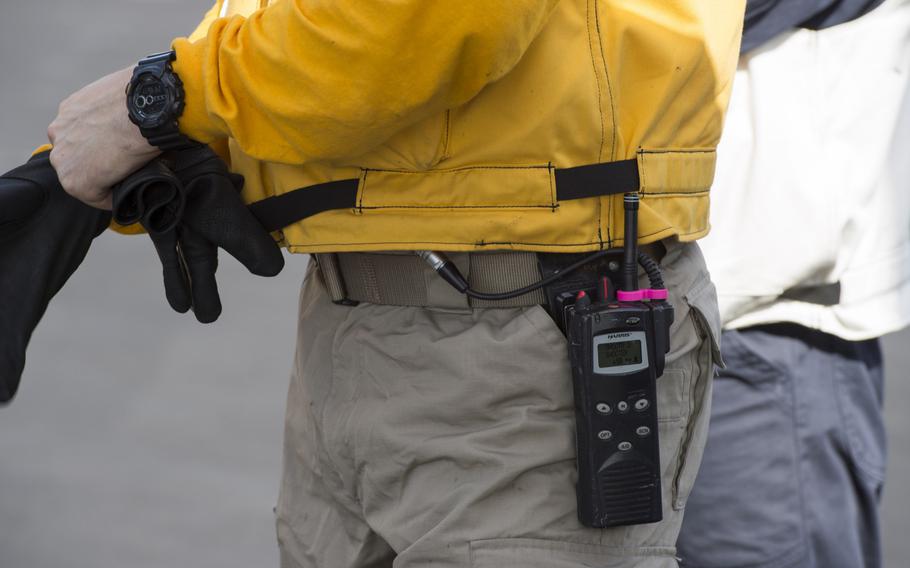 Buy Photo
A member of the flight deck crew for the aircraft carrier USS Harry S. Truman has a pink ''Tru Clip'' on his handheld radio to ensure the clasp attachment doesn't crack or break. (Chris Church/Stars and Stripes)

Buy Photo
A member of the flight deck crew for the aircraft carrier USS Harry S. Truman has a pink ''Tru Clip'' on his handheld radio to ensure the clasp attachment doesn't crack or break. (Chris Church/Stars and Stripes) Buy Photo
''Tru Clips'' sit on the workbench of the 3D printing lab onboard the aircraft carrier USS Harry S. Truman, along with the clasp attachment for the handheld radio attachment the ''Tru Clips" are designed to protect. (Chris Church/Stars and Stripes) 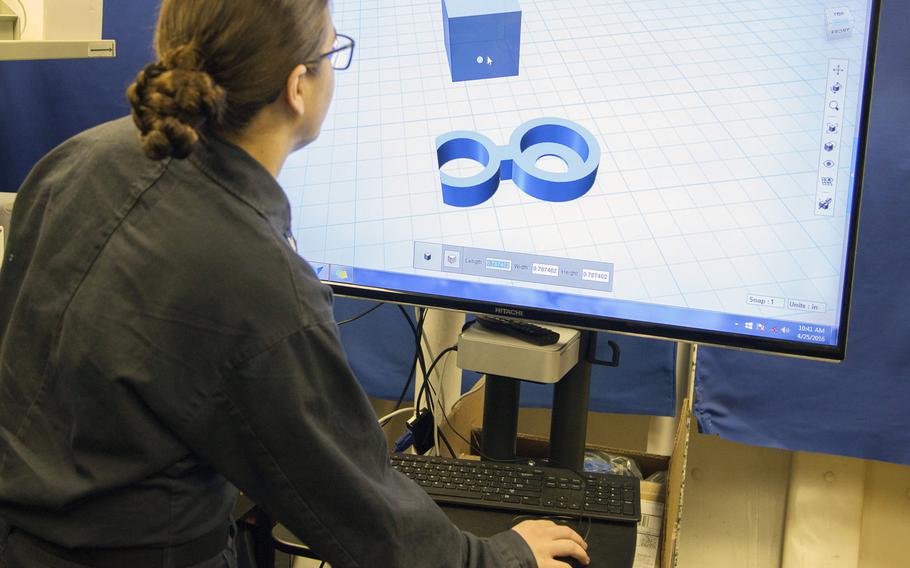 Buy Photo
Petty Officer 2nd Class Ashley Figert, a 3D print technician aboard the aircraft carrier USS Harry S. Truman, shows how to create products with the computer-aided design program. The ''Tru Clip'' design being shown here is being shared with the International Space Station, where it will be used by astronauts. (Chris Church/Stars and Stripes) 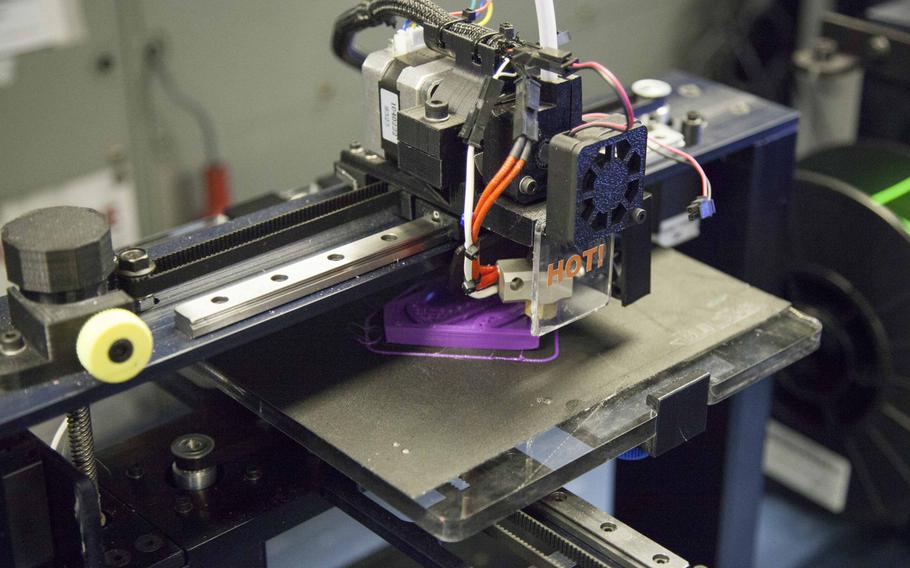 ABOARD THE USS HARRY S. TRUMAN — Sailors in the USS Harry S. Truman’s 3D printing lab have invented a device that’s already saving the Navy thousands of dollars and will soon have out-of-this-world implications.

The idea for the Tru Clip, a tiny figure-8-shaped plastic piece, was born of necessity.

The ship’s combat systems department asked the 3D printing lab if it could find a way to alleviate a common shipboard problem – a clasp on the handheld radios used across the ship kept breaking, according to Lt. j.g. Casey Staidl, 3D printing lab division officer.

To address the problem, the 3D printing shop, where Staidl and three other sailors work, bounced ideas back and forth until they came up with the design that is not only functional but cheap.

Each Tru Clip costs about 6 cents, a far cry from the $615 it costs the Navy to replace a single clasp, Staidl said.

In the past three months, the ship has already saved about $12,000.

“It doesn’t look pretty, it’s not a real sexy innovation, but that alone has saved us a ton of money,” Staidl said. “In the past 2 ½ years, Truman has spent $146,000 just on these pigtail attachments alone.”

But since creating the Tru Clip, the Truman has ordered just two of the expensive clasps, he said, essentially for backlog supply purposes.

The Navy will likely continue to save even more money as the Tru Clip design is integrated into the fleet, Staidl said.

And the ship is sending the digital file of the design to the International Space Station, where astronauts will use it to print out the clip using their onboard 3D Printer.

The space station is hoping to print its first Tru Clip about June 17, to coincide with the White House sponsored National Week of Making, which honors inventors and innovators.

The Truman is the first of the Navy’s 10 aircraft carriers to be outfitted with a 3D printer. The Navy has also used 3D printers onboard the amphibious assault ships USS Essex and USS Kearsarge.

The pilot program aims to determine how practical the printer can be for the fleet, said Chief Petty Officer Jerrod Jenkins, the chief in charge of the 3D printing lab.

So far, the printer has proved useful for a variety of applications. It has been used to create quick fixes for hoses used by the shipboard anesthesiologist, as well as for switch covers that prevent people from bumping into important switches, such as the ones in the ship’s bridge that control lighting on the flight deck.

The Truman’s 3D printing shop is hoping that as the Navy sees the advantages to the technology, 3D printing programs will continue to take off.

Jenkins hopes someday 3D printers will allow the Navy to find better use for the huge storerooms that now house spare parts.

“When you come out to an aircraft carrier, you don’t think of a 3D printer sitting here making differences,” Jenkins said.

“You think of more of the traditional bombs and pilots, but you really have to give the support people their due when it comes to coming up with new and innovative ways to support ultimately the big mission.”