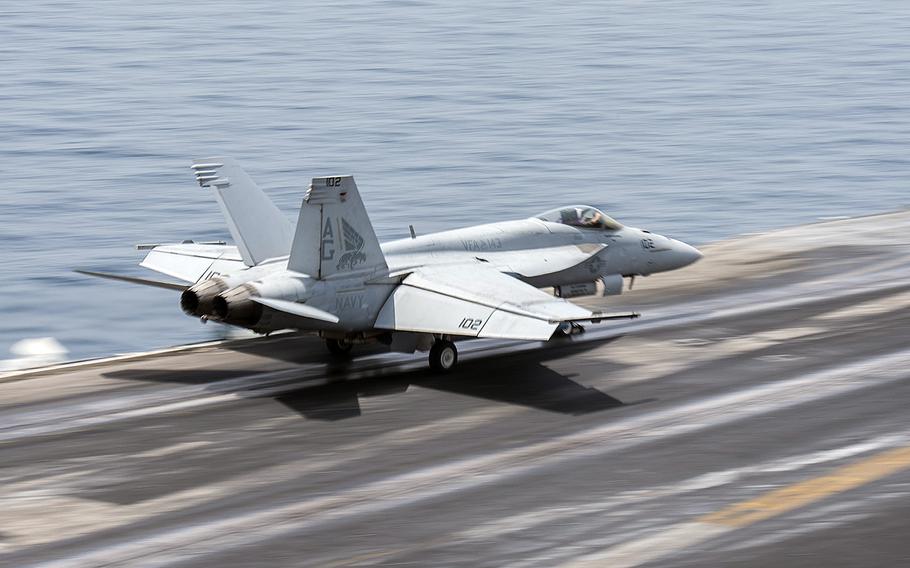 An F/A-18E Super Hornet launches from the flight deck of the aircraft carrier USS Harry S. Truman on April 24, 2016. Airstrikes against Islamic State militants were launched Friday, June 3, 2016, from the Truman while it was operating in the Eastern Mediterranean, according to the European Command. (Bobby J Siens/U.S. Navy)

An F/A-18E Super Hornet launches from the flight deck of the aircraft carrier USS Harry S. Truman on April 24, 2016. Airstrikes against Islamic State militants were launched Friday, June 3, 2016, from the Truman while it was operating in the Eastern Mediterranean, according to the European Command. (Bobby J Siens/U.S. Navy) 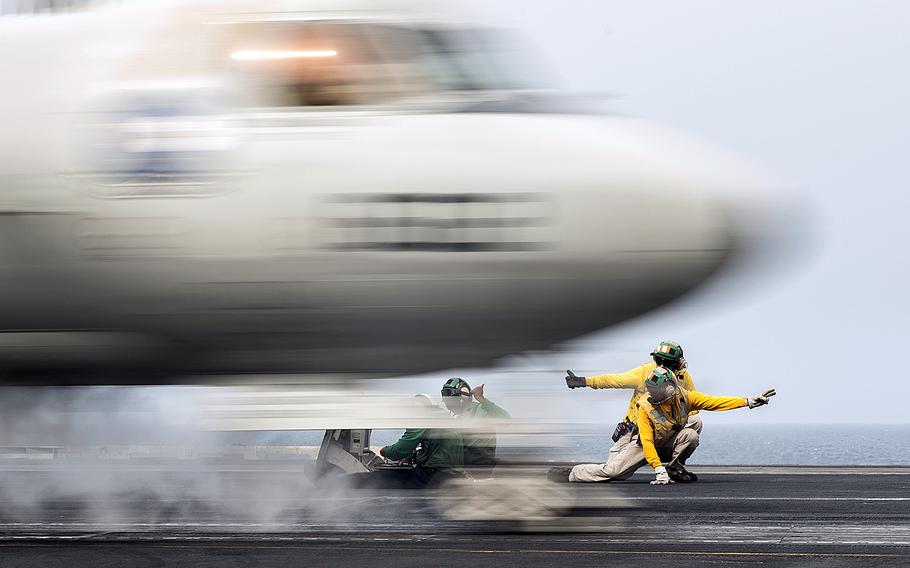 Sailors signal the launch of an E-2C Hawkeye from the flight deck of the aircraft carrier USS Harry S. Truman on April 13, 2016. Airstrikes against Islamic State militants were launched Friday, June 3, 2016, from the Truman while it was operating in the Eastern Mediterranean, according to the European Command. (Ethan T. Miller/U.S. Navy )

ABOARD THE USS HARRY S. TRUMAN — The USS Harry S. Truman launched airstrikes against Islamic State targets from the Eastern Mediterranean on Friday, a first in the nearly two-year long campaign against the group.

The strike group’s deployment, which just finished a tour through Central Command’s area of operation, has been extended as the warships take part in combat operations from the Mediterranean, U.S. European Command said.

“While the Harry S. Truman Carrier Strike Group is in the 6th Fleet area of operations, they continue to project power ashore against terrorists and violent extremists,” Vice Adm. James Foggo III, commander of U.S. 6th Fleet, said in a statement. “This exemplifies our Navy’s mobility, flexibility and adaptability, as well as our commitment to execute a full range of military operations in concert with our indispensable European allies and partners.”

Friday’s strikes mark the first time a carrier group has conducted combat operations from the Mediterranean since 2003 when the Truman deployed in support of Operation Iraqi Freedom.

Beyond opening a new direction of attack against the militant group, which controls a swath of territory between Syria and Iraq, the strikes from the Truman may be seen as an answer to Russia’s growing military presence and influence in the region, which has concerned U.S. policymakers.

It also sends a message to Turkey — whose government has complained about U.S. support for Kurdish militias fighting the Islamic State — that the U.S. is not dependent exclusively on the Turkish air base at Incirlick to prosecute the air war over Syria.

In the past, U.S. and allied pilots launched airstrikes only from carriers in the Persian Gulf or nearby land bases in countries like Bahrain, Turkey and the United Arab Emirates, with the Mediterranean serving as little more than a transit route for East Coast-based carriers.

The five-ship Truman strike group is returning from an eight-month deployment to the Persian Gulf, where its Carrier Air Wing 7 dropped the most ordnance of any carrier yet in the operation against the Islamic State group. The Pentagon extended the deployment one month to reduce a gap with its replacement, the carrier USS Dwight D. Eisenhower.

The Truman began the airstrikes after entering the Mediterranean from the Red Sea. The strike group transited the Suez Canal on Thursday, EUCOM said.

The U.S. had considered conducting airstrikes from the Mediterranean when the Truman was deploying to the Middle East in December, after the November terrorist attack in Paris spurred France to deploy its own carrier, the Charles de Gaulle. The two carriers instead continued to the Middle East for combined operations.

Russia has used an airbase near the Syrian coastal city of Latakia to hit insurgent positions, including rebel groups supported by the U.S.-led coalition. Russia has deployed a sophisticated mobile air-defense battery, the S-400 to Latakia, and it has built up its presence at its naval base in the Syrian port city of Tartus.

The U.S. views those moves, along with recent deployments to the Mediterranean and Black Sea, as an effort by Russia to carve out a bubble of influence in the region. Their concern is that Russian weapons, by raising the risks to allied ships in the area, may dissuade countries from deploying nearby.

Russia stationed two of its newest Kilo-class diesel submarines to the Black Sea last year, a move seen as extending its reach in the Mediterranean. One of the two subs fired cruise missiles at land targets in Syria in December. The subs are also equipped with anti-ship variants of the same missile, the Kalibr, that could threaten carriers, Navy officials say.

Washington’s public position is that it doesn’t actually coordinate aerial operations in Syria with Moscow. But Susan Rice, President Barack Obama’s national security adviser, has said that the U.S. now talks frequently with Russia to avoid possible incidents. And Syria’s government — Russia’s ally — has tacitly allowed the U.S. and its allies to conduct airstrikes against Islamic State and other terrorist groups.

Stars and Stripes reporters Slobodan Lekic and John Vandiver contributed to this report.