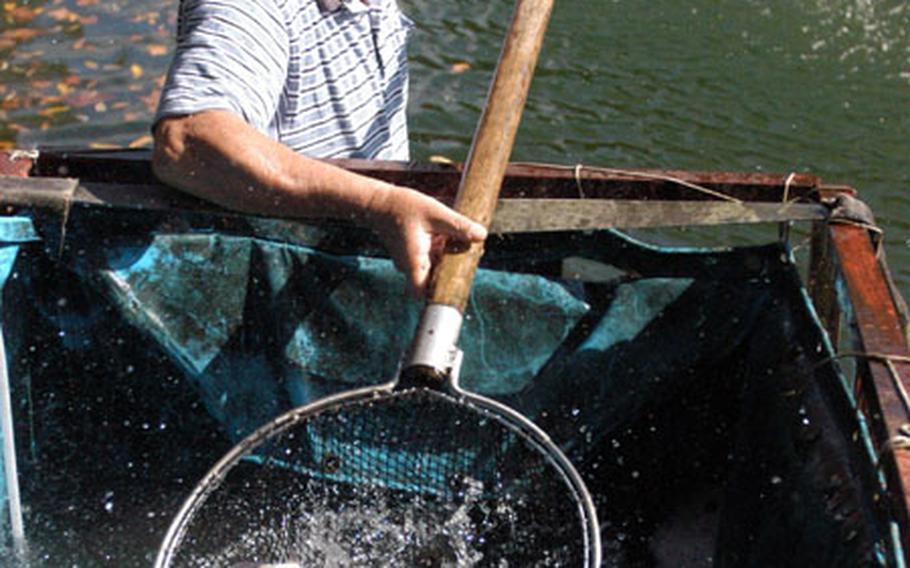 Hiroshi Sato of Nanasawa Trout Union scoops a net full of brown and rainbow trout out of the back of his truck for stocking in to Dewey Pond Thursday. More than 300 fish were released in to Dewey Park&#39;s pond as part of the Outdoor Recreation sport fishing program at Camp Zama. (Jim O'Donnell / S&S)

The release is part of the Outdoor Recreation program to provide sport fishing for its customers at Zama and the surrounding Kanto Plain bases according to Takeo Ryuzaki, Stock Control clerk with Zama&#8217;s Outdoor Recreation.

&#8220;We stock the pond usually about once a month during the fishing season here,&#8221; said Ryuzaki. Zama&#8217;s fishing season runs October through June.

Ryuzaki says the license limit usually is four fish, but during the derby, it&#8217;s relaxed.

Zama&#8217;s Outdoor Recreation is holding the 2003 Season Opening Trout Fishing Derby on Saturday from 1 to 3:30 p.m. at Dewey Park Pond.

Prizes will be awarded in nine different categories, Ryuzaki said.

Ryuzaki said for servicemembers and their families, &#8220;trout fishing here is a good way to spend a weekend. Please come and enjoy it with your kids.&#8221;