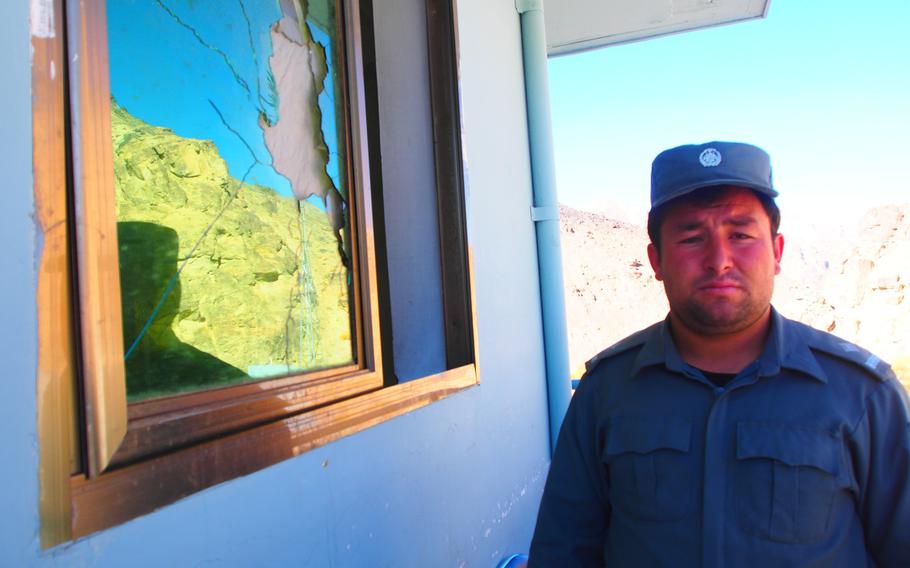 Buy Photo
Mirza Hussein, the deputy police chief for Shibar district, a volatile region in Bamyan province, Afghanistan, stands next to a window of his police station smashed by a rocket-propelled grenade. Violence has been rising in parts of the normally quiet province since international troops pulled out in April. (Heath Druzin/Stars and Stripes)

Buy Photo
Mirza Hussein, the deputy police chief for Shibar district, a volatile region in Bamyan province, Afghanistan, stands next to a window of his police station smashed by a rocket-propelled grenade. Violence has been rising in parts of the normally quiet province since international troops pulled out in April. (Heath Druzin/Stars and Stripes) Buy Photo
The town of Shumbul, Afghanistan, in Bamiyan province's Shikari valley, where insurgent attacks have been rising since international troops left the province in April. Bamiyan officials say they need more help and went so far as to request an international military base be built in the province at a recent national council of leaders, known as the Loya Jirga. (Heath Druzin/Stars and Stripes) Buy Photo
An Afghan National Police officer walks toward two motorists who failed to stop when he waved them down near the turn-off to Saighan district, a restive region of Bamiyan province, Afghanistan, where insurgent attacks are on the rise since international troops left in April. (Heath Druzin/Stars and Stripes) 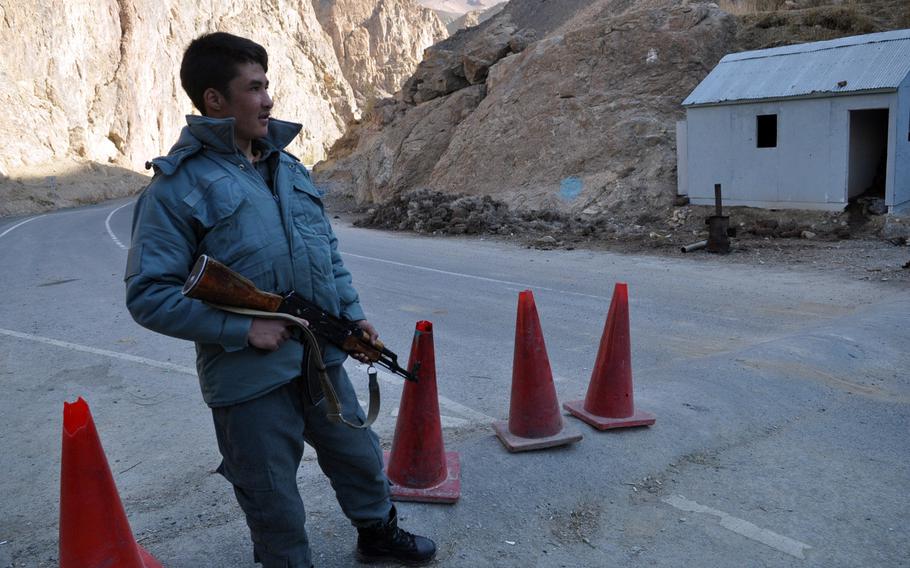 Buy Photo
An Afghan National Police officer stands guard near the turn-off to Saighan district, a restive region of Bamyan province, Afghanistan, where insurgent attacks are on the uptick since international troops left in April. (Heath Druzin/Stars and Stripes)

SHIBAR DISTRICT, Afghanistan — Less than an hour’s drive from the sleepy city of Bamiyan, with its giant Buddhas, nascent tourism industry, and zero foreign troops, this rugged mountain district in what many consider the safest province in the country has quietly become a tense battleground between government forces and insurgents. It may provide a peek at what Afghanistan faces in a post-NATO world.

The large kiwi statue representing New Zealand soldiers who were stationed in Bamiyan city until April is long since gone from the entrance to the province’s main military base, replaced by Afghan flags and stern-faced Afghan guards.

However, seven months after the last foreign troops left Bamiyan province, the change is more than cosmetic: Just 1,200 national police are tasked with maintaining peace in the province, and security officials say they are struggling to stave off increased attacks from an emboldened local insurgency. Still, they have managed to keep militants from establishing positions in the valley, despite their limited resources.

In some ways, Bamiyan is both an experiment and a possible barometer for the near future of Afghanistan, where all foreign combat troops are scheduled to leave by the end of 2014. Long considered one of the safest provinces in the country, it was one of the first vacated by international troops. Since the New Zealand contingent departed, national police have held insurgents at bay, though they have taken a distinctly defensive posture. Their ultimate goal seems to be to uphold the stalemate, a change from the NATO-led International Security Assistant Force’s earlier bold aims of quashing the insurgency entirely.

It’s a dilemma that’s common in much of the country, where the Afghan National Security Forces (ANSF) are still struggling with coordination and find themselves in a defensive posture, Hilaluddin Hilal, a military analyst and former Afghan army general said. Hilal said that the Afghan army and police must also develop a viable Air Force and improve intelligence-gathering and artillery capabilities before they will be able to conduct major offensive operations against insurgents.

“Right now, the ANSF are not in a position to fully go after the enemy,” he said.

Despite limited resources, Bamiyan is doing better than some other parts of the country, where insurgents have made gains. In neighboring Parwan province, the Taliban have held sway over an entire district, and the Afghan Independent Election Commission said one third of the country may be so dangerous that some polling stations will not be able to open for the presidential elections in April.

What Bamiyan has missed most since international troops left the province is heavy weaponry and readily available air support, said Mohammad Ali Lagzi, the longtime chief of security for the province, who is now acting provincial police chief.

“When they went with us on patrols, they had better equipment,” he said. “Now, we don’t have it; when we face the enemy, we have a PK-1 [machine gun] and they have a PK-1. We don’t have the advantage anymore.”

In much of Bamiyan, that stalemate means relative peace, except in the Shikari Valley, the three-district area north of Bamiyan city, bordering restive Baghlan province.

Although Bamiyan faces some of the same challenges as other areas of Afghanistan, its population and location make it unique in ways that may work to its advantage. Bamiyan is a stronghold of the Hazara minority, a group set apart by ethnicity — their Asiatic features denoting their Mongolian heritage — and religion, since the Hazara are Shiite Muslims while most Afghans are Sunni Muslims. They were heavily persecuted by the Taliban and partly due to that history have been particularly reliable allies of the Afghan government and the international military coalition in the country.

One of the poorest provinces in the country, Bamiyan also is trying to build a tourism industry around its historic sites, including the giant Buddhas blown up by the Taliban in 2001, and the mountainous province’s natural beauty, which includes Afghanistan’s only national park, Band-i Amir.

With its high mountain topography, the province produces very little and its mineral deposits are still years away from profitable mining. So, with tourism seen as one of the province’s few viable economic lifelines, Bamiyan officials are particularly concerned about security problems scaring away visitors.

Delegates of the Loya Jirga, a council of Afghan leaders convened in Kabul in November by President Hamid Karzai to consider a proposed security agreement with the United States, even called for international forces to re-establish a military base in Bamiyan due to the deteriorating security situation.

“It’s a need for the future of Bamiyan because we have threats from neighboring provinces,” said Ishaq Poya, a Bamiyan province tribal leader who was a delegate at the Loya Jirga.

In Shibar district, one of the three in the restive Shikari Valley and a short drive through a dramatic slot canyon from Bamiyan city, police are on the defensive.

Mirza Hussein, Shibar district’s deputy police chief, shakes his head while pointing at a wrecked Humvee, one of just seven vehicles his 34 officers have to patrol the entirety of the rough dirt roads that criss-cross the craggy heights of the district. He’s been waiting five months for mechanics to come fix the truck, which was damaged by a roadside bomb.

Making his job more difficult, many insurgents slip into Bamiyan from neighboring Baghlan province, where the Taliban have a stronger presence, attack and then slip back. Officials say they have asked for more troops from the central government, but have yet to receive reinforcements.

“It’s hard for us to manage security with this few people,” Hussein said. “With this number of police personnel, we are able to give the enemy a strong answer, but we are not able to go after them. We can only maintain the situation.”

The security deterioration has knock-on effects beyond the occasional roadside bomb or rocket attack on police checkpoints. Schools are still open in the valley, but they can’t attract qualified teachers, and education officials have a tough time inspecting some schools, Shibar district Education Director Hussein Ali Muzafari said.

“When we want to go see the schools, we have to go with security and have to come back the same day,” he said.

With the U.S. and NATO threatening not to retain a small force of trainers and advisers in Afghanistan after combat troops leave next year if Karzai does not sign a bilateral security agreement with the U.S., many in the Shikari Valley are wary about the future.

Ghulam Sakhi Askari, a tribal leader in the valley, said the province needs more, not less international military support if it is to make security gains.

“The Afghan government and military are like a child that has just started walking,” he said. “If NATO stops helping them, I guarantee you the situation, not just in Bamiyan, but throughout the country, will get worse.”

Zubair Babkarkhail contributed to this report.