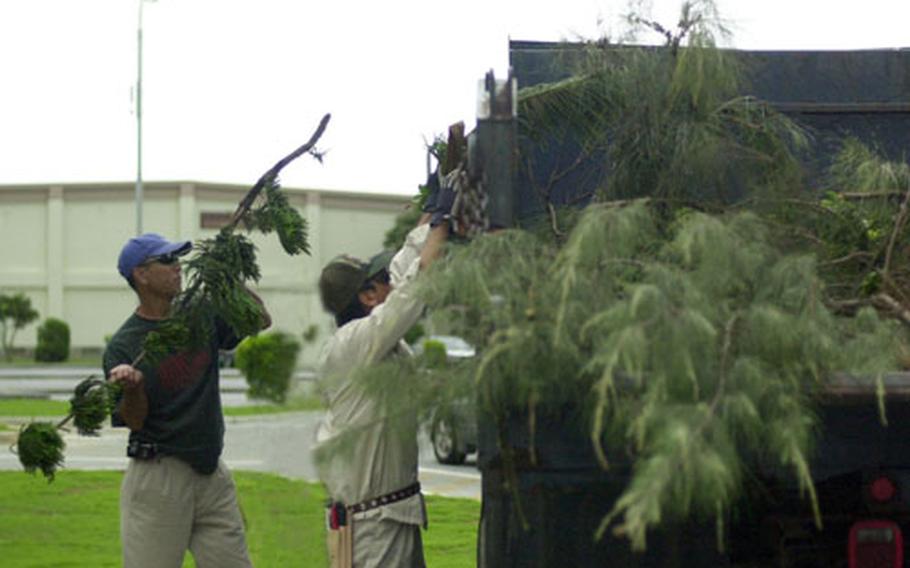 KADENA AIR BASE, Okinawa &#8212; Tropical Storm Megi sneaked up on Okinawa on Tuesday with higher winds than originally forecast, stripping some tree branches and whisking away light lawn furniture and other items base residents neglected to tie down.

Military bases quickly went into heightened conditions of readiness Tuesday after the storm developed more quickly than forecast. Early Tuesday, Megi, named for the Korean word for catfish, was expected to deliver modest winds to the island. But by 6 p.m. bases were locked down in Tropical Cyclone Condition of Readiness 1-Emergency, with winds whipping up to 55 mph.

Air Force Tech. Sgt. Michael Milton, a forecaster with Kadena&#8217;s 18th Weather Flight, said Wednesday that Tuesday&#8217;s strongest winds were clocked at 67.8 mph at 7 p.m., when the storm made its closest approach to the island, about 80 miles to the west.

The island returned to TCCOR-4 at 8:50 a.m. Wednesday, the normal condition for typhoon season on Okinawa. Megi, still classified a tropical storm, was about 287 miles northwest of the island, moving on a track toward the Korean peninsula at 18.5 mph.

Milton said the storm was forecast to reach typhoon status, with 75 mph winds at its center, at 3 p.m. Wednesday. By 5 a.m. Thursday, Typhoon Megi is forecast to pass within 10 miles of Pusan, South Korea, with winds gusting to 97 mph.

No major damage was reported on Okinawa. Rainfall measured from 0.74 inches in the south to 1.6 inches in the north, according to the Okinawa Meteorological Observatory.

Some base residents were caught off guard by the storm&#8217;s suddenness.

The winds picked up suddenly in the afternoon; that&#8217;s when Riddle noticed her trampoline being lifted several inches off the ground. She rushed outdoors; with a neighbor&#8217;s help, she was able to flip the trampoline to keep it from tumbling over.

Another neighbor wasn&#8217;t; their trampoline later was discovered in a small field some 50 feet downhill.

Nikki Herrington, a Kadena Air Base resident, said that the last storm being weaker than forecast may have led island residents to forgo extensive preparations for Megi.

&#8220;I took this storm for granted and I think the strength of the storm surprised a bunch of people who live in base housing,&#8221; she said. &#8220;For instance, after this storm I noticed many people didn&#8217;t turn their trampolines over, take lawn furniture inside and some, like me, left plants outside.

Amy Costa, who lives in Camp Lester housing and has been on island since late July, said her family had little to lose in the storm: its household goods shipment didn&#8217;t arrive until Wednesday morning.

She said she didn&#8217;t know what to expect from the storm but kept an eye on the American Forces Network and local television for updates and changes.