Troops with malaria could face punishment for disobeying orders Buy Photo
Service members in Haiti sleep under mosquito netting that helps protect them from malaria carried by the insects. (Photos by Seth Robson/Stars and Stripes)

Buy Photo
Service members in Haiti sleep under mosquito netting that helps protect them from malaria carried by the insects. (Photos by Seth Robson/Stars and Stripes) 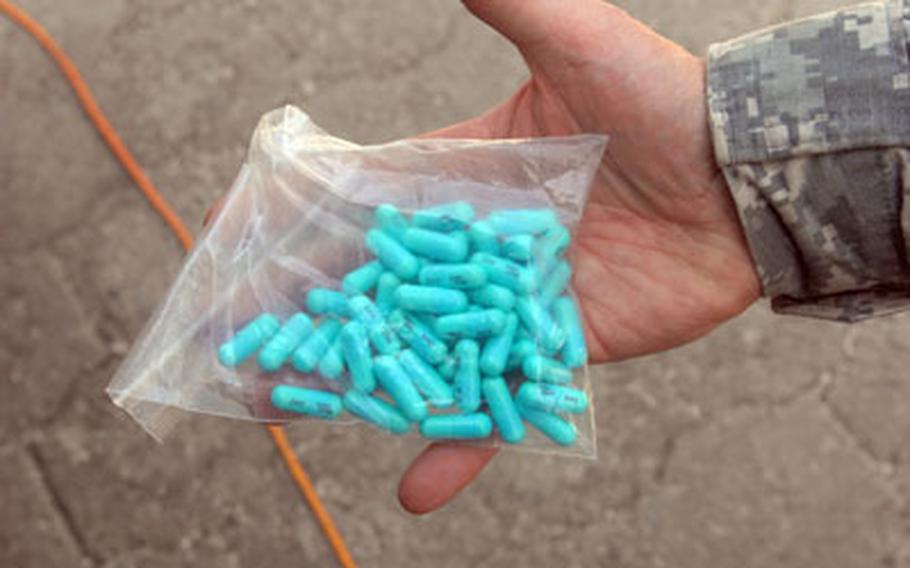 Servicemembers in Haiti must take anti-malria pills daily to ward off the deadly disease.. ()

CARREFOUR, Haiti &#8212; Servicemembers who contracted malaria in Haiti could be punished for failing to follow the prevention protocol, according to the Joint Task Force overseeing earthquake relief operations here.

The Marines working in Carrefour, a medium-sized city just up the coast from Port-au-Prince, are under constant attack by mosquitoes, which transmit malaria through their bites. To protect themselves, the Marines are told to use repellent, sleep under mosquito nets and take doxycycline anti-malaria pills daily. That should be an effective preventive approach, but &#8220;nothing is 100 percent effective,&#8221; said Dr. Larry Slutsker, chief of the malaria branch at the Center for Disease Control and Prevention.

&#8220;Just as with the measles vaccine or any kind of protection, nothing is perfect,&#8221; Slutsker said.

Medics assigned to the 82nd Airborne Brigade said last month that missing more than one dose of the daily medication could leave a person vulnerable to malaria.

Marines in Carrefour said they&#8217;ve been told they could face nonjudicial punishment, for disobeying an order to take their daily anti-malaria pills, if they contract the disease.

Cargile said the decision to punish a servicemember in such circumstances would be up to individual unit commanders based on the circumstances of each case.

&#8220;The 22nd MEU has always and will continue to take malaria prevention seriously, and our application of preventive medicine will remain very proactive,&#8221; he said.

&#8220;We are confident these isolated cases will have a positive outcome as the form of malaria in this part of the world can be eliminated from the bloodstream when diagnosed early,&#8221; he said, adding that both infected Marines are expected to recover.

Every Marine and sailor has been educated on the requirements for taking the preventative medication and risks associated with failing to follow regimented care. Unit leaders are responsible for setting procedures for taking anti-malaria pills, Strickland said.

&#8220;The MEU medical personnel issue prophylaxis to the Marines and sailors, and unit leaders ensure they take the pill at a consistent point every day,&#8221; he said.

Procedures vary from using mass formations to ensuring that each Marine signs for his pill, and takes it in the company of others, he said.