Soldiers of the 1st Armored Division, led by division chief of staff Col. Mark Calvert, march down Wiesbaden Army Airfield’s main street and past division headquarters on their way to a colors casing ceremony Friday evening﻿. (Photos by Michael Abrams/Stars and Stripes)

Soldiers of the 1st Armored Division, led by division chief of staff Col. Mark Calvert, march down Wiesbaden Army Airfield’s main street and past division headquarters on their way to a colors casing ceremony Friday evening﻿. (Photos by Michael Abrams/Stars and Stripes) 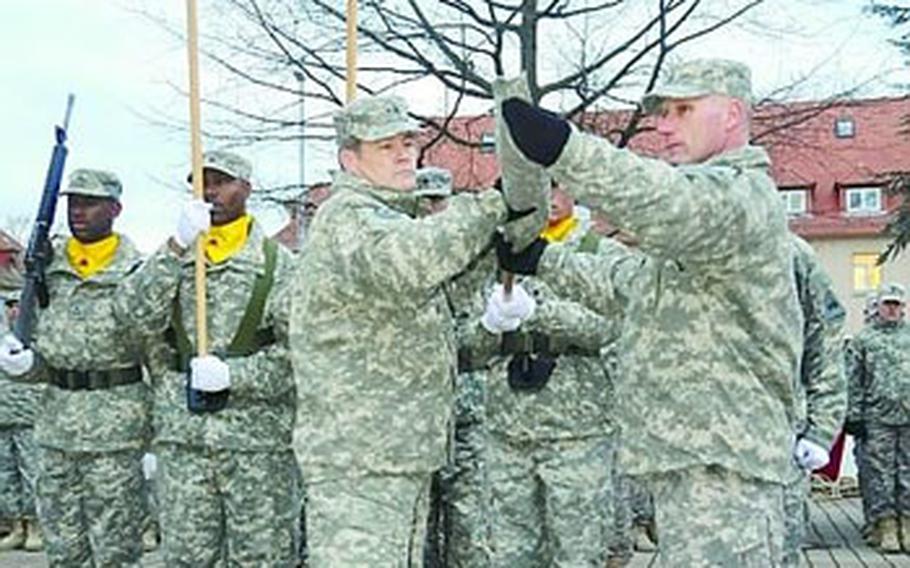 WIESBADEN, Germany &#8212; With a backdrop of traditional Army band music and Christmas songs playing on a chilly Friday evening at Wiesbaden Army Airfield, the 1st Armored Division headquarters cased their colors in a ceremony to mark their upcoming deployment to Iraq.

Around 900 1st AD headquarters soldiers are scheduled to replace approximately 1,200 1st Cavalry Division troops shortly after Christmas as the 1st AD takes over an advisory role in Baghdad and the western province of Anbar, a former hotbed of insurgency traditionally under the jurisdiction of the Marines.

Approximately 3,800 soldiers from a subordinate brigade will be replacing around 13,000 Marines in Anbar province, 1st AD deputy commander Brig. Gen. Ken Tovo said at a training exercise in October.

Although the division is no stranger to the complexities of Iraq, having returned last December from a 15-month deployment to northern Iraq, it will be deploying with a 100 percent leadership changeover and a new set of troops and staff.

&#8220;Five or six years ago, take an organization, shuffle it up like that and try to get ready within a year to go back to war would&#8217;ve been a bridge too far, but today because of the depth of soldiers and noncommissioned officers, we can do that,&#8221; said Brig. Gen. Ralph Baker, a deputy commander of 1st AD.

The division&#8217;s mission in Baghdad and Anbar will be primarily an advisory and training role, as Iraqis are now in the lead in pretty much all aspects as U.S. troops are preparing to withdraw from the country.

After the ceremony, the gathered crowd of adults and children watched the lighting of the airfield&#8217;s Christmas tree.