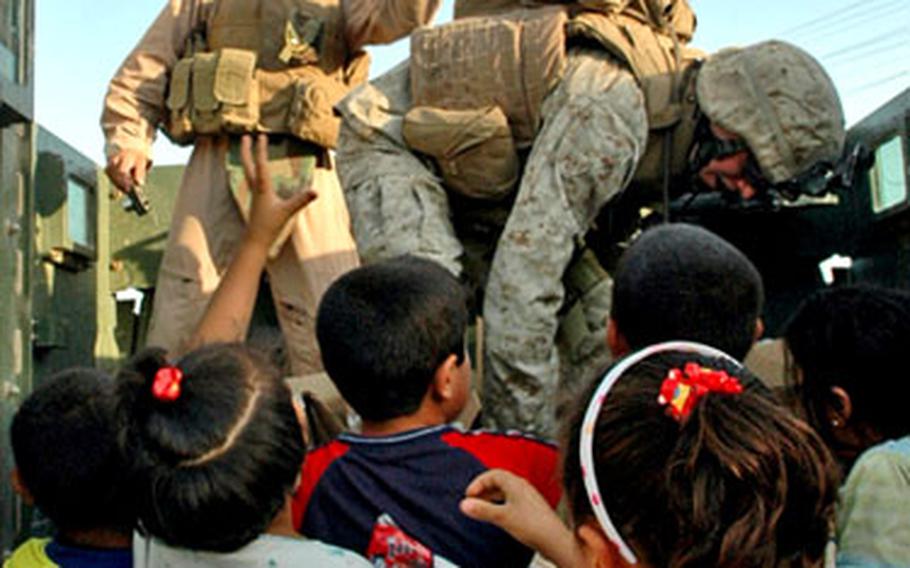 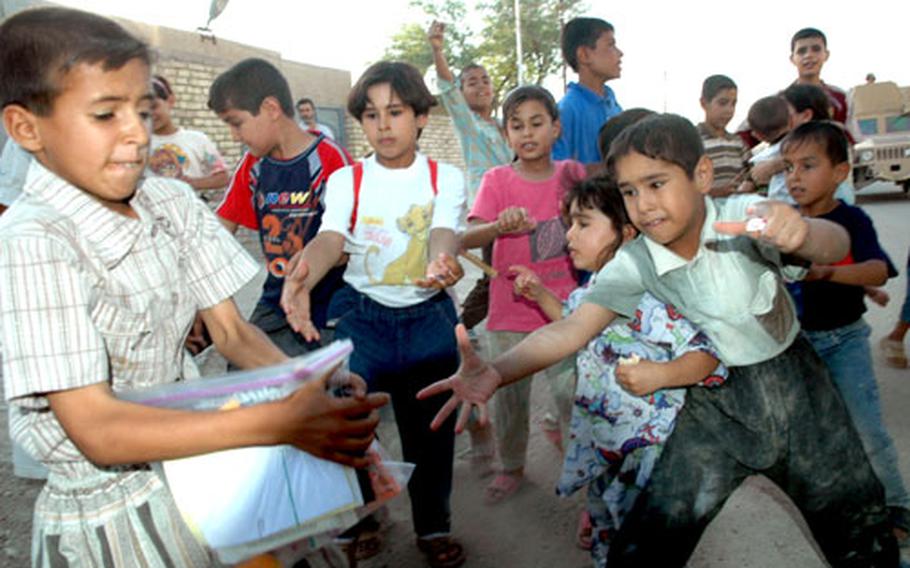 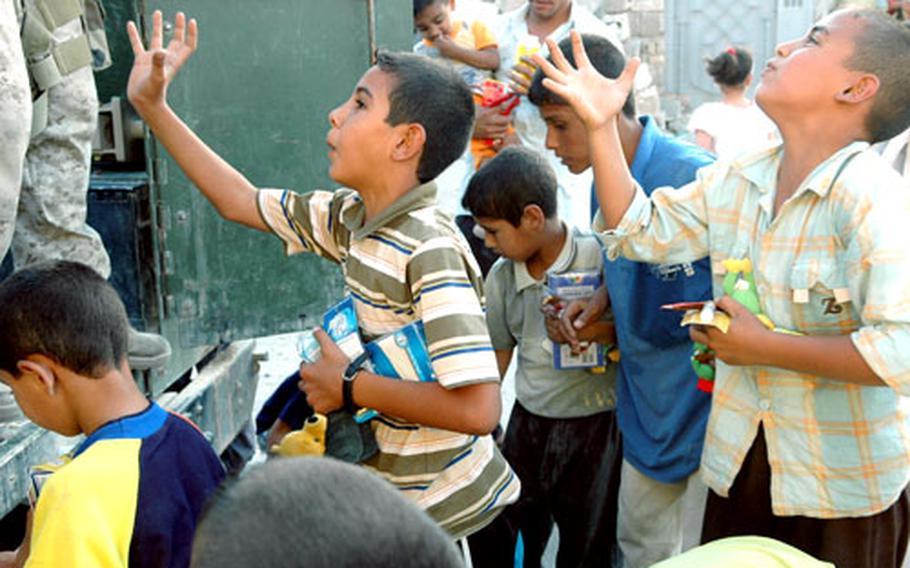 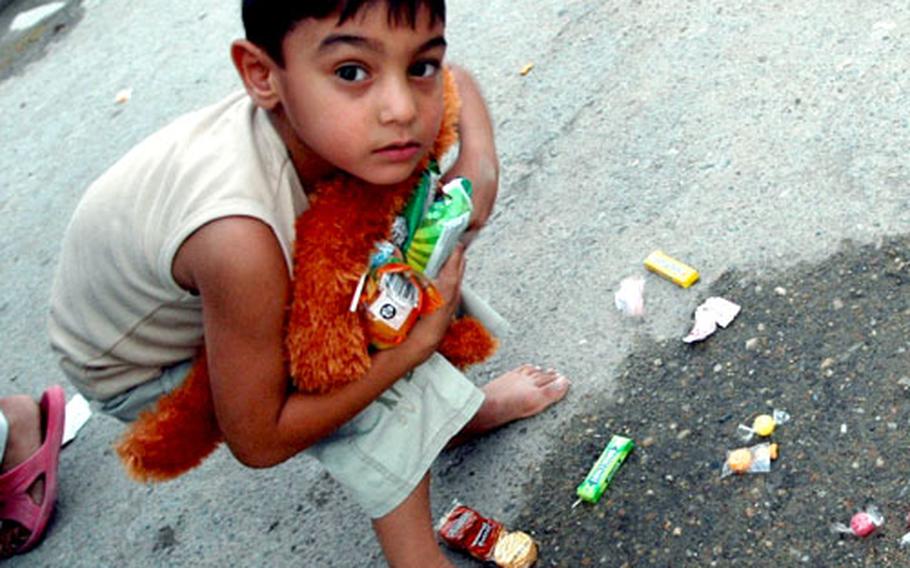 An Iraqi boy scoops up toys and candy handed out by Marines during a civil engagement mission in Fallujah. (Monte Morin / S&S) 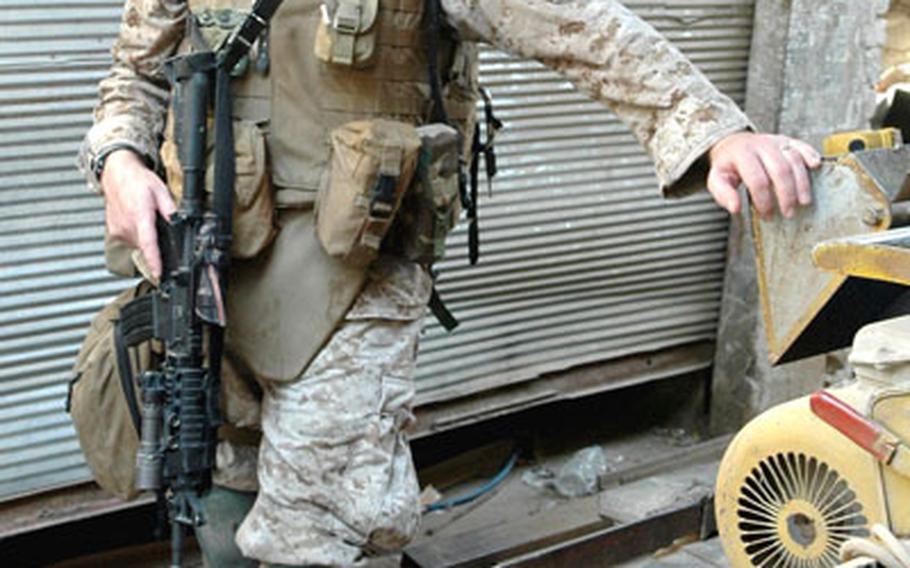 When it comes to policing the meaner streets of this onetime insurgent stronghold &#8212; a city where Marines still dodge sniper fire and pineapple grenades in the back alleys &#8212; even the slowest of boots learn fast that you don&#8217;t always take people at their word.

Williams, a naval reservist and Boston paramedic, first encountered what might be dubbed &#8220;The Fallujah Love Song&#8221; early last month while handing out candy and toys to crowds of squealing children. The handouts, or civil engagement missions, are intended to strengthen the bond between Marines and local Iraqis, as well as undermine the influence of insurgents. The packets of candy, stuffed animals, tubes of toothpaste, notepads, pens, disposable razors and toothbrushes are always a hit with the kids, yet not so popular with the enemy.

Such episodes are an enduring source of stress for soldiers and Marines in Iraq. Many young troops joined the military expecting to fight a conventional war, where opposing armies duke it out with rifles and artillery. Instead, they have found themselves fighting a counterinsurgency, in which the enemy specializes in hit-and-run attacks and melts into the population after triggering roadside bombs or unleashing rocket-propelled grenades.

Marines are also frustrated in many cases by their inability to gain helpful information from local Iraqis. While searching for a sniper last week, Marines encountered locals who denied any knowledge of insurgent activity, even though real and decoy roadside bombs were being laid at their doorstep on a regular basis. When Marines and bomb technicians would arrive to defuse or destroy the explosives, they would be attacked by hidden snipers.

&#8220;How can he not know anything?&#8221; Staff Sgt. Christopher Porylo, 31, of Middletown, Conn., yelled in exasperation recently as he questioned one of the residents Wednesday. &#8220;Somebody planted an IED (improvised explosive device) in front of his home!&#8221;

Iraqis being pulled in many directions

Marines like Porylo say they are well aware of the reasons why local Iraqis fail to cooperate in such investigations. In many instances, they have been cowed by insurgents. Marines say they have heard many stories of insurgents killing, threatening or raping locals who are thought to have cooperated with U.S. or Iraqi security forces.

There are also other factors influencing local Iraqis.

In such an environment then, many Marines say that one of their most pleasurable duties is handing out toys and treats to kids. The sight of a crowd of children jumping and shouting for candy is &#8212; at least momentarily &#8212; far removed from the world of searches, interrogations and attacks.

The enjoyment of such moments is fleeting however.

On the day Williams was greeted with &#8220;Fallujah loves you, Mister,&#8221; Williams recalled two older teenage boys walking past the group of children collecting toys and candy beside his Humvee. The older boys shouted something at the children in Arabic.

For soldiers and Marines in Iraq, the sight of a group of children or adults suddenly disappearing is a sure sign of an impending attack, and Williams and the rest of the Marines braced themselves.

He recalled seeing a car speed at the convoy, and he fired a warning shot into the street in front of it. He remembers backing away from the vehicle and stepping onto a curb.

The corpsman squeezed off three M-16 rounds before his weapon jammed. The pineapple grenade, which had been painted red, thudded on the ground in front of him. It was a dud.

Williams ran behind his Humvee when another insurgent began firing an AK-47 in his direction. One of the bullets punched a hole through the unarmored trunk and would have hit Williams in the head, but lodged itself in a piece of equipment stowed in the trunk.

Days after the attack (the grenade thrower was captured with a bullet wound to his chest) Williams&#8217; platoon returned to the same neighborhood, where they were swarmed by a number of the same children.

Williams said they did not recognize him at first, thinking he looked like every other Marine in Falljuah, but then he greeted several of those he remembered by name.