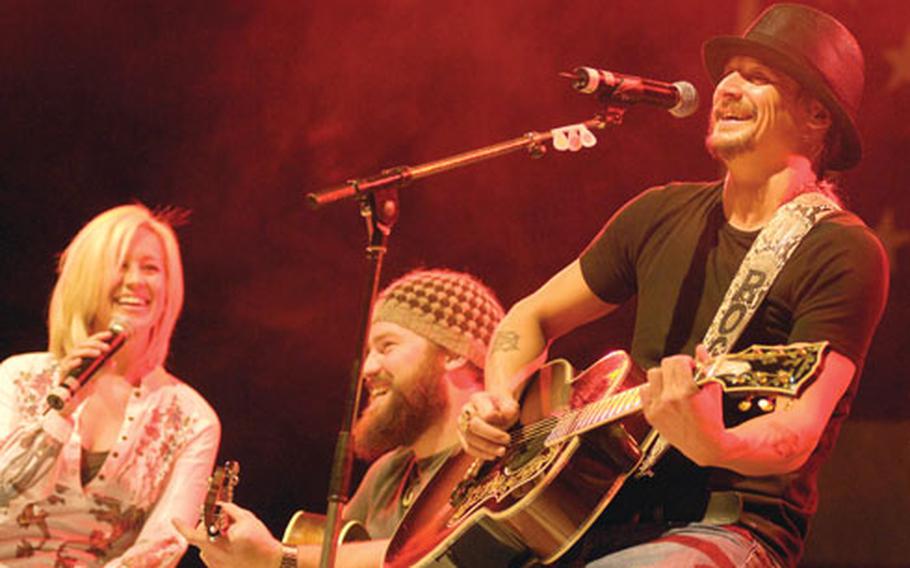 Kid Rock and Zac Brown smile through some botched lyrics during a song Tuesday. (Photos by Ben Bloker/Stripes)

Kid Rock and Zac Brown smile through some botched lyrics during a song Tuesday. (Photos by Ben Bloker/Stripes) 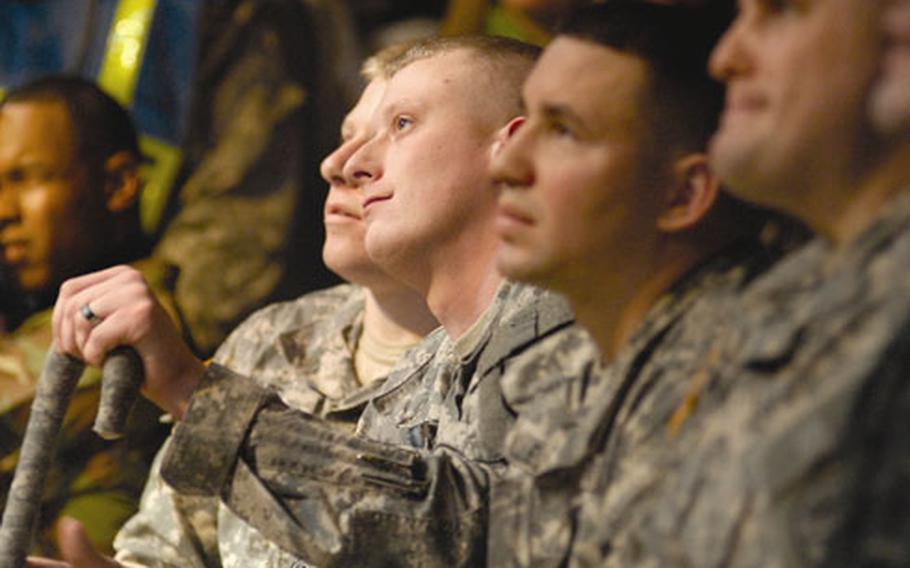 Army Spc. Kris Wynkoop takes in some of Kid Rock’s acoustic grooves during the show. () Comedian Lewis Black rants through a bit on gas and the economy during a show Tuesday at Ramstein Air Base’s Hanger 1. ()

The tunes and laughs came courtesy of the United Service Organizations&#8217; Holiday Troop Visit, with the air base&#8217;s Hangar 1 serving as the venue for the first of nine shows on a whirlwind five-country tour to boost the troops&#8217; spirits.

Chairman of the Joint Chiefs of Staff Adm. Mike Mullen &#8212; with a massive American flag as a backdrop &#8212; got the show started with a brief bio of the performers and some praise for airmen and their family members. Other top brass watching the show included the U.S. Air Forces in Europe commander, Gen. Roger Brady, and the U.S. Army Europe commander, Gen. Carter Ham.

Black, who has performed on late-night talk shows and other high-profile venues, also praised the airmen. He called his first USO Holiday Troop Visit last year "eye-opening and extraordinary."

Black gave the audience some laughs with jokes about the economy, airport security and other easily ridiculed topics.

"I guarantee if they keep it up, the entire country is going to be in the Army," he joked about the people making economic decisions.

Entertainers such as Black, Kid Rock and others aren&#8217;t hard to find to entertain the troops, said Sloan Gibson, USO president and chief executive officer.

"The important thing is [the servicemembers] know these guys appreciate them," Gibson said.

When Pickler did the tour last year, it was her first time out of the country, and she jumped at the chance to give servicemembers a little holiday cheer again this year, Gibson said.

Pickler and the other performers not only entertained the airmen, but they brightened the holidays of some wounded servicemembers with a visit to Landstuhl Regional Medical Center before they took the stage, Gibson said.

"Kellie Pickler, Kid Rock and a bunch of the other guys walk in (to an LRMC hospital room) and the grins go from ear to ear," Gibson said.

Gibson would not say where exactly the tour is headed next, other than they are going somewhere in Afghanistan.

Check out more photos from the USO concert