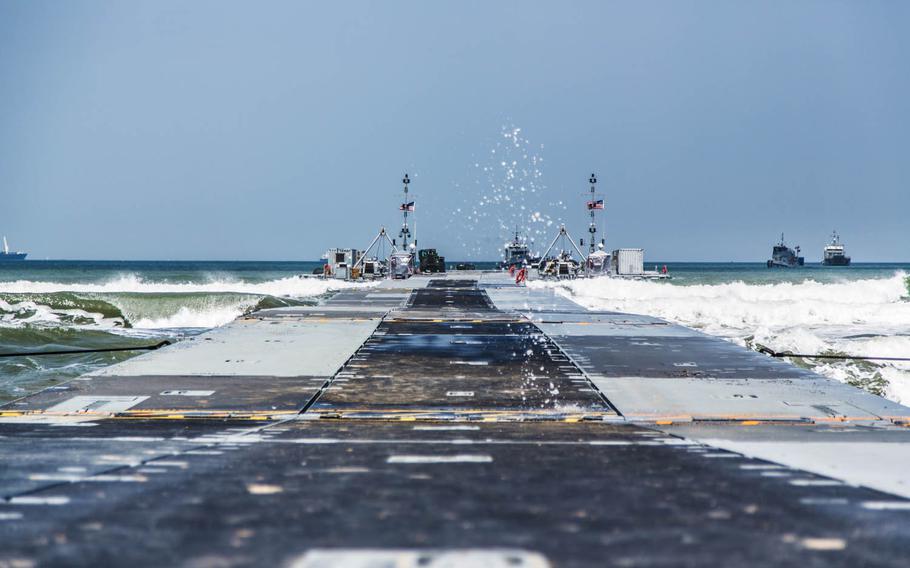 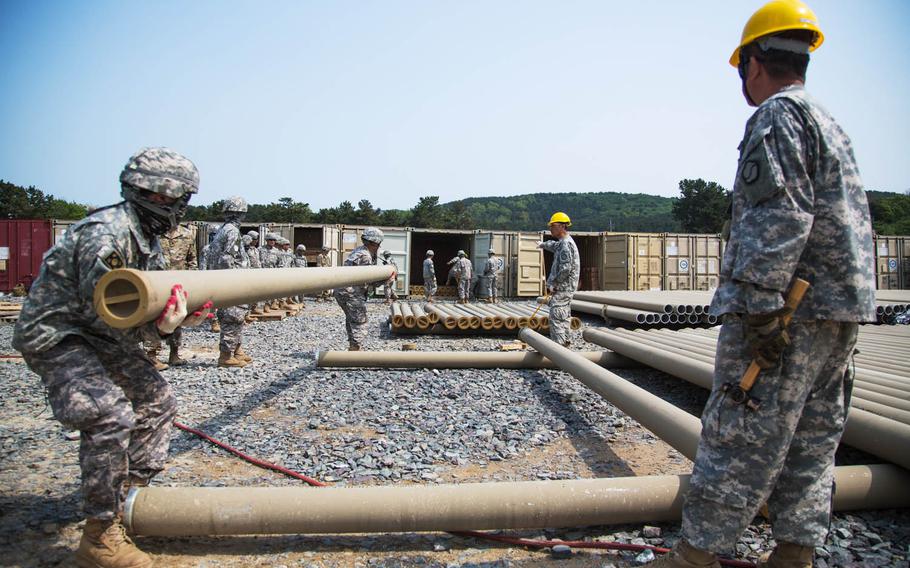 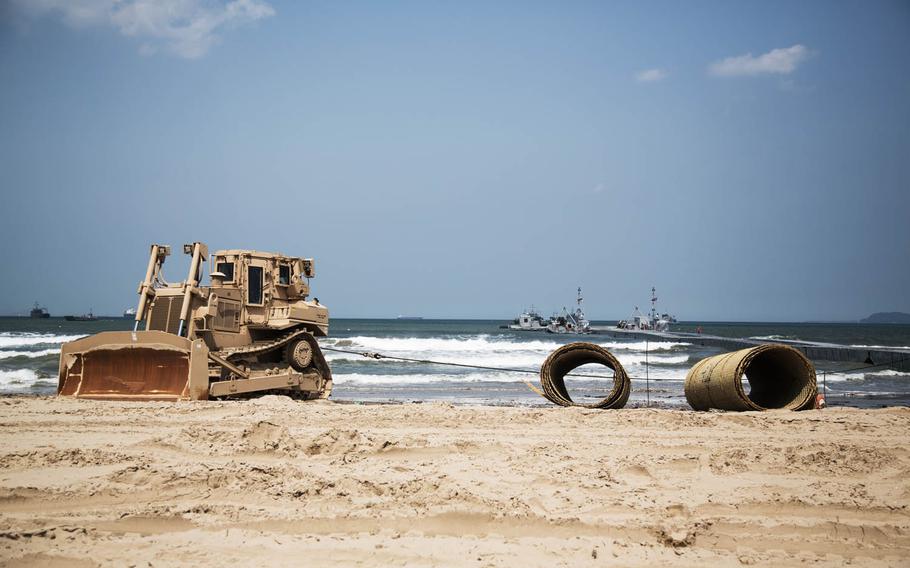 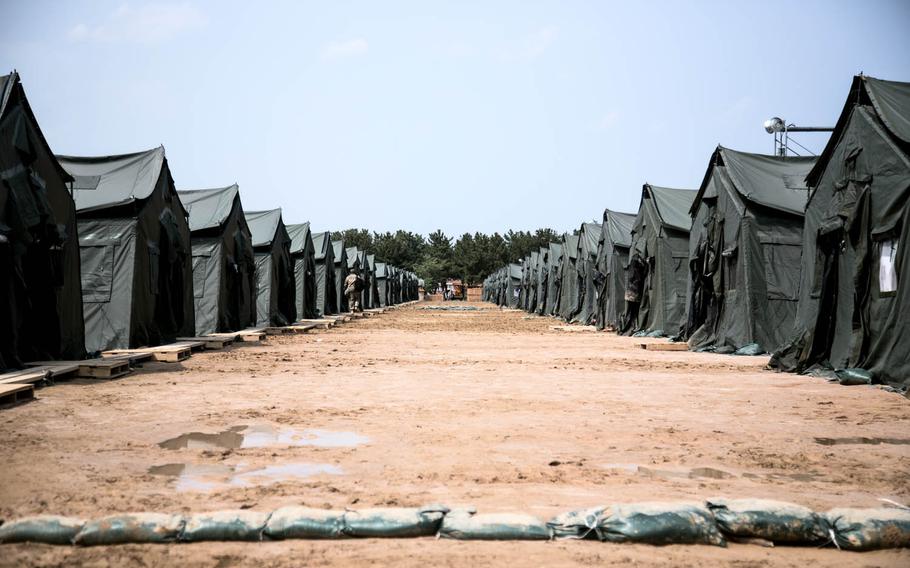 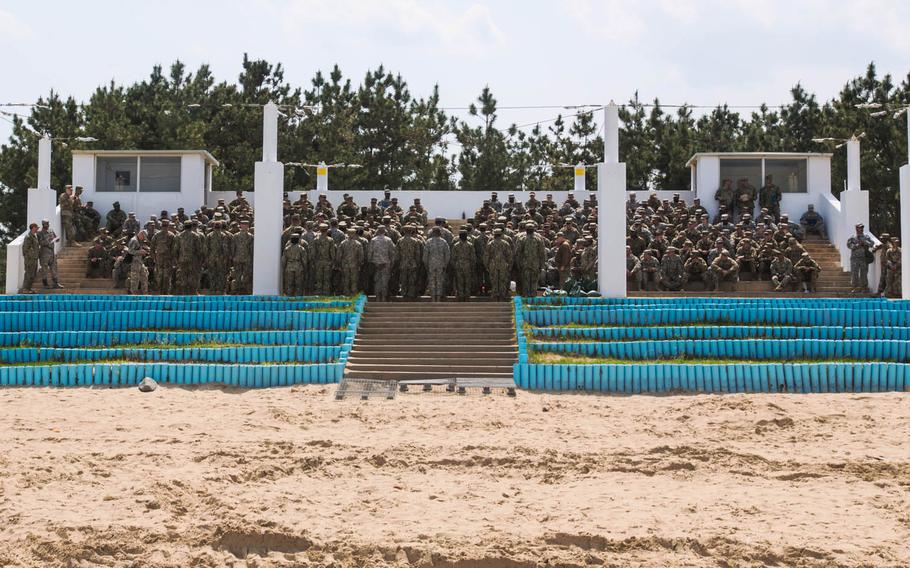 POHANG, South Korea — Tanks, beans and bullets rolled onto the sandy shores of Dogu beach near the southeastern port city of Pohang this month.

Some 2,500 U.S. and 1,200 South Korean troops brought more than 600 vehicles and shipping containers from the sea to the land as part of Operation Pacific Reach. Roughly a quarter of the U.S. side came from off peninsula, including a large contingent of Marines from Japan.

The biennial drill is aimed at ensuring food and supplies will be available should a crisis ever break out on the divided peninsula.

Over a span of two weeks ending on Friday, the operation focused on integrating the logistics capabilities of the two allied nations from air, land and sea.

“This exercise allowed us a crucible to hone those sustainment skills to a very high degree,” the 19th Expeditionary Sustainment commander, Brig. Gen. John Sullivan, told Stars and Stripes.

The heart of Sullivan’s crucible was what is known as joint logistics over the shore. U.S. and South Korean troops constructed a makeshift pier on a beach, then used that to transport vehicles and goods from ship to shore.

Other events included air resupply missions from South Korean C-130s and the establishment of supply distribution centers, which could function in both a humanitarian crisis or wartime setting.

Sullivan said similar exercises in the past would end with the equipment sitting on the beach. This year, however, they pushed the supplies forward and then simulated distribution toward various end points in South Korea.

“Rather than the exercise culminating at the beach, we asked how can we distribute those goods inland, via air, ground or rail?” he said.

They also practiced reversing the flow of supplies and moved 150 pieces of equipment, including 40 Stryker vehicles, from shore to ship.

The troops operated in what the military calls a joint-combined space, with joint meaning multiple branches of the U.S. military and combined meaning multiple countries. Sullivan stressed this environment is the best way to train.

“All of them have different strengths and capabilities, so, combined, all of them as the sum of the whole is much more powerful than its constituents,” he said in an interview on Tuesday.

“If you really understand the capabilities your partners are bringing to the fight, and you’ve established relationships with those partners, you have a common basis of understanding to be able to operate at a much higher level than if you’ve never worked or rehearsed together,” he said.

At the end of the day, the general pointed out, Pacific Reach and the military sustainment mission is to give combat troops a way forward.

“What you want to do as a logistician is to provide your commander options,” Sullivan said.

With roughly 28,500 U.S. servicemembers stationed on the Korean peninsula, Sullivan’s team won’t have much time for a breather after Pacific Reach.

“Sustainment is never done,” Sullivan said. “After the exercise we need to refit, reset and be ready.”