Troops take to the road for ‘Manchu Mile’ 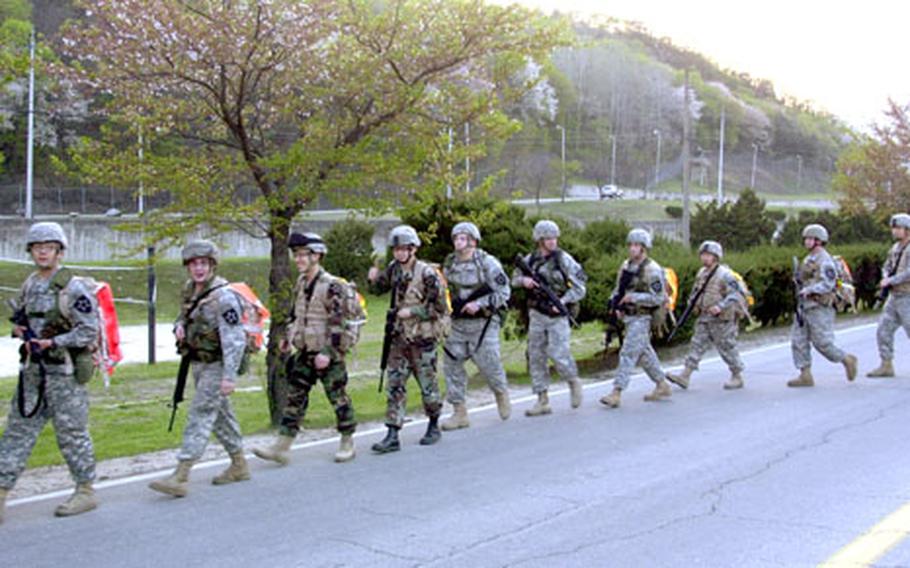 The &#8220;Manchu Mile&#8221; even drew some airmen, a couple of judge advocate lawyers and Brig. Gen. John Johnson, assistant division commander for maneuvers.

Each marcher dressed in battle gear, including helmet, rifle and backpack.

Others labeled Mile 20 the toughest of the march, which commemorates the regiment&#8217;s 85-mile trek to battle at Tientsin during the 1900 Boxer Rebellion in China.

The marchers were scheduled to take two breaks. Pfc. Daniel Ochoa, of 2-9, sometimes wishes they didn&#8217;t have breaks because it&#8217;s that much tougher to get the aching joints and muscles moving again.

For finishing the march, Ochoa and his fellow soldiers receive distinctive belt buckles &#8212; inscribed with &#8220;Keep Up The Fire&#8221; &#8212; authorized for wear while in uniform.

Taylor and others checked their gear and set off in groups just as the sun set over Dongducheon&#8217;s newly green mountains.