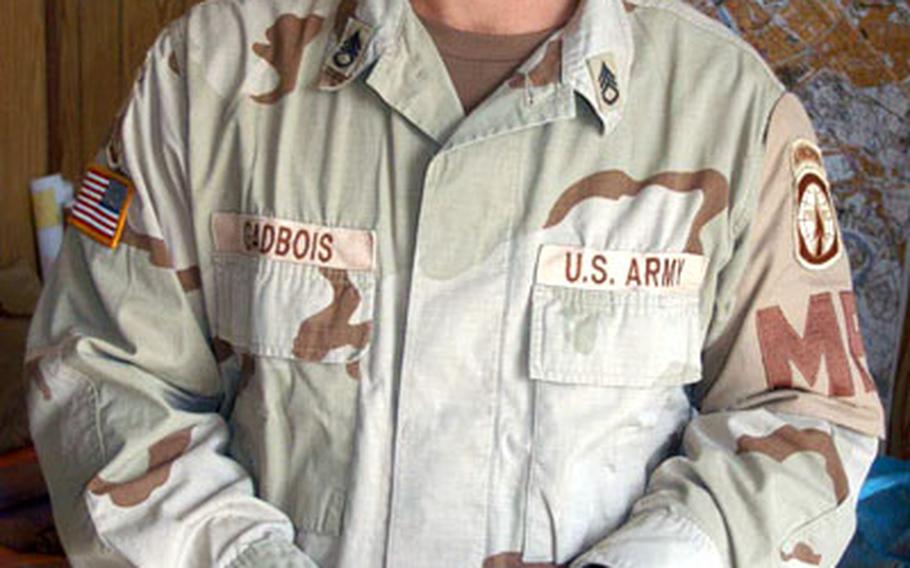 BAGHDAD &#8212; In drawers and footlockers, servicemembers in Iraq are banking on the future by hoarding millions of Iraq&#8217;s year- old currency, the dinar.

Many suspect the dinar&#8217;s precipitous drop in the past decade could mean a huge rebound ahead. Each dinar was once worth a few dollars; they&#8217;re now worth a fraction of a penny apiece.

If post-war Kuwait is any example, they might be right: A Kuwaiti dinar was valued at a about a dime after the war. Each now brings in $3.40.

&#8220;If only the country turns around,&#8221; said one investor, Staff Sgt. Matthew Gadbois, a Vermont National Guardsman with the 1st Battalion, 86th Field Artillery at Camp Victory, Baghdad.

The two, and most soldiers they know, have picked up a few hundred thousand dinars &#8212; equivalent to a couple hundred dollars. They know others who have bought considerably more.

If the value jumps just a bit &#8212; from 1/16th of a penny to 1/8th of a penny for example, investors double their money. If it jumps to a few cents, they can start paying off mortgages, the goal for Gadbois.

He learned of the scheme from a fellow soldier who, he adds, likes to gamble.

Iraq has a few attributes that make it attractive. The most obvious is oil, and the fact that it could blossom into a functional country.

Still the government could overspend and weaken the economy despite its oil. And there&#8217;s always inflation to dampen the already low value.

&#8220;While that is a nice idea, soldiers probably shouldn&#8217;t be currency speculators,&#8221; said Michael A. Goldstein, associate professor of finance at Babson College in Massachusetts in an e-mailed statement. &#8220;All sorts of things could happen, especially inflation in dinars. This is likely a sucker bet &#8212; if the major investment banks aren&#8217;t speculating, neither should your average GI.&#8221;

He points to the example in Eastern Europe after the Cold War. Gains in currency value were eroded by inflation as the country developed.

&#8220;One of the easiest ways to finance government expenditures is just to print more money and spend it. When the government prints more money, it causes inflation,&#8221; he says.

It might also be difficult or expensive to off-load the dinars down the road. The few banks that buy foreign currency in the States charge fees for doing so, he says.

Many soldiers recognize the gamble and are prepared to wait years to see what happens.

&#8220;It&#8217;s not really a big investment,&#8221; says Capt. Scott Moreland, currently serving with the 1st Battalion, 185th Armor Regiment of the California National Guard in Camp Scania, Iraq. &#8220;Most of us have thrown a few hundred bucks at it to see what happens. Your odds are better than they are in Vegas.&#8221;

He adds that Department of Defense savings programs are probably a better bet.

Military investors should note that U.S. customs laws require them to declare if they bring home more than the equivalent of $10,000 in any currency.

And post offices in theater forbid mailing currency home. But there is no Department of Defense regulation to stop them, according to military officials.

The get-rich-quick idea isn&#8217;t limited to those serving in Iraq.

On the auction Web site eBay, dinars sell for marginally more than the going rate. A recent sale collected $75 for 100,000 dinars. Under the current exchange rate, that amount should cost about $68.

Scores of vendors online have been set up just to sell dinars. In one case, a million dinars, worth about $685, was on sale for $895.

One of these sites sums up the efforts in its name: BetOnIraq.com.

Its Web site adds a caveat: &#8220;We sell genuine currency that, in our opinion, stands a good chance of appreciating in value. We can offer no guarantees of a return on investment.&#8221;

Goldstein adds that as a gamble the idea isn&#8217;t crazy, but it&#8217;s certainly not a wise investment.

Sanctions following the Gulf War caused the currency to plunge, according to the Central Bank of Iraq.