Troops take a back seat to cargo on way to Baghdad 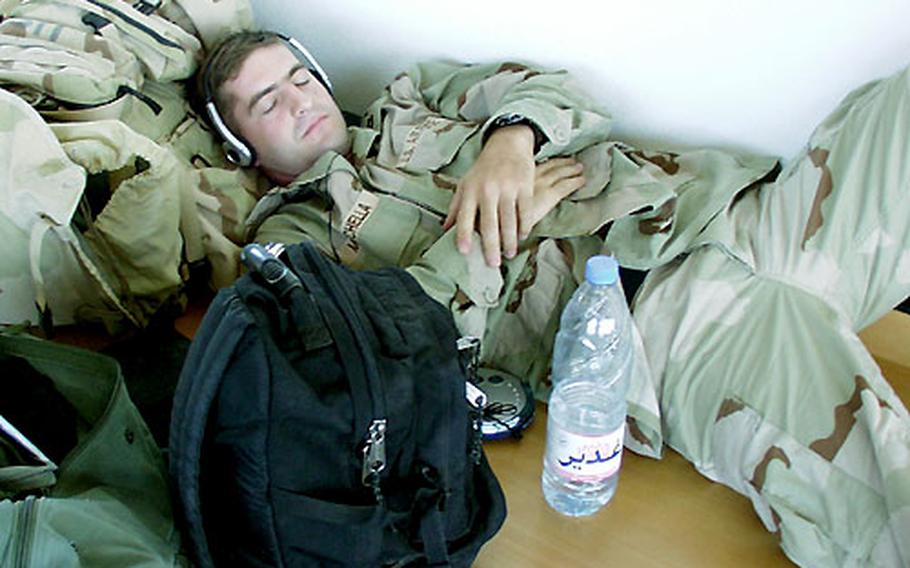 Air Force Capt. Robert Moschella, with the 13th Air Support Operations Squadron at Al Asad airfield in Iraq, tries to catch some sleep while waiting Monday for a flight out of Ramstein Air Base, Germany, back to “the box.” (Lisa Burgess / S&S)

Air Force Capt. Robert Moschella, with the 13th Air Support Operations Squadron at Al Asad airfield in Iraq, tries to catch some sleep while waiting Monday for a flight out of Ramstein Air Base, Germany, back to “the box.” (Lisa Burgess / S&S) 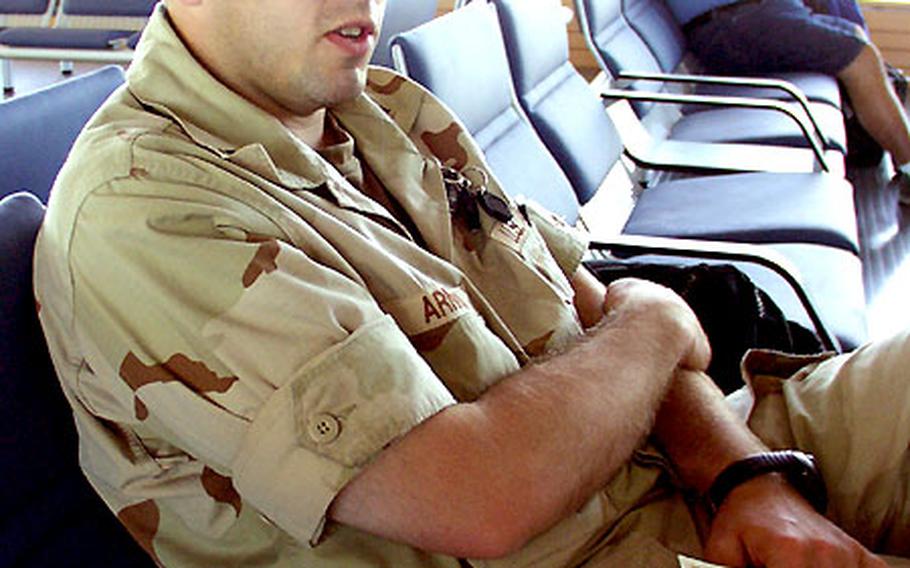 Arnold and a half-dozen other soldiers in his squadron, which is supporting the Army&#8217;s 101st Airborne Division around Mosul, were selected for a temporary-duty trip to Germany for a conference July 8-9 conducted by the 4th Air Support Group at Ramstein Air Base.

Predictably, the days flew by. When the conference was over, Arnold and his colleagues went shopping for essential equipment and spare parts, as well as treats for their less-fortunate mates back in Iraq.

The group then dashed to Ramstein terminal Friday to make a 4 p.m. show time to catch a C-141 to Baghdad.

Three days later, Arnold was still there, in the terminal, waiting to get to Baghdad. He is 48th on a list of 80 people, all flying on &#8220;space required&#8221; status, and all waiting anywhere from 24 hours to five days.

And forget about flying to Kirkuk. The passenger list is even longer.

But for Arnold and about 170 fellow servicemembers cooling their heels at Ramstein on Monday, it was a serious problem.

With the surge of unit deployments and military flights over, getting to Iraq can be a long, long process. At Ramstein over the past three months, &#8220;worst-case, we&#8217;ve had some people waiting to go for two weeks to 18 days,&#8221; said Fred Cerne, a day shift supervisor.

It&#8217;s been like this all summer, and it may be like this for some time to come, said Master Sgt. William Mahaffey, superintendent of passenger services at Ramstein.

That doesn&#8217;t mean planes aren&#8217;t going into Iraq. But the planes going are transports, stuffed to the walls with cargo to support troops already downrange.

To get units in place during the buildup to the Iraqi war, military commands would reserve dedicated aircraft from the Air Mobility Command at Scott Air Force Base, Ill.

But once the units were in place, AMC turned its attention to sustainment operations, concentrating on cargo transportation. That means that passengers on orders to go to Iraq have to be shoe-horned into any spaces that remain, once Iraq-bound planes are loaded, Mahaffey said.

Those spaces are rare. At Ramstein, from Friday to Sunday, five aircraft left for Baghdad International Airport. On those five aircraft, there were a total of five seats for passengers.

The type of aircraft going to Iraq has something to do with the delay, said Mahaffey, an 18-year veteran. The Air Force is sending mostly C-141s, which are relatively small, and C-17s, which are enormous, but lack the huge passenger deck that the older C-5s all boast. Even a fully loaded C-5 can fit passengers up on that deck.

But the C-5 is much less agile and versatile than the C-17, which can be flown into airports with less runway space and less apron space, Mahaffey said. In the case of Iraq, where runway conditions may not be optimal and combat is always a possibility, &#8220;the C-17 is more strategically sound for that kind of situation,&#8221; he said.

Mahaffey acknowledged that eventually someone in charge must decide it is time to get &#8220;space required&#8221; personnel where they&#8217;ve been ordered, but said &#8220;passenger-generated missions&#8221; to relieve backlogs are not routine and involve a lengthy process.

First, a major command &#8212; such as the U.S. Central Command or U.S. European Command &#8212; must inform AMC officials that the passenger situation has reached critical mass at a given airport. Then &#8220;AMC has to see if they have an airframe&#8221; available to move the passengers, Mahaffey said.

The entire process can take 30 days or more, he said.