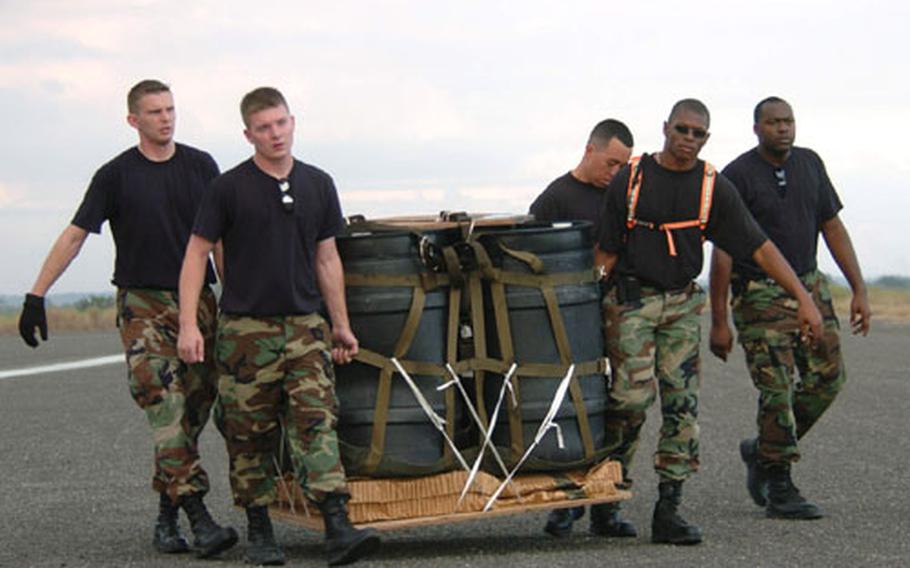 Airmen from the 18th Logistics Readiness Squadron/combat mobility element, Kadena Air Base, Japan, transport a container delivery system (CDS) after it landed at a drop zone during a low altitude airdrop training at Basa Air Base, Philippines, during exercise Balikatan 2004. (Courtesy of USAF)

Airmen from the 18th Logistics Readiness Squadron/combat mobility element, Kadena Air Base, Japan, transport a container delivery system (CDS) after it landed at a drop zone during a low altitude airdrop training at Basa Air Base, Philippines, during exercise Balikatan 2004. (Courtesy of USAF) 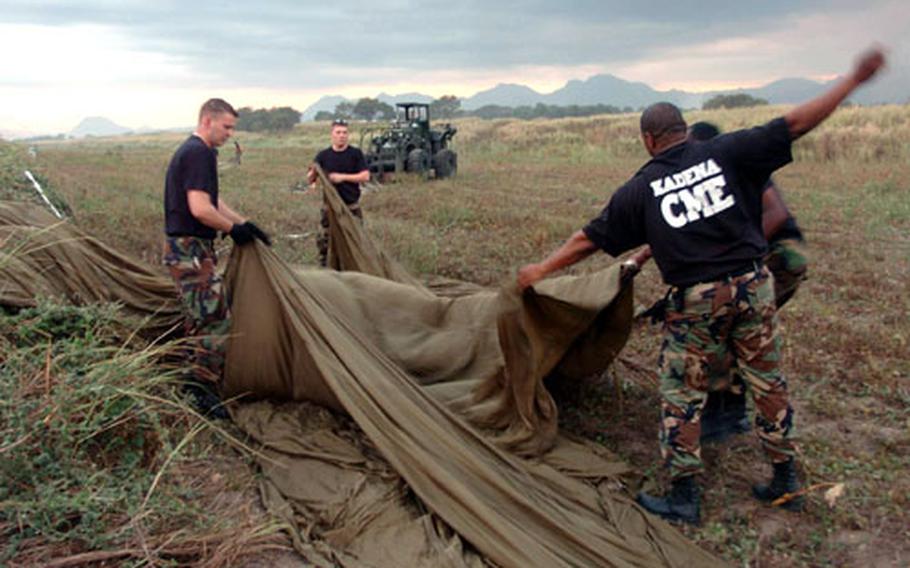 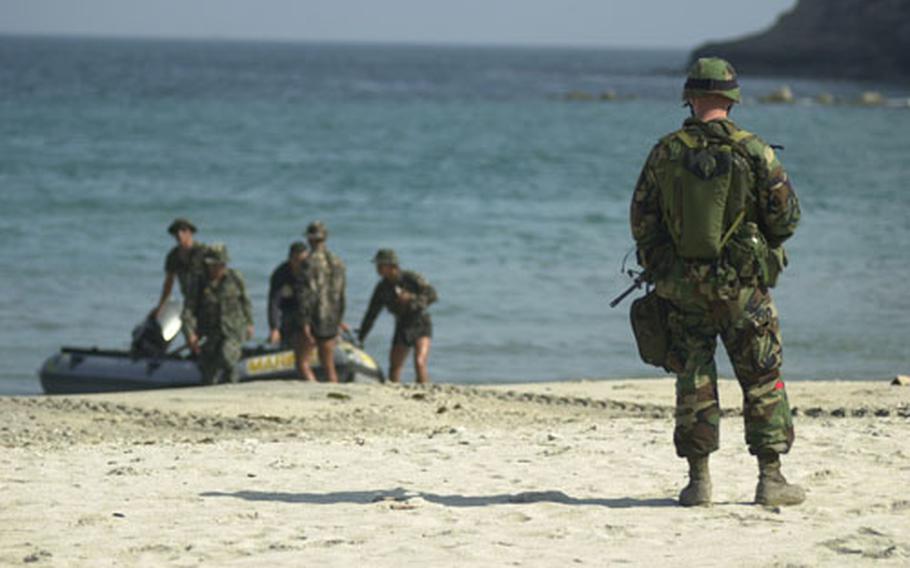 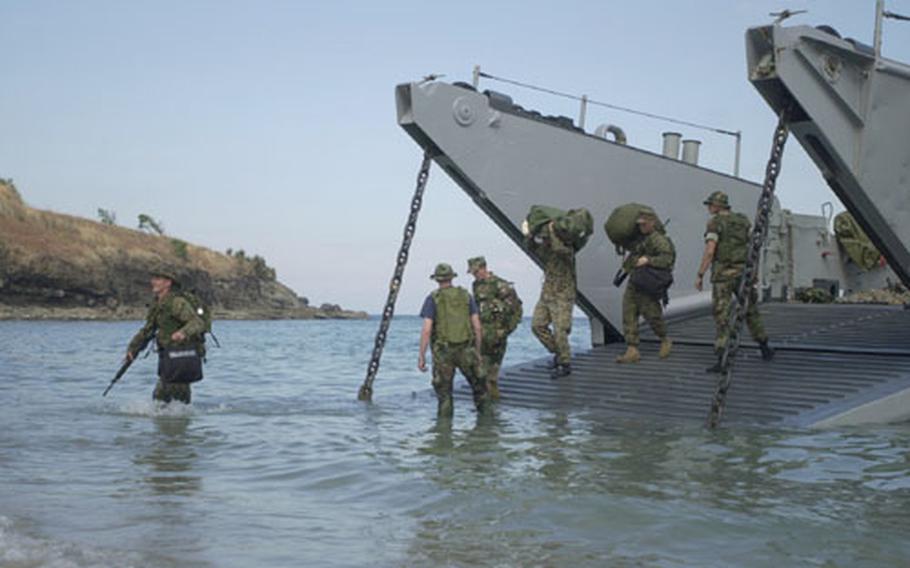 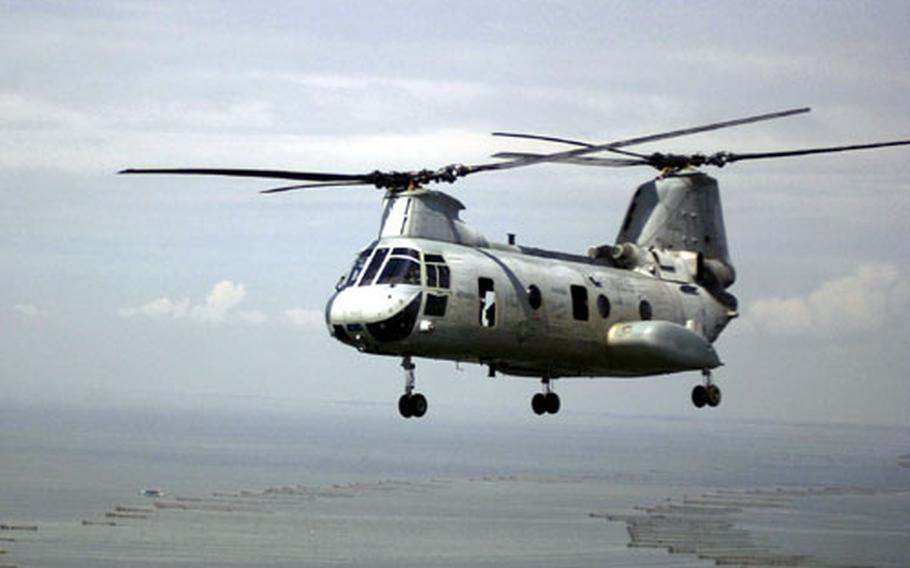 A CH-46 from Marine Medium Helicopter Squadron-262, based out of Okinawa, Japan, flies off the coast of the Republic of the Philippines a day prior to the opening of Exercise Balikatan 2004. More than 2,500 U.S. and 2,300 Filipino military personnel are taking part in the two-week annual exercise. (Fred Zimmerman / S&S)

MARINE BASE TERNATE, Philippines &#8212; As more than 700 U.S. Marines and sailors poured onto Philippine shores this week for their annual joint exercise with Philippine marines, Philippine Col. Natalio Ecarma said it&#8217;s important for the forces to train together because he believes they&#8217;ll someday operate together.

And each has something to learn from the other, troops from both countries said.

&#8220;We know the area, you have the equipment ... we can help you, and you can help us,&#8221; Ecarma said. For instance, he pointed out, Philippine marines are well-trained in fighting insurgency and terrorism, which require far different skills from conventional warfare.

While the Marines are training on land, 61 AFP Navy personnel will spend two weeks on the USS Fort McHenry, training with the U.S. Navy. The McHenry is from Sasebo Naval Base, Japan.

The U.S. and Philippine forces also will focus on amphibious operations training, planning processes and techniques and logistics, said AFP Marine Capt. Rommel Abrau, public information officer. The troops will train each other in their forms of martial arts; a U.S. Navy underwater team will train AFP Navy and Marine divers.

The joint training should develop the two forces&#8217; ability to work together, Abrau said. &#8220;It&#8217;s important that we develop rapport and long-lasting friendships.&#8221;

Ecarma said training with &#8220;brother Marines&#8221; is different but made easier because the two forces share the same ideals.