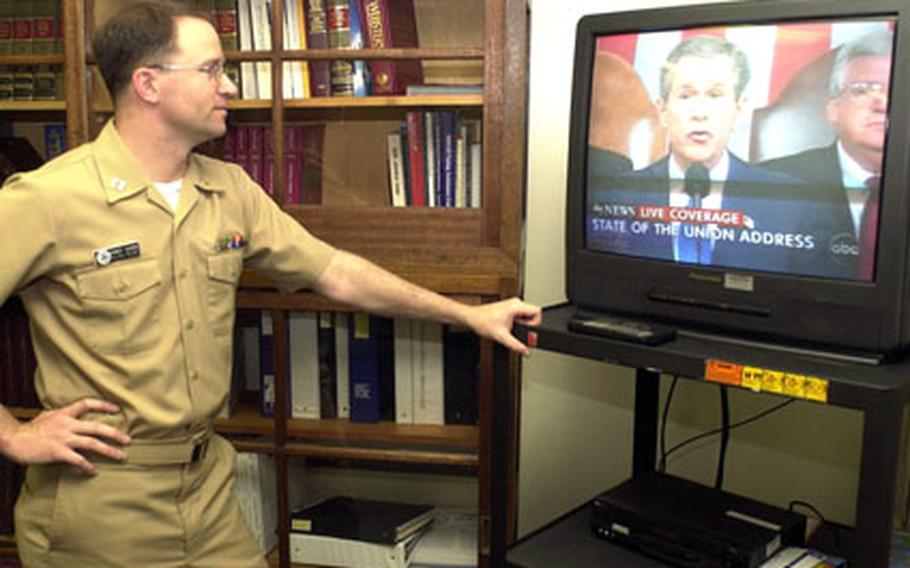 President Bush&#8217;s annual State of the Union address appears to have left servicemembers across the Pacific feeling that war in Iraq is inevitable.

On Okinawa, Marine Staff Sgt. Rodney Grant said he felt Bush was justified in saying America was willing to go it alone, if needed, to oust Iraqi leader Saddam Hussein, whom Bush called a dictator.

Grant said he was fully convinced &#8220;the commander in chief&#8221; was focused properly in saying he&#8217;d lead a coalition into Iraq to ensure the safety and freedom of the world.

During his hourlong speech, Bush addressed America&#8217;s fighting forces, alerting them that &#8220;crucial hours lay ahead &#8230; The success of our cause depends on you &#8230; You believe in America and America believes in you.&#8221;

Marine Staff Sgt. Randy Poole said he believed the president&#8217;s speech made clear that the U.S. military had the full support of the U.S. government. But Poole also said that although he fully supports his commander in chief&#8217;s decisions, he&#8217;s concerned the United States is acting too soon.

&#8220;People should have patience and don&#8217;t expect Bush to show his hand,&#8221; said the chief warrant officer, who predicted America would suffer if it waits any longer to act.

Grant said he agreed with Bush that the time for negotiations has passed. &#8220;Otherwise, you&#8217;re using rhetoric over and over again. It loses its effect over time.&#8221;

The Marine also said he considers it an honor to back Bush&#8217;s resolve to use U.S. troops against international terrorists and weapons of mass destruction. &#8220;Sometimes liberty and freedom are things that have to be fought for,&#8221; he said.

At Yongsan Garrison, South Korea, Sgt. 1st Class Edwin Marengo said Bush was direct in addressing both Iraq and terrorists. &#8220;He said the U.S. has had it up to here with them,&#8221; Marengo said.

Bush answered many current questions about Iraq and America&#8217;s stance on the issue, said Wilson, who noted that Bush spoke &#8220;with a certain confidence,&#8221; indicating that &#8220;he has a lot of information about the problem.&#8221;

&#8220;It was persuasive for Americans, especially to the military. But &#8230; I wouldn&#8217;t say too many of the coalition allies would be persuaded by his speech, especially the ones who&#8217;ve dropped out, like France and Germany. A lot of it was reiterated from speeches we&#8217;ve already heard,&#8221; Schultz said.

Rohana Hooper listened intently from the perspective of a Navy spouse. She is married to Chief Petty Officer Steven Hooper, who serves aboard the amphibious assault ship USS Essex.