Troops say Afghanistan is not ready for U.S. drawdown 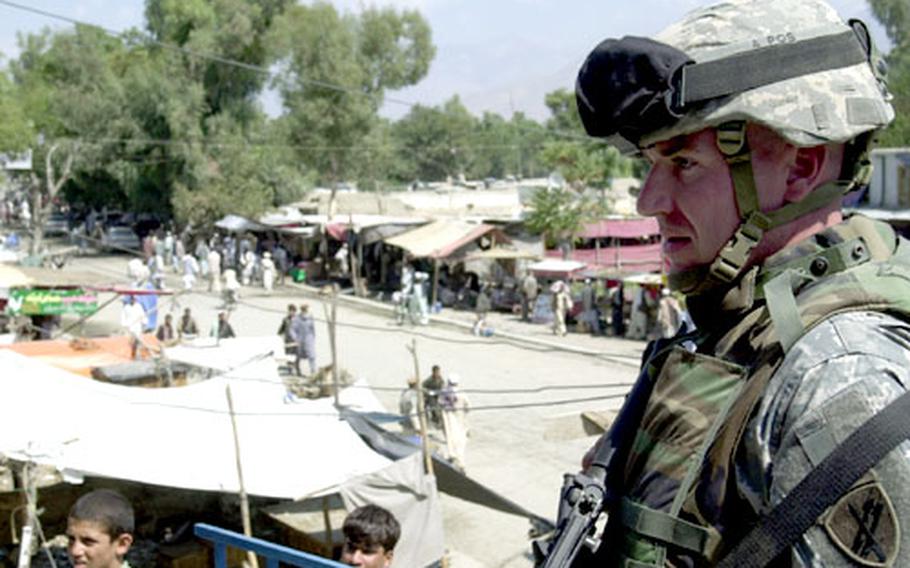 Sgt. Timothy Sersig, a civil affairs soldier at Forward Operating Base Mehtar Lam, said Wednesday that security is not stable enough in Afghanistan for U.S. troops to leave. Sersig is pictured during a mission in downtown Mehtar Lam on Tuesday. (Steve Mraz / S&S)

MEHTAR LAM, Afghanistan &#8212; For troops at the forward operating bases in the hinterlands of Afghanistan, word that Afghan President Hamid Karzai questioned the need for major military operations was news to them.

Overwhelmingly, they said that Afghanistan is not ready for a scaled-down U.S. presence.

Karzai also called for an end to U.S. airstrikes, but Sersig said air support provides relief to troops on the ground. In early August, Sersig was traveling in a convoy when a roadside bomb exploded near a Humvee. Jets arrived soon after and stayed in the area to offer air support if needed.

&#8220;Just to know that air support was there eased my mind along with a lot of other soldiers and Marines,&#8221; Sersig said.

If U.S. troops were to leave now, everything they have accomplished would have been in vain, said Sgt. Jonah Brenner, with the San Antonio-based 321st Civil Affairs Brigade, which is attached to the 492nd Civil Affairs Battalion.

Brenner&#8217;s current deployment to Afghanistan is his second since the October 2001 invasion. While Brenner said the country has progressed greatly since his first deployment, Afghanistan is just not ready for U.S. troops to leave.

The preference is Afghans taking the lead &#8220;with coalition forces taking a supporting role,&#8221; O&#8217;Hara said. &#8220;We agree there is a requirement for consultation and coordination. We see a need to inform the Afghan government in almost everything we do.&#8221;

Lt. Col. Tim McGuire, commander of the 1st Battalion, 508th Infantry Regiment and also commander of Task Force Fury in Paktika province, said Karzai&#8217;s wish for the Afghan government to be informed is already happening. And virtually every patrol involves ANA and/or ANP forces &#8220;and preferably both. That is what we do here in Task Force Fury.&#8221;

McGuire said it is &#8220;imperative that we work hand in hand&#8221; with Afghan authorities and said that&#8217;s already happening.

Others asked expressed some surprise at hearing the news. Communication with the outside world is limited at most forward operating bases. But they joined their commander in saying that much of what Karzai was suggesting was already happening.