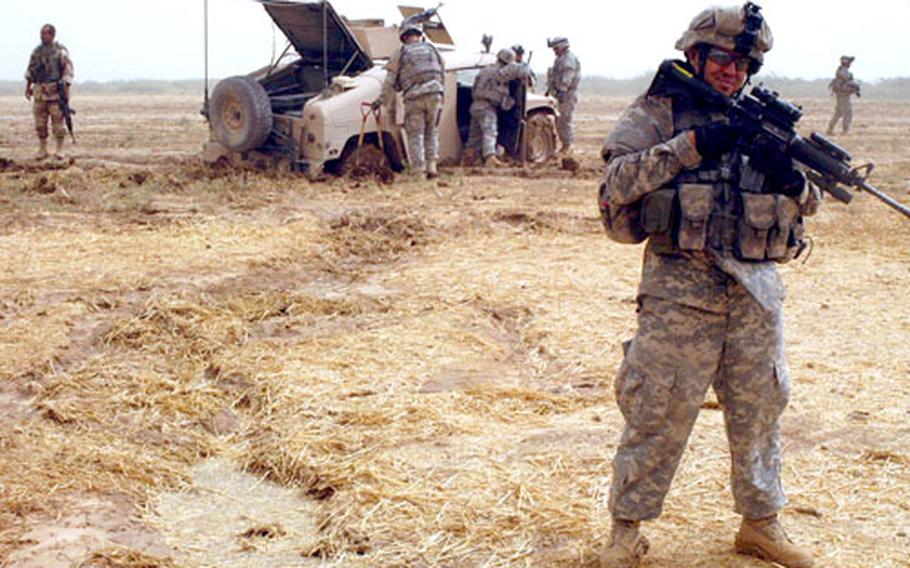 Pvt. 1st Class Timothy Amerine, right, betrays a hint of amusement at his company commander’s plight in a field south of Kirkuk on Tuesday near the town of Rashad. Amerine and his squad of personal security detachment troops from Company A, 2nd Battalion, 35th Infantry Regiment, were in the area to perform reconnaissance on a rural area the company recently took over from another unit. (Ben Murray / S&S)

Pvt. 1st Class Timothy Amerine, right, betrays a hint of amusement at his company commander’s plight in a field south of Kirkuk on Tuesday near the town of Rashad. Amerine and his squad of personal security detachment troops from Company A, 2nd Battalion, 35th Infantry Regiment, were in the area to perform reconnaissance on a rural area the company recently took over from another unit. (Ben Murray / S&S) Staff Sgt. Samuel Combs from Company A, 2nd Battalion, 35th Infantry Regiment, radios his commander minutes after a roadside bomb detonated next to the Humvee traveling in front of his truck. The men from the 2-35 "Cacti" were just a few miles from Forward Operating Base Warrior in Kirkuk after a long patrol in an unfamiliar area south of the city when the bomb exploded. Soldiers in the targeted Humvee (not pictured) were unhurt. (Ben Murray / S&S) 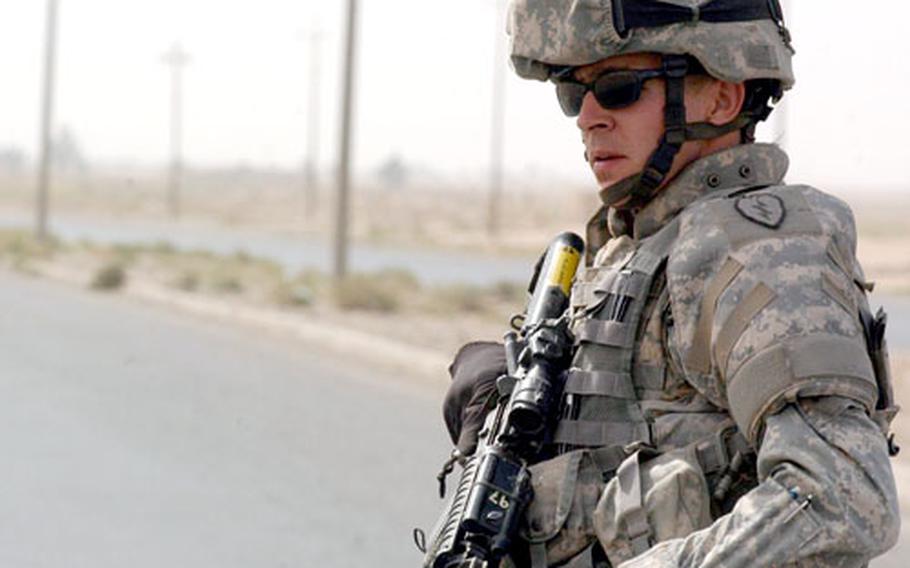 Pvt. 1st Class Terrance Fusek from Company A, 2nd Battalion, 35th Infantry Regiment hailing from Schofield Barracks, Hawaii, scans for the triggerman in a roadside bomb explosion that hit a Humvee just in front of him Tuesday on Route Clemson south of Kirkuk. (Ben Murray / S&S)

KIRKUK, Iraq &#8212; Like anyone who inherits a piece of real estate, Capt. Jonathan Graebener had a number of questions about the parcel of land that had been placed in his care recently.

Is it large? Well situated? Is it riddled with the evidence of numerous improvised bombs?

Graebener and members of his Company A, 2nd Battalion, 35th Infantry Regiment, set out to find answers to those questions Tuesday after a large tract of desert southwest of Kirkuk was recently added to their area of responsibility.

What they found was a sprawling expanse of mostly empty farmland, dotted by tiny towns and bracketed by roads pocked with ominously large bomb craters.

It was new territory for the Schofield Barracks, Hawaii-based troops. No one from the unit working out of Forward Operating Base Warrior had been so far to the southwest since the unit arrived in August, Graebener said.

Previously, the zone had been periodically patrolled by the 2nd Battalion, 27th Infantry Regiment, but that unit had so many security concerns in the restive city of Hawijah that the sector was handed off.

Graebener also set out Tuesday to make first contact with a group of Iraqi army troops who man a nearby traffic checkpoint to perform a joint patrol with them.

The Iraqi troops have recently been the target of repeated attacks in the form of mortars and car bombs, Graebener said, and he wanted to get a look at where the attacks might be coming from.

For the most part, areas outside of Kirkuk are overseen by Iraqi troops, though U.S. forces also watch over them to make sure local security forces are making their presence felt.

Unlike central Kirkuk, where a portion of the population is made up of generally American-friendly Kurds, the southern areas are more uniformly Arab. With a brooding hostility and a remote location, it is a danger zone of particularly large roadside bombs, said an outgoing captain from the 2-27 who used to patrol the area.

It was the elements, however, that conspired to hamper Company A&#8217;s mission Tuesday. High winds whipped up choking clouds of dust and reduced visibility to as low as a few yards at times, before deep mud bogged down Graebener&#8217;s Humvee.

The delays and slow driving over narrow, pitted roads combined for a particularly tedious slog in hot Humvees for the troops. They were back to within five miles of Forward Operating Base Warrior when things went boom.

Rolling back to the base, the middle Humvee in the three-truck convoy was hit by a roadside bomb.

Roadside bombs are a frequent &#8212; but not frequently lethal &#8212; threat in the Kirkuk area, soldiers said, and no one in the truck was hurt.

Sitting in the trailing vehicle a little after the explosion, Pfc. Terrance Fusek added some levity to the situation.