Troops push on despite heat, loads to carry 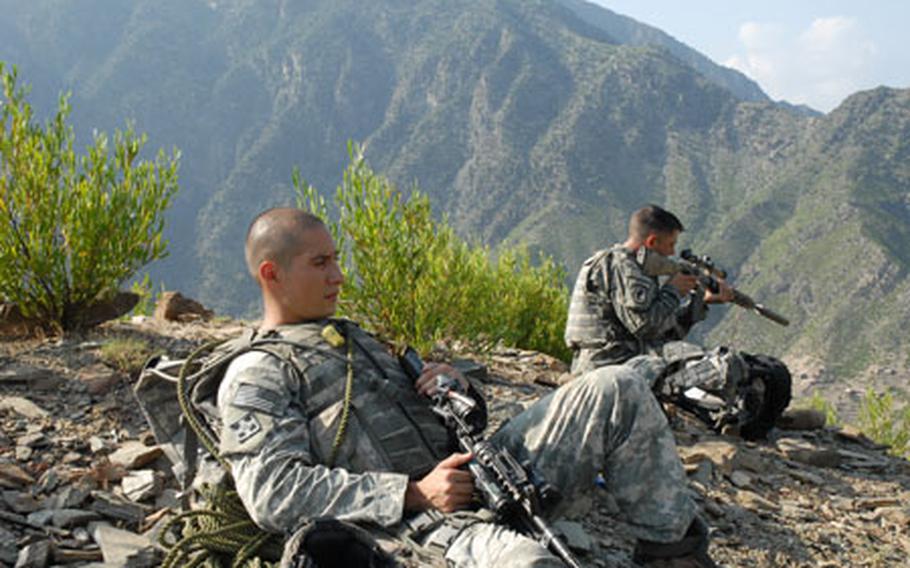 A few days earlier, a Black Hawk helicopter on a resupply mission reported it may have been shot at by rocket-propelled grenade fire from a location near the town of Jalaleh. The helicopter was undamaged.

The Headquarters and Headquarters Troop, 1st Squadron, 91st Cavalry Regiment&#8217;s 20-man reconnaissance platoon has been sent out to investigate where the grenade fire might be coming from.

While the platoon&#8217;s sniper-heavy squad patrols the town in Humvees, the recon-heavy squad, led by Staff Sgt. Jonathan Wall, humps the ridgeline nearby, looking for signs of enemy activity, such as fighting positions or RPG nose cones.

It doesn&#8217;t take the squad long to find them. On different levels along the ridgeline, fighting positions have been created, some strewn with food wrappings from Meals, Ready to Eat, others with fantastic views of the road below and the sniper squad passing by in the Humvees.

It&#8217;s a light day compared to what the men are used to: less than five kilometers to walk, and a climb of only 1,000 feet in elevation. Still, an hour into the patrol, every man has sweat through the seat of his pants, and some all the way down to their boots.

Rated to stop a handgun, the body armor the men have been issued provides very little protection from the sniper bullets and RPGs favored by the nearby enemies. And while it can&#8217;t stop a 7.62 mm sniper rifle, the armor can, and does, stop heat from leaving the soldier&#8217;s bodies while putting more weight on their shoulders.

If Wall had his way, he and his men would wear only biblike plate carriers and helmets for protection while walking the mountainsides.

After his second mission, Wall, from Alice, Texas, had one of his combat uniform blouses modified, cutting off the sleeves and having them sewn onto the torso of a moisture-wicking T-shirt. Soon after, the rest of the platoon did the same.

Any efforts the platoon makes to drop weight or modify equipment all have one goal: conserve water. Spc. Andrew Wiswell, the platoon&#8217;s radio and telephone operator, said when he goes out, it&#8217;s usually with at least five liters, and carrying any more than that becomes too heavy.

On one recent mission, one soldier lost so much water, he passed out and needed three pints of fluid to get him going again.

With all his radio equipment, Wiswell, from Sacramento, Calif., has one of the heaviest loads to carry (Wall&#8217;s normal gear weighs 87 pounds). He said that though it&#8217;s heavy, the only thing that stops him and the rest of the platoon men from going further and giving both the soldiers and civilians in the region better protection is lack of water.

Wiswell walked away with a half-full Camelback after the mission.

After three hours on the ridgeline, Wall and his men came down to meet Humvees waiting below. As the trucks began to roll, one broke down, a constant threat due to uneven, makeshift roads full of switchbacks, boulders and sand up to nine inches deep.

Since the vehicles are up-armored just like the ones in Iraq &#8212; where the road system is much more manageable, though the threat of roadside bombs higher &#8212; the Afghan mountains are wreaking havoc on shocks, tires and undercarriages.

Then believe that patrolling mountains is working &#8212; that enemies seeing sniper rifles in the hands of young soldiers trained and ready to use them causes them to run.

Where Fire Base Naray, where the men call home, used to be rocketed at least once a week when they first arrived, now it&#8217;s more like once a month.

The unit that the 1-91 replaced never went up into the mountains, Wiswell said. The fact that the American soldiers, with all their gear in tow, are walking high in the hills astonishes the friendly Afghan soldiers and police, Wiswell added.