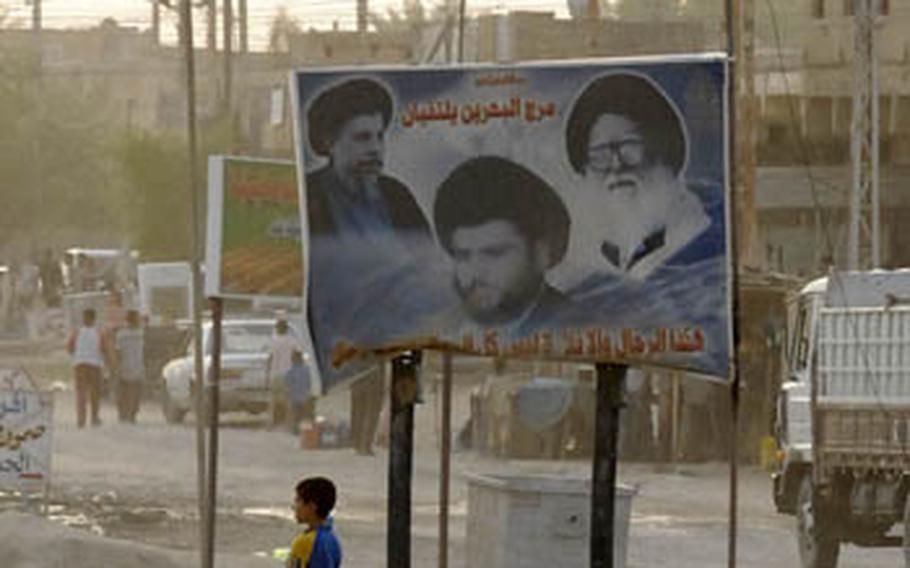 A young boy in Hussaniyah stands under a billboard of prominent Mahdi Army figures. U.S. troops in the city said they haven’t had direct confrontation with the group in recent months, but know it stills has a strong presence in the city. (Leo Shane III / S&S)

On the east side of the highway are densely populated urban areas, packed with Shiite residents still loyal to the Mahdi Army. On the west side are rural farms, mostly held by Sunni landowners and tribal sheiks.

The east side is home to most of the region&#8217;s police stations and government offices, including the local government courthouse. The courthouse had to be relocated adjacent to the highway from its old location deep inside Hussaniyah, U.S. forces said, because residents from the west side feared traveling inside the city.

The west side boasts more than 800 "Sons of Iraq" at dozens of security checkpoints. The east side has no members of the predominantly Sunni group.

But Lt. Col. Richard Wilson, whose 1st Battalion, 27th Infantry Division troops patrol both halves of the region, said the goal is the same on either side: Promote redevelopment, build trust in the central government, and prevent a return to the cross-highway sectarian violence of just a year ago.

"We&#8217;re working with them on essential services, microgrants, things like that," he said. "You can&#8217;t really approach it differently."

Still on a day-to-day basis, life on opposite sides of the highway can be very different for the battalion. Capt. Lucas Yoho&#8217;s Company A patrols the east side almost daily, spending much of its time among the 500,000 residents of Hussaniyah.

Billboards of Muqtada al-Sadr and other Mahdi Army leaders still stand along the main routes in town, and al-Sadr still has an office in the center of town. Yoho said rather than tear down the pictures, coalition forces have spent time making friends with local business owners and talking up the central government &#8212; tactics he sees as more effective.

Still, direct confrontations in the city are rare, and grant programs backed by the U.S. and Iraqi government have become popular with many business owners, Yoho said.

Over on the west side, Company B&#8217;s biggest headaches aren&#8217;t challenges to their presence but fights between the locals and official government representatives. On Monday night, Iraqi army soldiers arrested six neighborhood residents and two "Sons of Iraq" members, the fourth time in recent months they&#8217;ve done such a raid without informing U.S. forces.

Spc. Jared Gabriel spent much of the afternoon trying to calm down Sheik Amad Abasalm Mohammed, who said his "Sons of Iraq" members were on the verge of quitting.

Without taking sides, Gabriel told Mohammed that U.S. officials were looking into the matter. Troops tried to encourage Mohammed to work with area police, but acknowledged that both sides don&#8217;t trust each other right now.