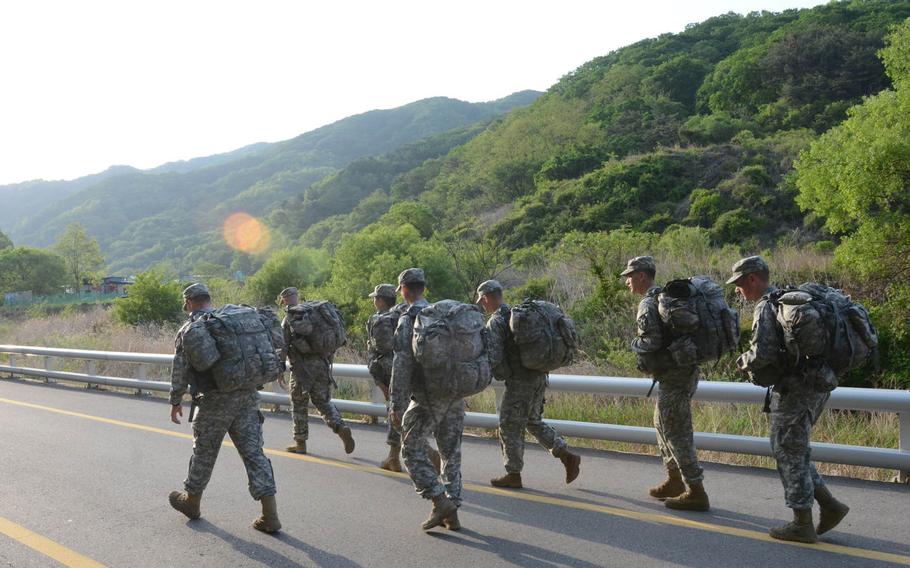 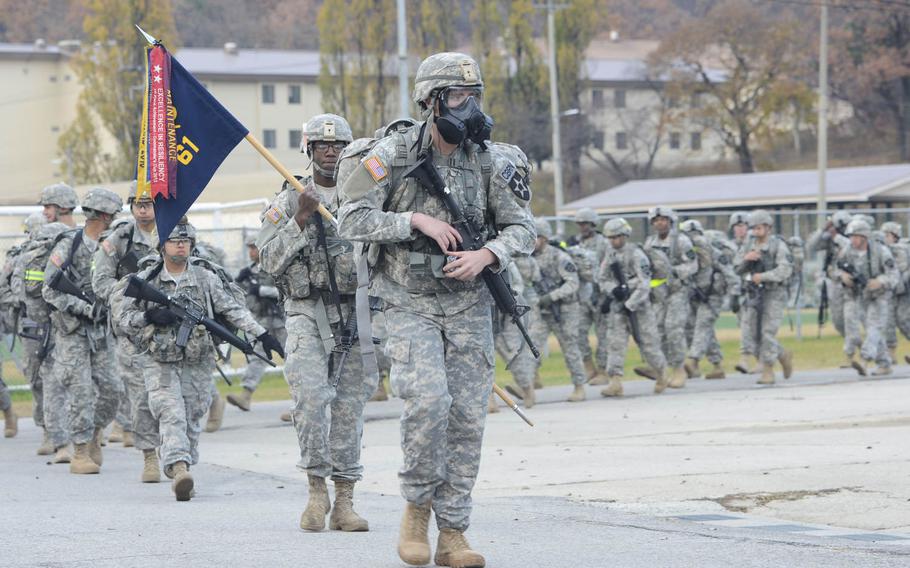 SEOUL, South Korea — Generations of soldiers have set off on this test of physical and mental endurance armed with what will be their most potent weapons: sturdy, broken-in boots and several pairs of thick socks.

On Wednesday, the decades-old tradition will come to an end when the 2nd Infantry Division’s 2nd Battalion, 9th Infantry Regiment hosts its final Manchu Mile in South Korea as the unit prepares to inactivate.

“I think bittersweet is a good word to use,” Commander Lt. Col. Scott Knight said. “It’s the last one we’re doing on the peninsula. It’s in conjunction with our inactivation. It’s a lot of goodbyes that are involved, so it’s an awesome experience to go out on a high note.”

The 25-mile march with backpacks is held twice each year to commemorate the unit’s 85-mile march in China during the Boxer Rebellion in 1900. The 2-9 will inactivate in July as part of a move toward increased use of U.S. rotational forces on the peninsula.

In the weeks before Manchu Mile, soldiers take part in increasingly long ruck marches of up to 12 miles to get their bodies and feet in shape. On the morning before they set off, soldiers are told to relax and make sure they’re stretched out.

To take advantage of the cooler nighttime temperatures and lessen the risk of heat illness, the march starts around 3 p.m., with groups leaving at 20- to 30-minute intervals. They walk slowly through the night and take several rest stops.

In all, they’ll march for about nine hours across mixed terrain, from hilly ridgelines to a mostly flat 10-mile stretch alongside the Sincheon River.

The first group crosses the finish line around 1 a.m., where the traditional post-march meal of steak and eggs is served. Medics are on hand to treat blisters, and soldiers are presented with the coveted Manchu belt buckle featuring the regiment’s dragon insignia. The final group arrives around 6 a.m.

“People come out of here with a sense of accomplishment, a sense of pride, really understanding what they’re capable of,” Knight said. “Surprisingly few people fall out of the event because there’s so much pride involved in it.”

Only 10 of 800 soldiers who took part in the last Manchu Mile failed to finish, he said. Some 1,200 participants will take part in next week’s march, which has been opened up to participants outside the regiment, including members of sister battalions and Korean veterans, to commemorate the final version on the peninsula.

“Everybody’s pretty energetic when we start,” he said. “After about mile eight, the reality of the march sets in. You start looking left and right and you start relying on your buddy to stay motivated. You have to look deep within yourself.”

Completing the march is such a milestone for some participants that they keep re-enacting it years after they leave South Korea. Cobb said 2-9 veterans in the U.S., many in their 50s and 60s, stay updated on the unit’s marches via social media and meet up to conduct their own.

“Guys from the ‘60s and ‘70s are always talking about their belt buckles and how many they’ve earned,” he said, noting that the Manchu Mile belt buckle is the only one that soldiers are authorized to wear while in uniform.

The best part of the event is being outside with your whole company and closest friends, Pfc. Robert Russell said.

“You’re playing music and having a good time. It’s just a real good atmosphere,” he said. “Once it’s completed, it’s a lot of fun and you’re ready to do another one.”

Sgt. Robert Llobrera said Dr. Scholl’s shoe inserts and pre-march meals of pasta helped him complete two Manchu Miles. He said the marches have helped hone his leadership skills by forcing him to make sure his soldiers stay hydrated and motivated.

When their energy starts to wane, he encourages them with the battalion motto: “Keep up the fire.”