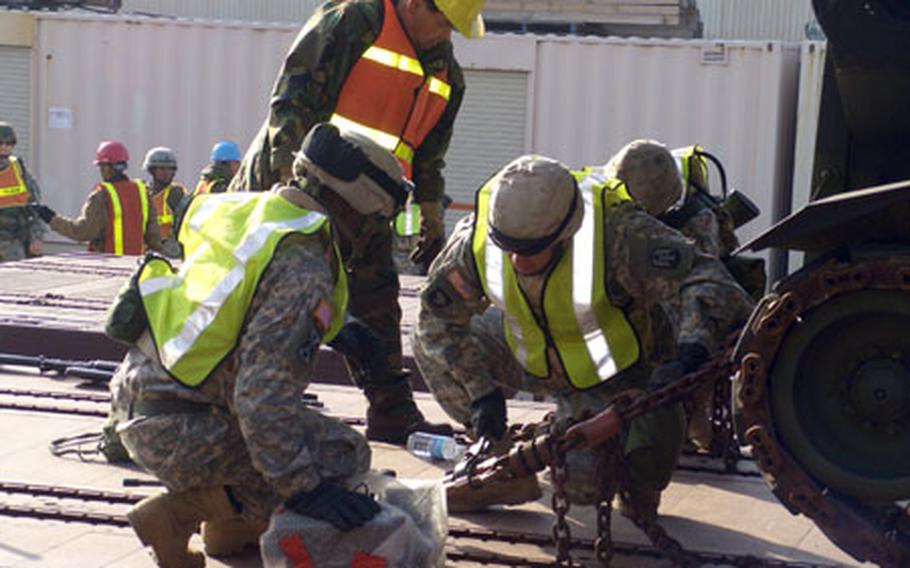 Earlier this week at Camp Carroll, South Korea, soldiers with Task Force Black Horse ready combat vehicles for transport to a training range where they were to use them in a live-fire exercise. The Task Force consists of soldiers from the 2nd Squadron, 11th Cavalry Regiment at Fort Irwin, Calif., and Battery B, 2nd Battalion, 5th Field Artillery, at Fort Sill, Okla. They were in South Korea taking part in the annual Reception, Staging, Onward Movement and Integration exercise. (Photo courtesy of the U.S. Army)

It was the first time in four years that the U.S. Army practiced the equipment draw.

The exercise saw a squadron-sized armored cavalry task force pieced together from several U.S.-based units draw M1A1 Abrams tanks, M2A2 Bradley fighting vehicles, Humvees and a variety of other vehicles from Camp Carroll and ready them for use in live-fire combat exercises.

The drill, which started Monday, was part of the annual U.S.-South Korean military exercise called Reception, Staging, Onward Movement and Integration under way throughout the peninsula.

Troops drew the vehicles from a set of warehouses at the Army&#8217;s Materiel Support Center-Korea (MSC-K) where pre-positioned stocks of combat vehicles for a brigade-sized unit are kept ready with other equipment.

Once troops drive the vehicles from the warehouses, they begin a series of maintenance checks. If deficiencies turn up, the vehicle&#8217;s crew works with mechanics from the field support battalion to fix them as quickly as possible, Rogers said.

After the draw, the vehicles were slated for transport by train and truck to Camp Casey in Dongducheon, and from there to Rodriguez Range, said Gee Jeon, MSC-K&#8217;s chief of transportation.

This year&#8217;s drill marks the first deployment in South Korea of a new means the Army developed for maintaining combat equipment on the battlefield &#8212; a mobile repair shop called the Forward Repair System.

The system is a self-enclosed shelter that can be hauled by truck and is equipped with a wide array of tools that enable mechanics to carry out big maintenance tasks far from a regular maintenance depot.

The training enables the support battalion to &#8220;validate that yes, we can issue equipment and can do our wartime mission if required,&#8221; Rogers said.

And the task force gets &#8220;to see how things are done in another theater outside&#8221; of the United States, he said.