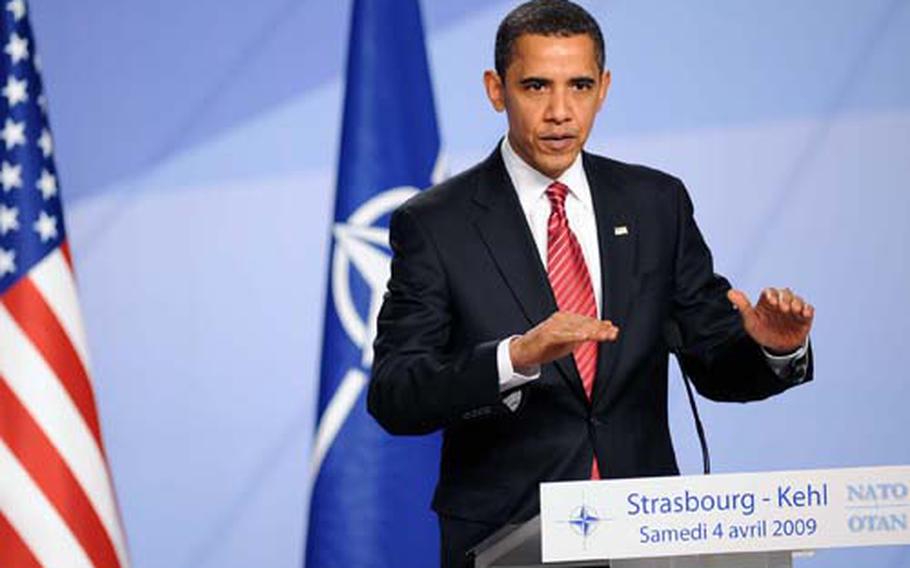 STRASBOURG, France &#8212; Words of support for a new Afghanistan strategy translated into pledges of more NATO troops Saturday at the alliance&#8217;s 60th anniversary summit. But, despite their pleasure with a new U.S. administration and tone, European allies were still hesitant to greatly escalate their involvement in the war.

President Barack Obama arrived to great praise and fanfare on his first European trip, but left the summit without the large-scale troop commitments he sought for a war that leaders have called a stalemate in some areas.

Instead, allies talked largely of police trainers and civilian specialists, pledging 3,000 new troops for limited deployments during Afghanistan&#8217;s August elections. Along with that, alliance members promised 300 new paramilitary trainers, 70 embedded training teams and the creation of a high-level NATO training command, a commitment that could bring the total of new personnel up to 5,000.

Obama claimed a "NATO stamp of approval" for his plan, and said at a Saturday news conference that the troop commitments from NATO show "the promise of its past and the purpose for its future."

Obama acknowledged he wanted more, calling the pledges "a strong down payment" and saying "we&#8217;ll need more resources and a sustained effort."

Germany pledged 600 more troops, but for a limited deployment focused on the elections. Britain offered "several hundred" extra soldiers for help during the same period, but that fell short of pre-summit expectations of up to 2,000 more British combat troops.

Belgium pledged some 60 military trainers, and Spain a dozen more. But the leaders of France and Germany refused Obama&#8217;s direct appeals for more combat troops, offering up trainers instead.

Both French President Nicolas Sarkozy and German Chancellor Angela Merkel spoke repeatedly of "Afghanization," a mantra that analysts here said was meant to warn against "Americanization" of the Afghan war effort.

And though the public statements were largely glowing, privately, it was a different story.

"I genuinely thought we would get more," said a senior U.S. official while on a break outside the main meeting room on Saturday. "Disappointing" was how the official summed up the summit.

Canadian officials &#8212; speaking on condition of anonymity to avoid ruffling allies&#8217; feathers &#8212; expressed similar disappointment after their long commitments in the south. And while they believe the Canadian public continues to back their forces&#8217; direct combat roles, fatigue and opposition could set in as casualties mount and the war escalates, they said.

Observers at the summit noted that European leaders were seeking to show their commitment and support for Obama, but not pledge so many troops that they would anger their own populations.

"We totally endorse and support America&#8217;s new strategy in Afghanistan," Sarkozy said at a joint news conference with Obama on Friday at the Palais des Rohan. But, he said, there will be no extra French combat troop commitment, as "France&#8217;s troop increase was taken last year."

It was a caveat often repeated by other NATO leaders reluctant to pledge combat troops to the mission.

"We are not waging a war, we are helping to rebuild," Sarkozy said Friday. And on Saturday, he said "NATO is an organization for peace. It is not a war organization, but a peace organization."

Merkel repeatedly noted that Germany&#8217;s contributions were not combat troops, but trainers and development officials.

"We need benchmarks. We need very clear targets to achieve," she said, suggesting a review of those benchmarks every six months, "so as not to close our eyes to reality."

Obama spent the weekend selling the Afghan war strategy to allies by saying it was more likely that al-Qaida would attack in Europe than in the United States. And he was careful to try to temper European worries about his goals in the war.

"We have no interest in occupying Afghanistan. We have more than enough to do in rebuilding America. But this is a mission that tests whether nations can come together," Obama said Friday. "Just because it is difficult, it does not absolve us from trying."

Obama and the other leaders made frequent &#8212; and sometimes direct &#8212; comparisons to the previous U.S. administration and its reputation for "going it alone" in international affairs.

"Nowhere have we seen more suspicion than we have in questions over war and peace, and how we respond to terrorism," Obama said.

It is important for Europe to understand that, "Even though George Bush is no longer president, al-Qaida is still a threat. And we cannot pretend somehow that because Barack Hussein Obama got elected president, everything&#8217;s going to be OK," he said Friday.

Issues like Abu Ghraib and the Guantanamo detention center should not give Europe "excuses not to participate in these joint efforts," he said at another point.

The setting of the summit couldn&#8217;t have been more different than the rugged mountains and sand-choked expanses of Afghanistan, where the actual fight is taking place.