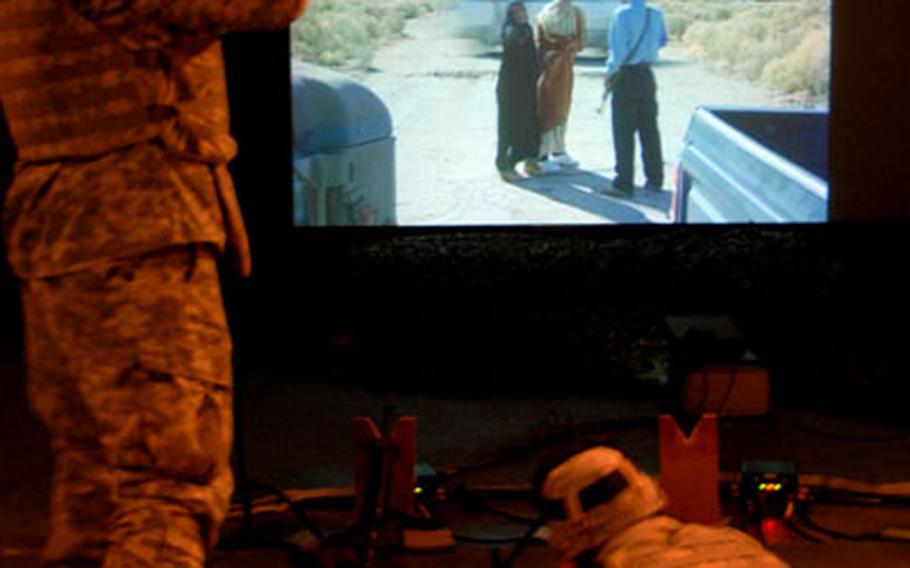 Pfc. Jeremy Elzy (standing), 25, of Louisville, Ky., and Spc. Philip Gerbin, 28, of Palmer, Alaska, both with the 297th Infantry Brigade of the Alaska Army National Guard, go through a shoot/don’t-shoot scenario at Camp Buehring, Kuwait, in which Iraqis are complaining about a road closure. Later in the scenario, an insurgent hides behind a van and shoots a rocket-propelled grenade at the U.S. convoy. (Megan McCloskey / S&S)

Pfc. Jeremy Elzy (standing), 25, of Louisville, Ky., and Spc. Philip Gerbin, 28, of Palmer, Alaska, both with the 297th Infantry Brigade of the Alaska Army National Guard, go through a shoot/don’t-shoot scenario at Camp Buehring, Kuwait, in which Iraqis are complaining about a road closure. Later in the scenario, an insurgent hides behind a van and shoots a rocket-propelled grenade at the U.S. convoy. (Megan McCloskey / S&S) 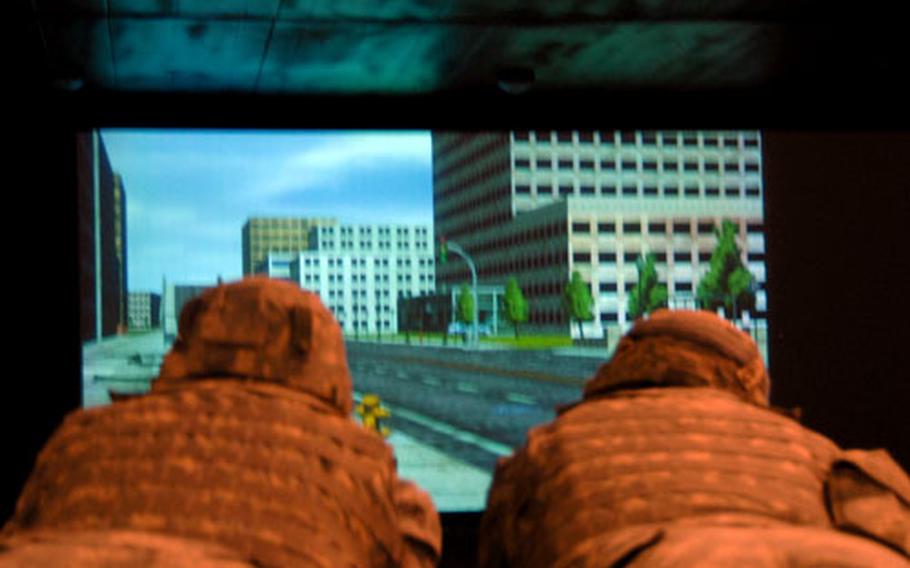 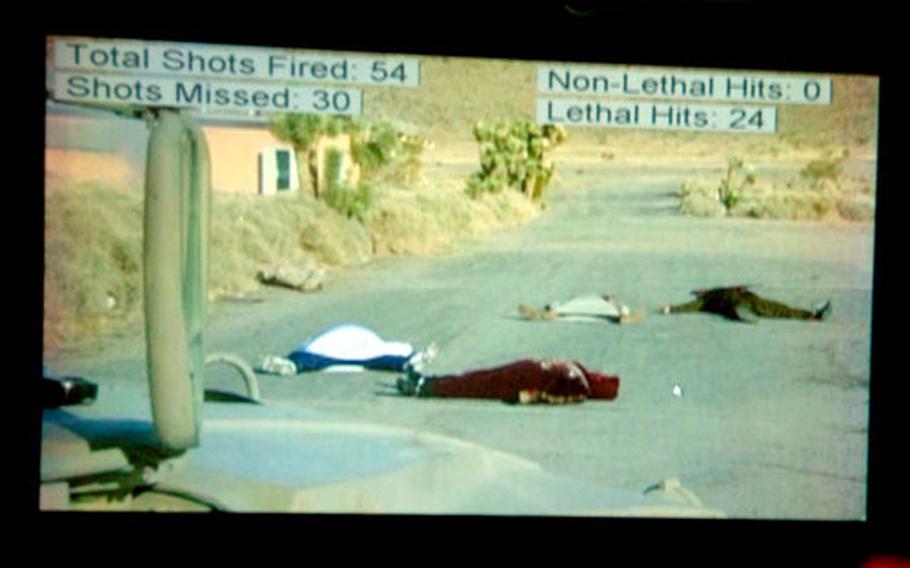 CAMP BUEHRING, Kuwait &#8212; One of the most requested training scenarios for troops in their last weeks before going to Iraq revolves around a key question faced in an environment where it&#8217;s often unclear who&#8217;s the good guy and who&#8217;s the bad guy: Shoot or don&#8217;t shoot?

At Camp Buehring, where many units spend a couple of weeks just before heading into Iraq, troops can play out engagement scenarios on what amounts to a giant video game, albeit one that ultimately has real-world consequences.

&#8220;They get a chance to polish their skills and get in the right mind-set before heading up north,&#8221; said Army Capt. Ken Smith, operations officer for the Kuwait Armed Forces training center at Buehring.

The Engagement Skills Trainer is a laser-guided, computer-feedback system that allows servicemembers to shoot at either a computer-generated or filmed engagement scenario that unfolds on a large screen in front of them. The laser is precise enough to tell whether the shot hits anybody, and if so, whether it is a lethal hit to the vital organs or a nonlethal hit to a limb.

As the conflict in Iraq evolved, the Army started filming role players acting out scenarios typical of what troops were seeing downrange. Each of the 28 shoot/don&#8217;t shoot scenarios is meant to help troops decide in the field whether the situation requires force.

At the beginning of each shoot/don&#8217;t shoot scenario, a voiceover gives an intel briefing.

In one scenario, a convoy encounters what appears to be a wounded local on the ground surrounded by others. Another has a dismounted patrol going into a building that the intel brief said is used by insurgents as an operations staging base. In all of them, the perspective of the camera is from the soldier&#8217;s point of view.

Junior level troops are making key decisions on patrols and during other missions that have consequences beyond that initial moment, he said. The scenarios open the door to discussion, a key topic being, &#8220;why did we do it this way?&#8221; Smith said.

Pfc. Jeremy Elzy, 25, who is deployed at Camp Buehring with the 297th Infantry Brigade of the Alaska Army National Guard, completed a shoot/don&#8217;t shoot scenario for the first time last week. He said he thought the scenarios were realistic and a good way of learning how to deal with situations concerning civilians.

Mostly, troops will practice on the trainer as a squad, which in addition to developing individual skills, helps the leader hone his skills for controlling the unit&#8217;s fire, Smith said.

The system is continually being tailored to the needs in Iraq. A couple of weeks ago, the vehicle weapons were put on mounts to better replicate what it&#8217;s like to fire from a Humvee, for example. Smith said the change was in response to leaders who noticed the troops needed more practice engaging from vehicles.