Troops on trail of insurgents get little help from villagers 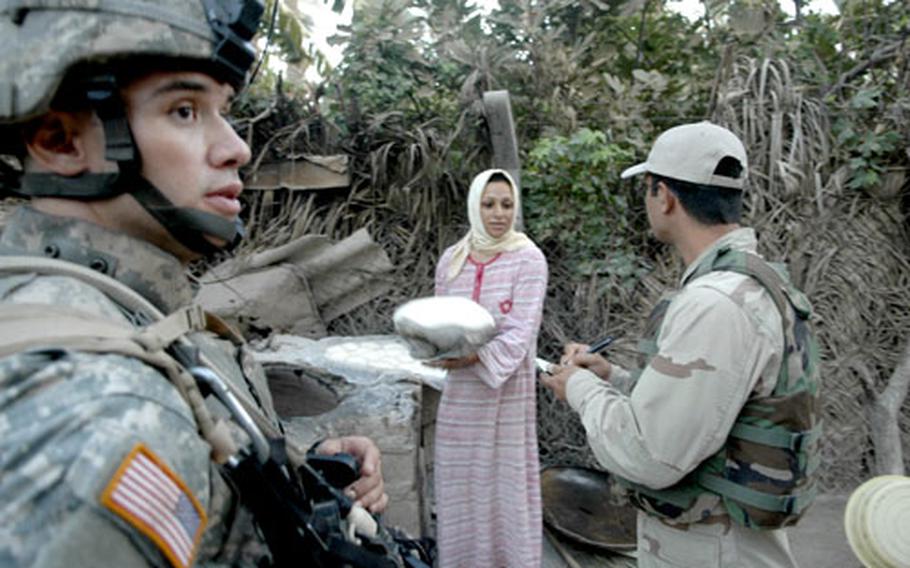 First Lt. Dave Smart and his Iraqi interpreter question an Arab woman Wednesday as she bakes bread outside her home in a small village south of Baghdad. (Monte Morin / S&S) 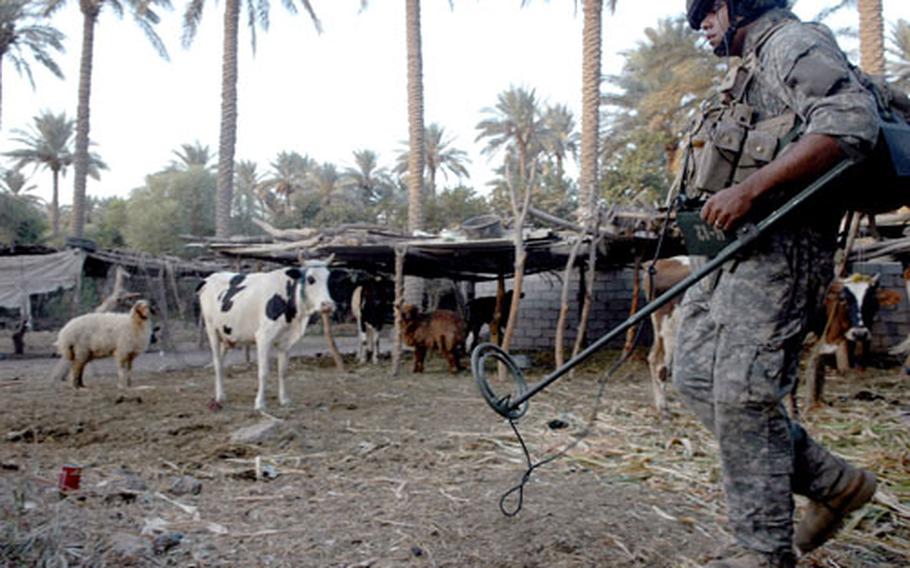 Spc. Sean Brown, 22, of Greensboro, Md., uses a metal detector to sweep for hidden weapons during a reconnaissance mission in a small village south of Baghdad. (Monte Morin / S&S) 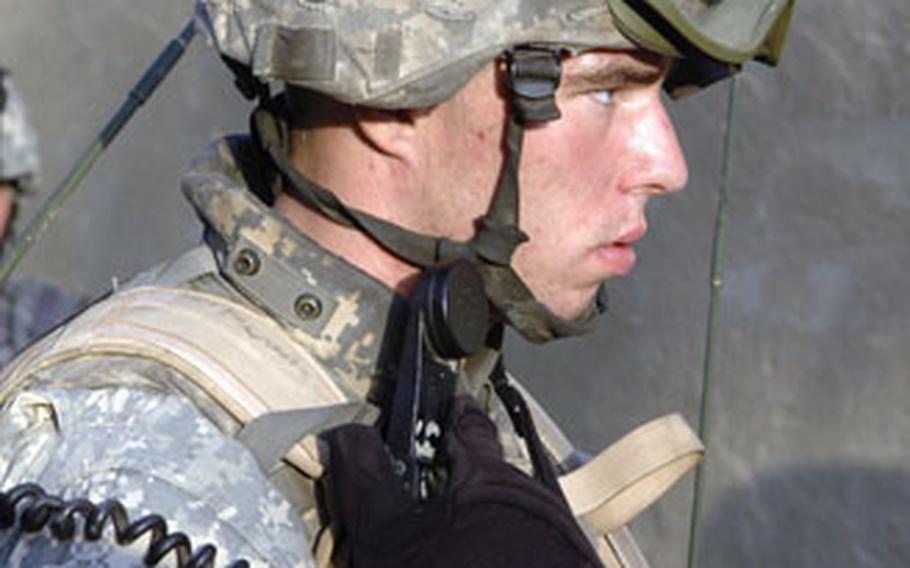 FORWARD OPERATING BASE FALCON, Iraq &#8212; It was a tough sell for 1st Lt. Dave Smart.

The 25-year-old Oak Lawn, Ill., native had just spent the last three hours driving and then hiking into his squadron&#8217;s most hostile area of operations Wednesday. Once he arrived, he had to attempt to enlist the cooperation of locals in a small, Sunni village just south of Baghdad.

Smart&#8217;s platoon had taken a circuitous route to get to the village as a way of guarding against attacks from roadside bombs &#8212; weapons that have taken a heavy toll on his unit, the &#8220;Buffalo Soldiers&#8221; of the 1st Squadron, 10th Cavalry Regiment, 2nd Brigade, 4th Infantry Division.

Dismounting from their Humvee gun trucks roughly a mile from the village of Arab Jabour, Smart led the Second Platoon of Troop B on a winding hike through lush farmlands and pastures. As darkness gave way to a smoky purple haze, and the sun began to rise above the Iraqi fields, the soldiers crunched down dirt paths and hopped over small brooks as they closed in on the village.

The village&#8217;s bucolic appearance however belied a dangerous truth. Arab Jabour is believed to be a bedroom community for those insurgent cell leaders who plan, fund and supply attacks in Baghdad &#8212; an area that squadron commander Lt. Col. James Love describes as the &#8220;eastern leg of al-Qaida in Iraq&#8217;s southern belt.&#8221;

The village and surrounding area had seen little U.S. military presence prior to the Buffalo Soldiers&#8217; arrival four months ago. While clashes were frequent in the unit&#8217;s first weeks, Love said they seem to have tapered off since &#8212; an indication, he said, that squadron troops had successfully disrupted the supply and planning lines that run from Arab Jabour to Baghdad.

The commander said there were even signs that residents of the area were fed up with insurgent activities there and had begun informing on their activities through telephone tip lines.

On this particular day though, Smart encountered few tipsters.

As Smart and his soldiers made their way from house to house, the villagers yawned, rubbed sleep from their eyes and gave the platoon leader curt answers when questioned about insurgent activity in the area.

At one home in particular though, one man spoke at length to Smart and his Iraqi interpreter. The conversation was typical of the frustrations U.S. soldiers encounter when trying to get information from local Iraqis.

It began when Smart asked the man if he had seen mortars being launched in the area.

&#8220;It is very scary to be working in the fields with these mortars,&#8221; the man said through an interpreter.

When Smart pressed the man for information, the conversation took a turn.

Smart told the man he was unable to answer for incidents that occurred before his Fort Hood, Texas-based squadron arrived in the area.

The man continued to complain, however.

Smart wrapped up the conversation as best he could.