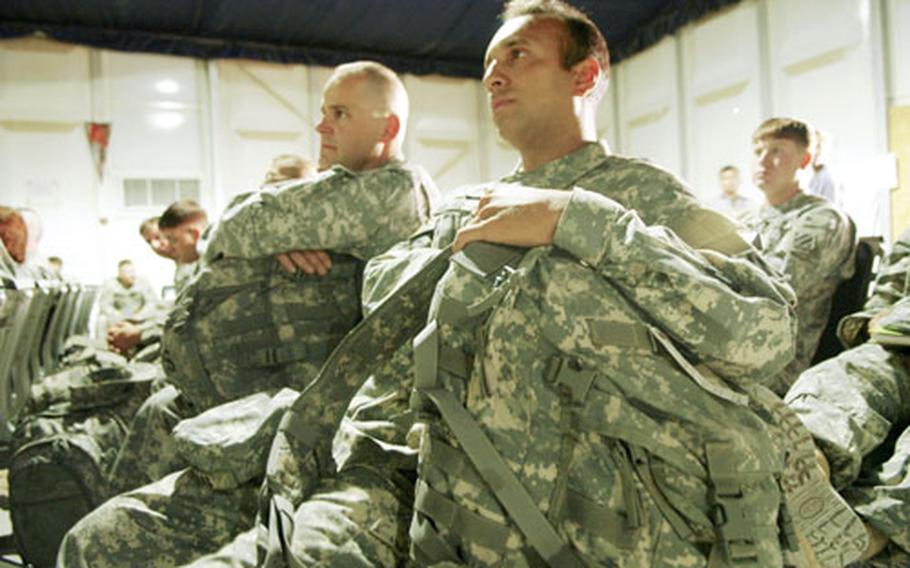 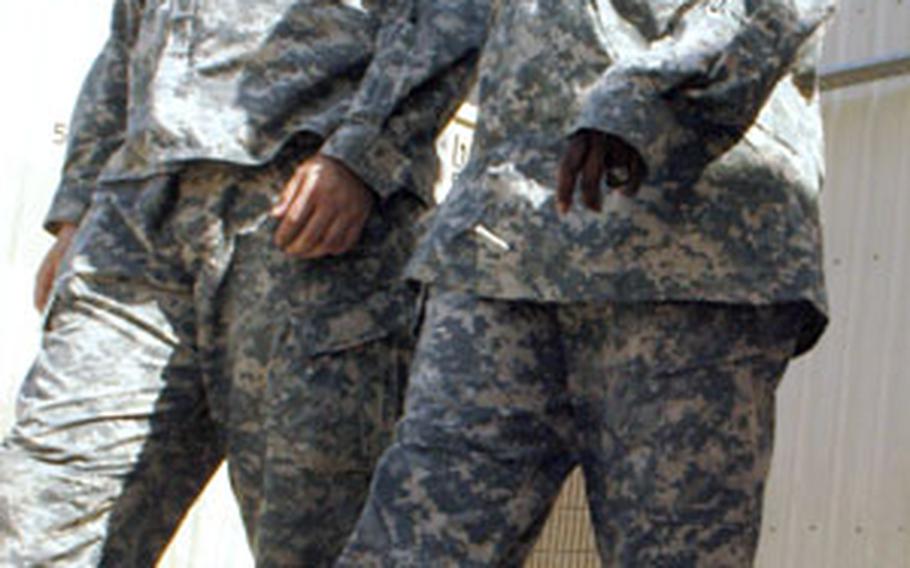 Kuwait-based 1st Sustainment Command (Theater) Spc. Darin Rummel, left, and Staff Sgt. Yetta Stewart are both using their deployment leave to travel to a foreign county. Rummel is headed to Australia, while Stewart is going to England. (Allison Batdorff / S&S)

Not everyone leaving the Middle East on Thursday planned to spend their mid-war break at home, as attested to by the itineraries of troops waiting to go through customs.

He works at Kuwait&#8217;s 1st Sustainment Command (Theater) Gateway where soldiers get their international travel tickets. Those who are using the time to travel are usually multiple deployers, said the 26-year-old from Philadelphia.

Soldiers are eligible for 15 days leave on a 12-month tour; 18 days on the extended 15-month tour. The military provides a round trip to a destination of the soldier&#8217;s choice.

He&#8217;s hoping an Army friend can meet him there, he said, but he may be flying solo as all leave is coordinated through the individual&#8217;s command.

His mother is a little upset with him, admitted the 21-year-old from Olin, Iowa, but, he said, she knows this is a good opportunity.

They usually spend about eight hours there &#8212; getting flights, checking their body armor and going through customs, he said.

Last year, 460,000 soldiers from Iraq and Afghanistan went through the gateway, said Commander Lt. Col. Bobbi Riddle, 47, of Montgomery, Ala.

But for Maj. Marianne Miller, getting from Kuwait to her family in Fairbanks, Alaska, requires a lot of flying time.

&#8220;My plans have gotten mixed reviews,&#8221; said Miller, 37, the support operations planner for 640th Sustainment Brigade. Her friends worry about her traveling alone, but she isn&#8217;t concerned.

Staff Sgt. Yetta Stewart of the 1st Sustainment Command (Theater) and Lt. Col. John Randolph Duke, commander of Task Force Gator, are getting the best of both worlds &#8212; their loved ones are meeting them in a new country.

Granted, only the soldier flies for free, so significant others, friends and relatives are on their own. The soldier also picks up the tab for lodging and all other travel costs.

The trick is to balance reconnection with relaxation, said Duke, who is meeting his wife in the U.K. to tour London and Scotland.

The Army also has a four-day pass program; but soldiers don&#8217;t get to choose where they go. If selected, they go to Qatar.