Troops on R&R are priority at Edelweiss Lodge Army Maj. Andy Pollock of San Antonio and with the staff judge advocate office for the 21st Theater Support Command in Kaiserslautern, Germany, goes over his room reservation with front desk attendant Courtney Dunlap on Wednesday at the Edelweiss Lodge and Resort in Garmisch, Germany. (Charlie Coon / S&S) 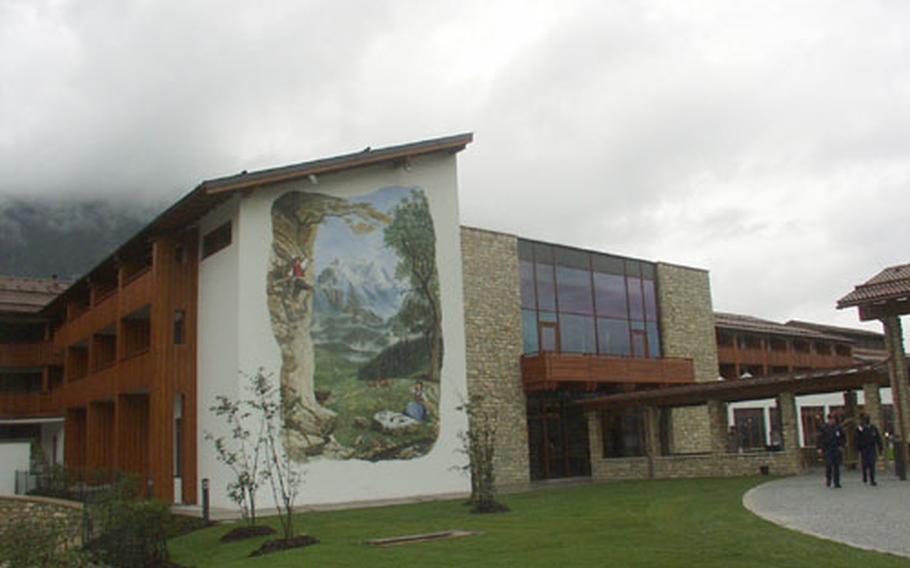 Buy Photo
The exterior of the Edelweiss Lodge in Garmisch, Germany, is adorned with three murals that tell the story of the Edelweiss flower, which in the Bavarian Alps is known as a legendary elixir of love. (Stars and Stripes)

GARMISCH, Germany &#8212; The new Edelweiss Lodge opened Wednesday and was quickly used by vacationers, conventioneers and others connected with the U.S. Department of Defense.

But operators of the $80 million resort in the Bavarian Alps pledged unwavering support for another set of customers &#8212; troops returning from Iraq and Afghanistan and ones on rest and recuperation leave.

&#8220;We serve all facets of military travelers,&#8221; said Christopher Forbes, an Edelweiss spokesman. &#8220;But our main focus is on family leisure travel, especially for junior enlisted troops.

&#8220;We do not have a [separate] mission for distinguished visitors or special quarters or accommodations for them.&#8221;

A number of rank-and-file servicemembers were able to book rooms at Edelweiss for the opening week.

Army Chaplain (Capt.) Richard Garbey of the 7th Corps Support Battalion in Bamberg, Germany, who was helping host a &#8220;single soldiers&#8221; retreat at Edelweiss, said the hotel should &#8220;roll out the red carpet&#8221; for troops returning from deployment.

Garbey noted that since October 2003, the nearby Von Steuben Hotel was used exclusively for troops on leave.

Garbey said he knew of a soldier in Bamberg on R&R leave who was unable to book a room this week at Edelweiss. Forbes, the Edelweiss spokesman, said the soldier must not have identified himself as being on leave or else Edelweiss would have made room for him.

Sgt. 1st Class Richard Strong of 1st Squadron, 4th Cavalry Regiment, 1st Infantry Division, in Schweinfurt, was on R&R leave from Iraq and was able to get a room at Edelweiss.

He hoped to make the most of it.

Retired Army 1st Sgt. Chuck Elkins said he was flown to Hawaii for five days of R&R when he was serving in Vietnam.

On Wednesday, Elkins, who was visiting Edelweiss with his wife, said he hoped to meet some troops on R&R from Iraq or Afghanistan.

The Army used a 30-year, $80 million note to build Edelweiss, which is located behind the George C. Marshall Center. The Zugspitze, the highest peak in Germany at nearly 10,000 feet above sea level, is one of many scenic backdrops.

&#8226; One sponsor can reserve up to three rooms at a time, thus enabling one Department of Defense ID card holder to host three rooms of people at Edelweiss.&#8226; Edelweiss policy is to never turn down servicemembers on rest and recuperation leave or block leave. If no rooms are available, management will ask other guests, starting with conventioneers, to vacate their rooms for the R&R or block leave troops, according to Edelweiss spokesman Christopher Forbes.&#8226; Rooms are cheaper for people of lower rank.&#8226; Information: civilian (+49) (0)8821-9440; www.edelweisslodgeandresort.com