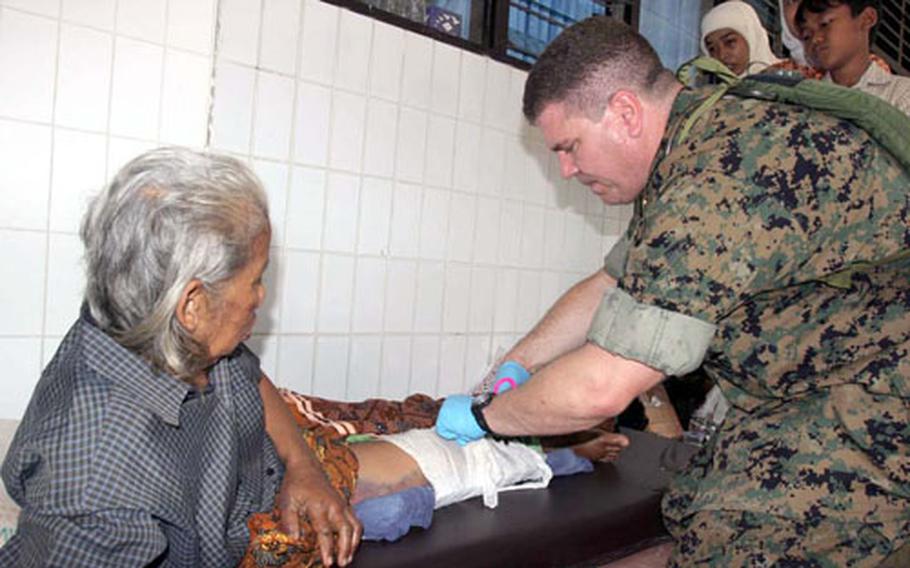 Lt. Cmdr. Carlos Godinez Jr., a III Marine Expeditionary Force surgeon, applies a makeshift splint to the broken leg of Sudi Utomo in Bantul, Indonesia. Utomo was injured when a wooden beam fell on her during the 6.3-magnitude earthquake that struck near the ancient city of Yogyakarta on May 27. (Warren Peace / U.S. Marine Corps)

CAMP FOSTER, Okinawa &#8212; Okinawa-based Marines and sailors are nearing the end of their humanitarian relief efforts in Indonesia after the May 27 earthquake that killed more than 5,800 people.

&#8220;There are amazing stories wherever you look &#8212; a young mother was found outside a hospital laying a filthy mattress with a tube in her chest draining fluid into a bottle,&#8221; said Marine 1st Lt. Eric Tausch during a telephone interview from the village of Sewon, on the island of Java.

&#8220;She&#8217;d been there for two days and the local doctors were simply overwhelmed. One of our surgeons, Lt. Cmdr. Carlos Godinez Jr., was able to operate on her and relieve what was becoming a life-threatening injury.&#8221;

He said tetanus has become a problem in the hot and humid climate where some people in more remote areas have had their injuries untreated for several days.

Tausch said he has been humbled by his experience.

&#8220;The courage of the local people has been absolutely amazing to witness,&#8221; he said. &#8220;They&#8217;ve been through hell, lost nearly everything, and they&#8217;re sleeping outside in what used to be their front yards. Yet, you see them walk into the clinic, some of them suffering with ghastly wounds, and they all have smiles on their faces.&#8221;

Tausch said the medical team was looking forward to returning to Okinawa soon. The Indonesia government has announced that it will transition this weekend from the emergency phase of the relief operation to the recovery phase.

Since the relief effort began, KC-130s from Marine Aerial Refueler Transport Squadron 152, based at Marine Corps Air Station Futenma on Okinawa, have flown 52 sorties in support of the ever-changing operation.