Troops often don’t vote, cite obstacles and skepticism their ballots will be counted 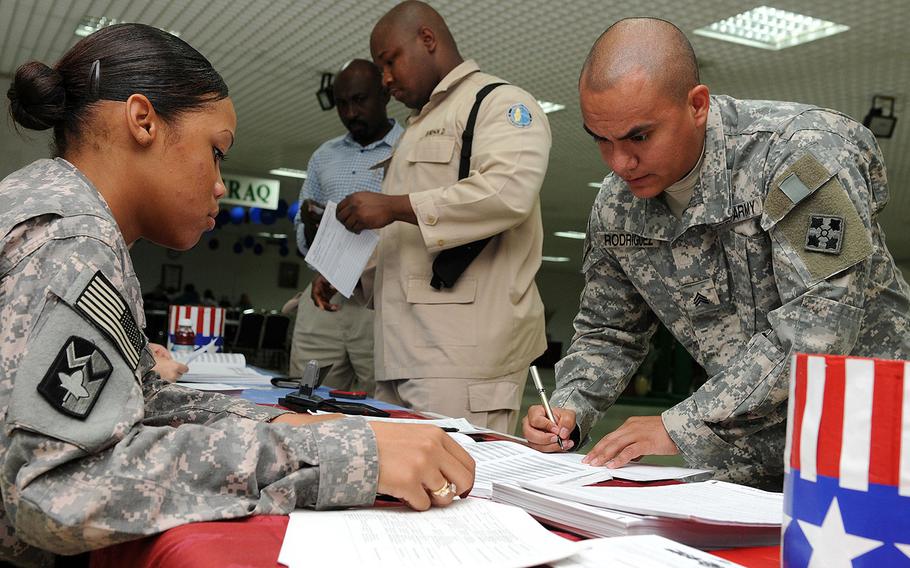 VICENZA, Italy — Military voters can vote early. They can also vote often. Yet many don’t vote at all.

A variety of factors, including age, gender, education, marital status, mobility and complexity of the voting process all influence voting behavior, experts say, and tend to make those serving their country — particularly young, enlisted men posted overseas — among the least likely to vote.

“Historically, male and younger voters participate at lower rates than female and older voters, which can drive down the overall voter participation rates of the military,” which is predominantly male and younger, according to a 2014 report to Congress by the Federal Voting Assistance Program.

The program, part of the Defense Department, is tasked with providing troops, their eligible family members and overseas citizens with knowledge and tools to vote, no matter where they’re stationed. It also conducts post-election surveys of active-duty servicemembers.

“Research shows that the military and civilian populations are significantly dissimilar regarding two additional characteristics,” the report said: “education and mobility.”

Older people and those who feel a part of their community “become acculturated” to voting, said Michael McDonald, an associate professor of political science at the University of Florida who is an expert on voter research. They also start “rooting for their own team.”

Servicemembers, however, may not feel connected to their communities; they move frequently. Some 75 percent are eligible to vote absentee because they’re stationed away from their voting district in the U.S. or overseas.

The main determinants for whether a person votes are interest in the election, conviction that the voter’s choice matters and “if they see an important difference between the candidates and their policies,” McDonald said.

In 2012, 52 percent of active-duty military members voted, according to the FVAP, compared with 58 percent of eligible U.S. civilians counted by the United States Election Project.

The rate of military voting in the 2008 election is unclear because updated analyses since that ballot make comparisons difficult, FVAP said. But according to national data, turnout among young voters in 2008, when Obama was running for his first term against John McCain, was significantly higher than in 2012.

A 2014 survey indicated that 67 percent of military personnel were not confident that their ballot would be counted during the election.

“We believe the lack of voter confidence stems from the myth that absentee ballots are only considered/counted in close elections,” said Katherine Roddy, a spokeswoman for the FVAP, in an email.

Whatever the voting rate, experts believe that the sometimes confusing process of voting absentee, particularly when overseas, which lengthens mail delivery times, lowers rates for military and overseas voters.

“The absentee voting system is complex; states and territories have different rules and deadlines for accepting and processing applications and requests,” Roddy said.

Nearly 15 percent of military absentee ballots were deemed undeliverable as addressed in 2012. But that was down from almost 50 percent in 2010, according to FVAP.

To try to make voting easier and more predictable, officials have redesigned websites and how-to guides. They’ve also updated the use of a Federal Post Card Application to register and request a ballot, as well as an emergency write-in ballot, the Federal Write-in Absentee Ballot.

Both forms are available online at sites such as FVAP.gov or overseasvotefoundation.org, where an online assistant walks voters through the process and provides information on each state’s deadlines and process requirements.

It sounds easy, but in some states, to receive a blank ballot, unregistered military and overseas voters have to first send a registration and ballot request via regular mail. All ballot requests in all states require voters to state a legal U.S. voting residence.

In some states, such as Alabama, the completed ballot must be posted with an affidavit signed by two witnesses at least 18 years old, according to the Overseas Vote Foundation website. In contrast, Maine — which has some of the highest voting rates in the nation — allows everything to be mailed, emailed or faxed, and ballot requests can be made online.

“In Maine, they’ll allow a cellphone photo of the ballot,” McDonald said.

“I tell the soldiers that it’s the easiest thing to vote here,” said Willie Chandler, the chief voting assistance officer in Italy, who’s based in Vicenza and votes in Texas. “Even if you’re in Lithuania on an exercise. It’s easy once you know the process.”

There is still time for overseas voters to participate, said Roddy of the Federal Voting Assistance Program. The earliest state deadline for registration and ballot request is Oct. 8, 30 days before the election, though many have later deadlines. “We recommend anyone who hasn’t already submitted their FPCA (Federal Post Card Application), send one in ASAP,” Roddy said.

Chandler said he tells people that if they haven’t received their requested ballots 30 days before the election, fill out and mail in the write-in absentee ballot. “Then if you do get the ballot from your state, you vote it and send it.”

Election officials would only count one, Chandler said.