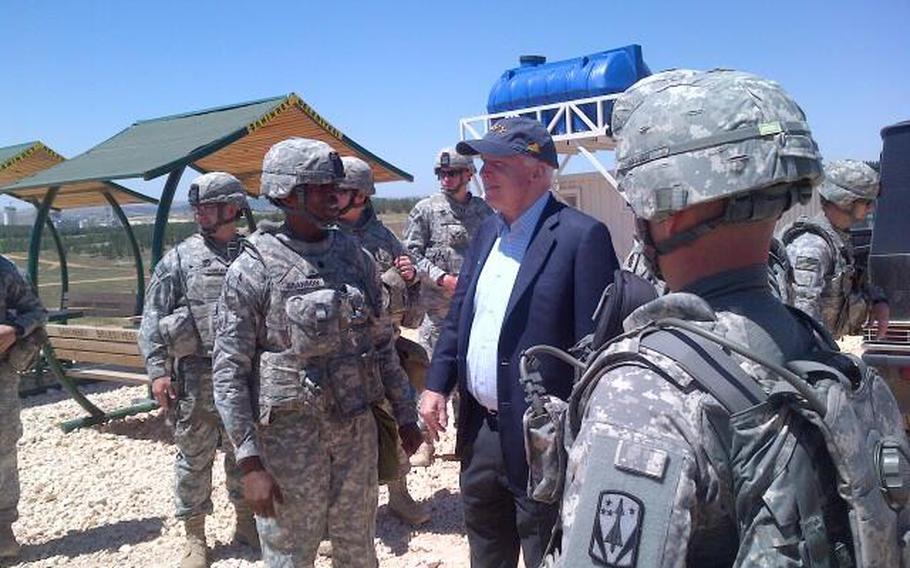 Sen. John McCain, R-Ariz., published a picture on Twitter with U.S. troops in southern Turkey at a Patriot missile location May 27, 2013. During his trip to the region McCain slipped into Syria for a meeting with rebels. (Courtesy John McCain/Twitter)

Sen. John McCain, R-Ariz., published a picture on Twitter with U.S. troops in southern Turkey at a Patriot missile location May 27, 2013. During his trip to the region McCain slipped into Syria for a meeting with rebels. (Courtesy John McCain/Twitter) 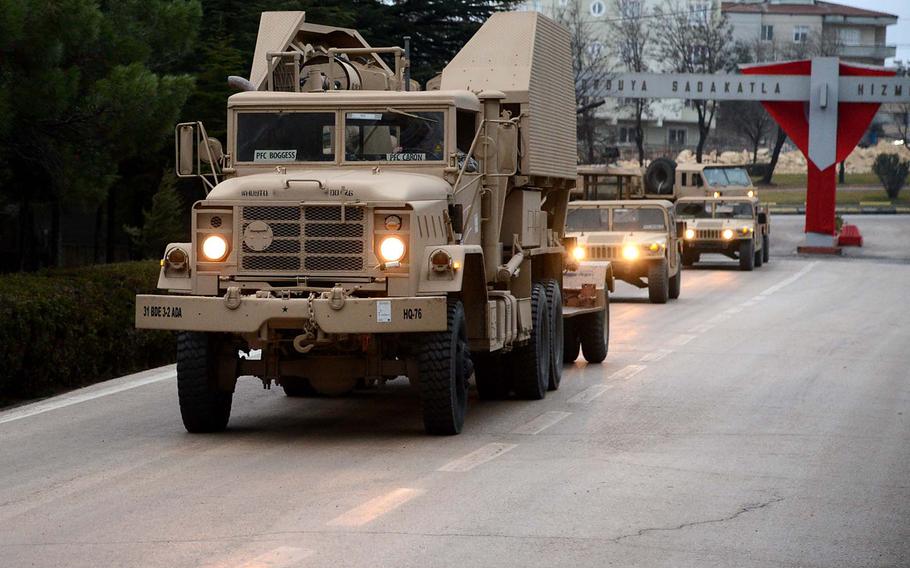 An American Patriot missile battery rolls onto a Turkish army base in Gaziantep in January. NATO deployed six Patriot anti-missile batteries to Turkey's border with Syria as part of an effort to shield its ally from potential strikes from Syria. (Michael Abrams/Stars and Stripes) Soldiers with the 3rd Battalion, 2nd Air Defense Artillery load Patriot missiles onto their launchers at Incirlik Air Base, Turkey, in January. NATO deployed six Patriot anti-missile batteries to Turkey's border with Syria as part of an effort to shield its ally from potential strikes from Syria. (Michael Abrams/Stars and Stripes)

It’s the option in Syria no one seems interested in pursuing.

Not a war-weary American public. Not hawkish Sen. John McCain who is throwing his support behind a no-fly zone. Not President Barrack Obama and his top advisers, who are mulling whether to send lethal military aid to Syrian rebels.

As uncertainty mounts over what to do next in Syria, where questions persist over whether a “red line” has been crossed regarding chemical weapons usage by the regime or anti-regime rebels, all remain leery of direct military engagement in a war in which an estimated 75,000 people have already died.

But some experts suggest that all the talk of potential no-fly zones and other limited military aid distracts from the ultimate underlying issue: If the U.S. and others in the international community want to ensure chemical weapons don’t slip into the wrong hands for use in attacks beyond Syria’s borders, it would likely require thousands of ground troops to secure them.

The reason, Wald said, is that no one on the ground in Syria can be trusted to ensure chemical stockpiles aren’t going to be smuggled or used beyond Syria’s borders — not the Assad regime, not rebel groups and not al-Qaida fighters who have aligned themselves with some of those rebels.

Rather than get drawn into a civil war where neither side is a clear U.S. ally, Wald said, the U.S. and international partners should focus on seizing control of chemical sites and not get bogged down in another conflict.

Still, the international community remains largely focused on whether or not to arm rebels in their fight against the Assad regime. On Monday, the European Union lifted an embargo that could open the door to the shipment of lethal aid to rebels, though EU members remain conflicted over whether such shipments should be carried out. McCain, who made a surprise visit into Syria on Monday to meet with rebels, has repeatedly called on the Obama administration to help arm the fighters.

Yet the question of chemical weapons and how to secure them persists. On Monday, French Foreign Minister Laurent Fabius told reporters more signs have emerged of local chemical weapon use in Syria, but that more verification is required.

One reason the idea of sending in the troops is not gaining traction among U.S. officials and European allies is because such a mission is so complex and difficult, Wald said.

According to the global intelligence consulting firm Stratfor, there is also a general aversion to getting involved in another war in the Islamic world.

“But comprehensively eliminating the chemical weapons threat would involve a large ground operation, which the United States is working to avoid,” Stratfor said in a report earlier this month.

Gen. Martin Dempsey, chairman of the Joint Chiefs of Staff, told a Senate committee in April that securing chemical weapons sites is complicated by the fact that there are numerous weapons caches across the country and the Assad regime keeps moving them. There is no guarantee that ground troops could actually secure the sites, he said.

Because Syria’s weapons sites are believed to be spread out across the country, near dense population centers, striking those sites from the air is not a military option, according to both military and chemical weapons experts. That would risk the killing of civilians.

“We don’t want to bomb sites and have nerve agents poisoning people. There we are, killing Arabs again,” said Raymond A. Zilinskas, director of the Biological Weapons Nonproliferation Program at the Monterey Institute of International Studies.

“Targeting is a very difficult process. The Assad government has strong anti-aircraft capabilities, so are we willing to lose airplanes? Who is sending in the aircraft? Are we dumb enough to try and do this on our own now?”

If the international community wants to seize control of the weapons, ground forces are inevitable, according to Wald. Such action would likely require an international coalition and a U.N. mandate. In addition to a strong no-fly zone, about 50,000 troops, comprising special operations forces, heavy Army units outfitted with tanks and EOD units would be needed in the troop mix, Wald said.

“I think they’re going to have to go in because you can’t let chemical weapons get out,” Wald said. “They (troops) don’t need to be there forever.”

Troops would likely encounter small-arms fire and potentially roadside bombs during such an operation, Wald said.

Other chemical weapons experts caution that much remains unknown about the nature of the stockpiles in Syria and that concerns about those weapons leaking out of the country could be overstated.

“I think it would be a very, very hard thing to do,” said Zilinskas. “Sarin gas is very nasty stuff. You better know what you’re doing if you’re trying to move it.”

Many details remain unknown. Are the weapons stored in big bulk, such as one-ton containers? Are they stored in heavy artillery shells, or bombs? “If it is in a bomb, you’re talking hundreds and hundreds of pounds,” Zilinskas said.

It remains to be seen whether an extremist group interested in moving such weapons has the logistical capability or technical know-how to carry out such a mission or extract the chemical agents from heavy weaponry, he said.

As the civil war in Syria presses on, NATO is in a position to take some action if called upon.

Earlier this year, the alliance deployed six Patriot anti-missile batteries to Turkey’s border with Syria as part of an effort to shield its ally from potential strikes from Syria.

The U.S. also has sent about 200 troops to neighboring Jordan to help partners there prepare for the possible consequences of a regional spillover.

As the international community ponders its next move in Syria, Wald said leaders should make the hard, politically unappealing task of securing chemical weapons the prime objective.

“They (the U.S. and European allies) don’t want to do it and I don’t blame them,” Wald said “This is not easy. It’s much harder than Bosnia or Kosovo.”