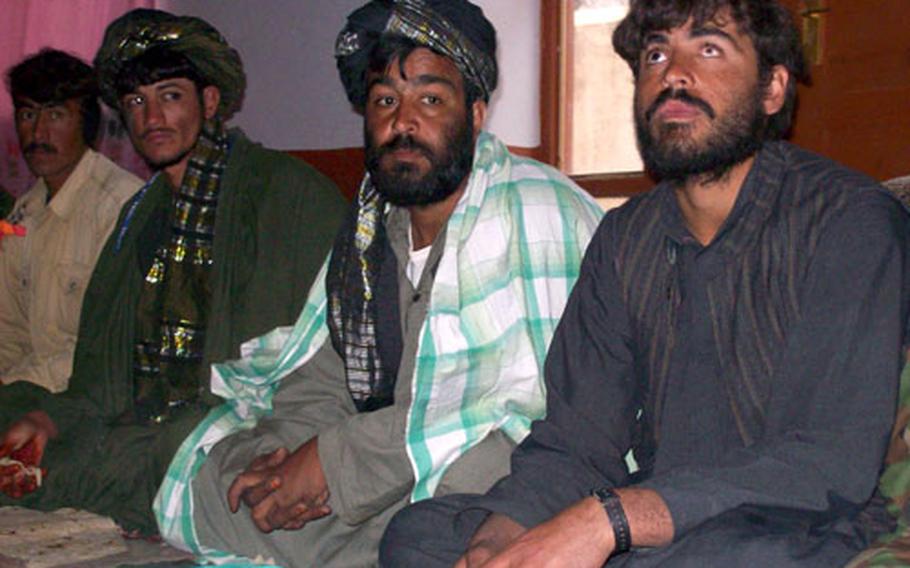 Afghan men dressed in their finest clothes, and some even wore eye-liner, perfume and nail polish, at a lunch with U.S. soldiers to celebrate Eid, a Muslim holiday, in Mizan District, Afghanistan on Thursday. (Seth Robson / S&S) 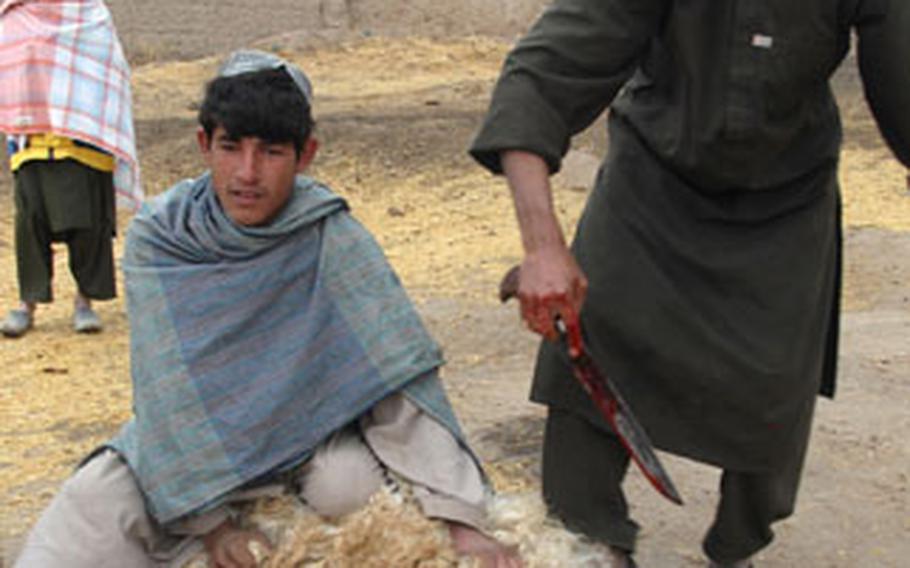 MIZAN DISTRICT, Afghanistan &#8212; In Mizan District this week, U.S. soldiers decorated their base with Christmas ornaments and helped locals celebrate Eid al-Adha &#8212; a Muslim holiday that is like a combination of Halloween, the Fourth of July and Thanksgiving.

Abraham prayed for a son but when he had one, God commanded the new father to sacrifice him. Abraham took his son Isaac to the desert to kill him, but God sent a lamb to sacrifice instead. Abraham had passed the test, Noori said.

In Afghanistan, gunfire at midnight traditionally marks the start of Eid. The 1-4 soldiers got into the spirit by firing mortars to light up a hillside above the Mizan District center.

In one small village in Mizan District, locals gathered by a riverbank to watch an old man slaughter several sheep with a large knife as part of the Eid celebrations. Muslims with enough money should travel to Islam&#8217;s holiest place, Mecca, Saudi Arabia, at Eid and sacrifice a sheep there, Noori said.

In Mizan&#8217;s district center, local security forces personnel and the assistant district chief ate lunch &#8212; meat from a cow sacrificed by the Afghan National Army that morning &#8212; with U.S. soldiers to celebrate the holiday.

The Afghans dressed in their best clothes, which included gold-threaded turbans and, in a younger man&#8217;s case, new jeans and a fashionable yellow shirt. Some men wore perfume and eyeliner and painted their fingernails for the occasion.

&#8220;On the first day of Eid we pray in the morning at the mosque. After Eid prayers everyone hugs. Then the elders of a street will start from the first house and visit each house to say, &#8216;Happy Eid.&#8217; After that we visit relatives and go to parks and the children also go to houses and get cookies and sweets,&#8221; Noori said.

At FOB Mizan the 1-4 soldiers are preparing for a religious holiday of their own &#8212; they&#8217;ve decorated their dining facility/television room with a Christmas tree, tinsel and stockings filled with sweets and cookies from care packages.

One of the soldiers who lives there, Spc. John Yanni, 31, of Rockford, Ill., said that if he were home for Christmas this year, he would visit his parents or, perhaps, go sightseeing in Chicago. Instead, he put the holiday out of his mind and focused on his mission.&#8220;You have family back home who are thinking about you and I think about that from time to time. It&#8217;s just a hard feeling but you just do your job and get on with life,&#8221; he said.

The 1-4 troops will get a Christmas service from a U.S. Air Force chaplain, who is at their base for the holidays along with a chaplain assistant, U.S. Navy Petty Officer Suchon Yi, 28, of Yokosuka, Japan.