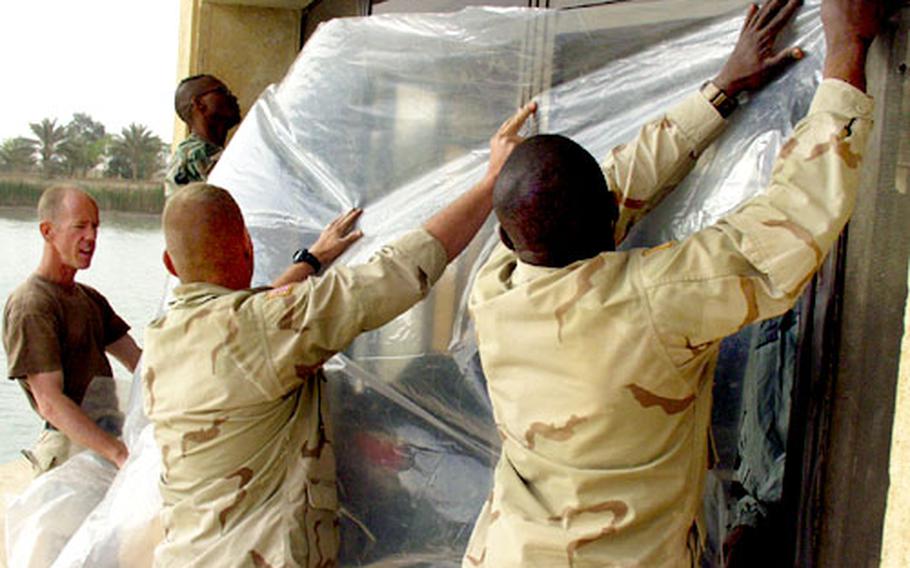 V Corp soldiers put up plastic to keep the wind from blowing into their new sleeping quarters. They were assigned a round house that sits on an island in a manmade lake in Camp Victory, a former palace complex. Looters had broken the windows. (David Josar / S&S)

V Corp soldiers put up plastic to keep the wind from blowing into their new sleeping quarters. They were assigned a round house that sits on an island in a manmade lake in Camp Victory, a former palace complex. Looters had broken the windows. (David Josar / S&S) 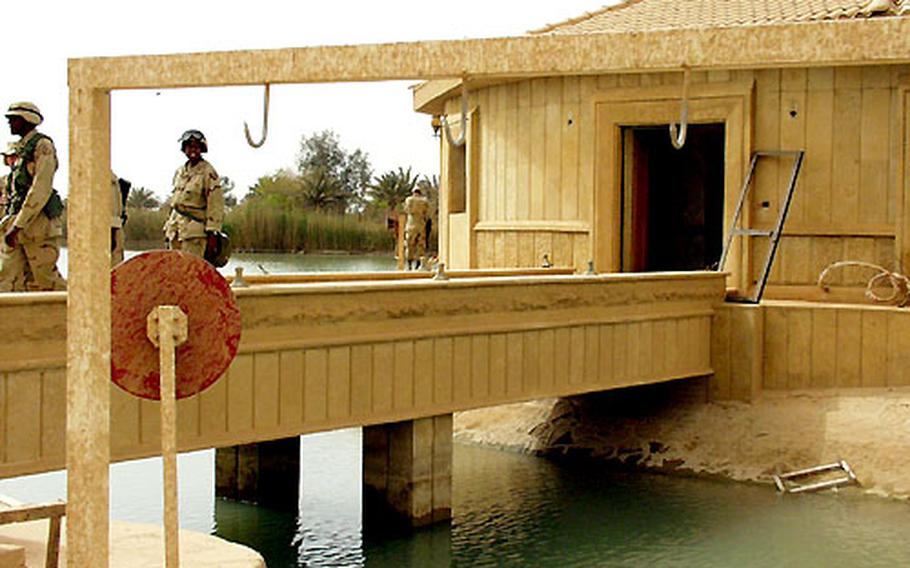 Large hooks to hang the fish stocked in the lakes on the palace compound abound everywhere on the complex. These hooks are near a dock that has been commandeered by troops who will use it as offices and living space. (David Josar / S&S) 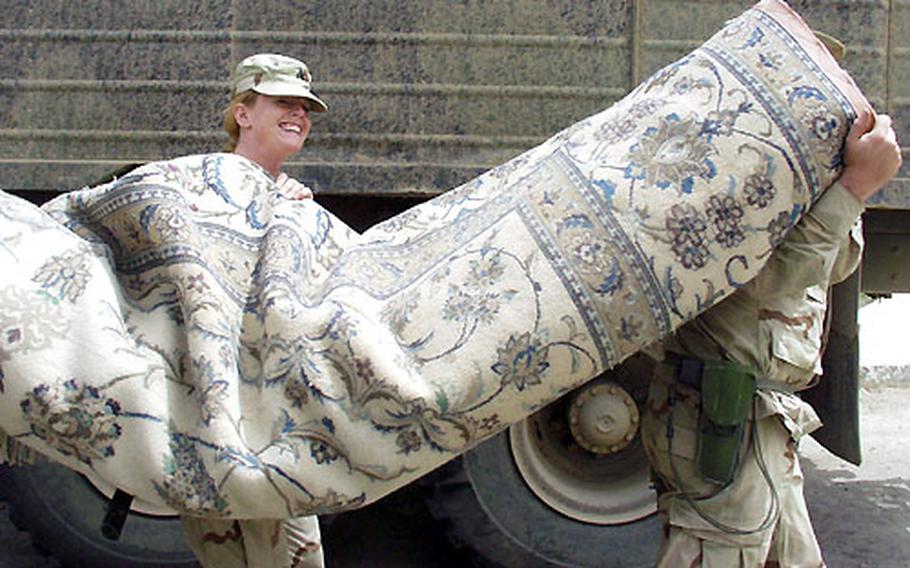 Troops at Victory Camp have been scavenging for items left behind by looters to make their living quarters more comfortable. Here several soldiers haul a rug that they found. (David Josar / S&S) 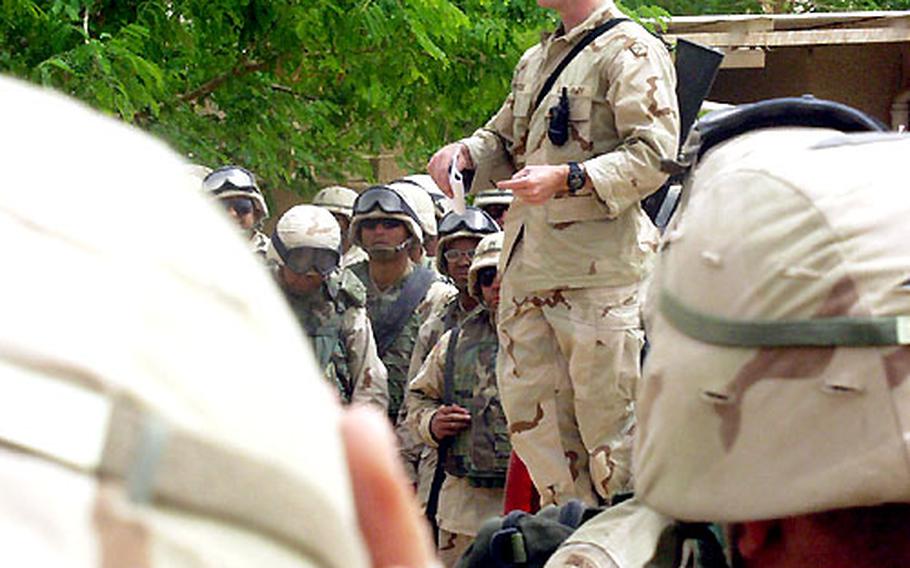 VICTORY CAMP, Iraq &#8212; The nine-square mile compound dotted with man-made lakes and a fully stocked game-fish hatchery must have been paradise not long ago.

But the looters changed that. And the subsequent visit by the first wave of American GIs to reach the place didn&#8217;t help.

Nearly every piece of furniture, light fixture and electrical switch has been stolen or vandalized from Saddam Hussein&#8217;s former palace complex adjacent to the Baghdad International Airport.

Now the home of about 5,000 troops, the complex has become the headquarters for V Corps and Coalition Forces Land Forces Command.

Troops are scrambling to make the awe-inspiring, sprawling compound livable, workable and, as much as they can, comfortable.

They are hunting for furniture for sleeping quarters and offices, searching out discarded plumbing fixtures to create makeshift latrines and scavenging rugs and knick-knacks to make it feel more like home.

On Sunday, he reminded V Corps soldiers from Heidelberg, Germany, who had just arrived, that they are the first group of military personnel who will be coming here to live and use the facility as a base of operations.

He was right. The aftermath of 500-pound bombs is evident everywhere. A bridge near the main palace lies in ruins beneath the water. The power plant that provided electricity to the complex is a crumpled mass of wires, metal and concrete.

The acres of tomato, eggplant and pepper plants are wilting due to lack of water. The elaborate irrigation system has been dismantled and the fruits and vegetables are withering on the vine.

Sporadic, distant gunfire &#8212; V Corps officers say they don&#8217;t know if it is celebratory or from small firefights &#8212; is heard throughout the day and night.

And the water pumps and filtering systems that maintained life in the lakes and canals have been bombed, causing malaria, transmitted by mosquitoes breeding in the now stagnant water, to become a serious risk.

&#8220;The health dangers are high &#8212; very, very high,&#8221; Lt. Col. Hank Dodge, commander of the V Corps Special Troops Battalion, told hundreds of soldiers who are now making Victory Camp their home. &#8220;Do take your malaria pills. Do not drink the water. Swimming in the lakes is forbidden.&#8221;

Dodge explained that the explosions had killed many fish and the carcasses of dead sheep had been spotted in the lakes. The stagnant water mixed with the decomposing animals has become a breeding ground for a variety of potentially deadly bacteria.

The new tenants cruised the grounds &#8212; which include shuttle bus stops for the former residents and workers &#8212; in Humvees and five-ton trucks, scurrying in the hunt to make their living and working quarters as bearable as possible.

Although the complex includes more than 100 other buildings that are in livable condition, some people will eventually need to live in tents, Dodge said.

Most V Corps troops and others at Victory Camp arrived from compounds in Kuwait that had shower facilities, chemical toilets and dining facilities that served several hot meals each day.

The Baghdad facility is lacking by comparison.

The only latrines are in a four-section tent in one area of the complex, and the waste has to be mixed with diesel fuel and burned.

A place to drop dirty laundry for cleaning is not operating. And although there is spotty power for streetlights on the complex, Dodge said engineering crews are working hard to restore full power. The growl of generators is constant.

A squad of soldiers from Company C of the 440th Signal Battalion from Darmstadt, Germany, for example, discovered several porcelain toilets that had not been destroyed by looters. Although there was no running water, they installed their treasure where toilets had been in the building that is their home.

They then bolted on toilet seats and used a bucket of water to fill the tank to make them functional.

The 440th Signal Battalion troops had arrived at Victory Camp a week earlier and snagged an air conditioning unit from a guard tower. But, said Spc. Michael McLaughlin, 21, the chances of finding more such items had abruptly decreased the past few days as more and more troops arrived.

On Sunday, for example, McLaughlin and other members of his company found a building behind the main palace still full of furniture. But when they arrived in their Humvee and trailer to fetch it, they were told by a soldier from another a unit the facility was off limits. It is earmarked for visiting dignitaries.

Elsewhere, soldiers taped plastic over broken windows to block out the wind, and scavenged handmade silk and wool rugs to place under their cots.

Before V Corps soldiers arrived, other troops had to scare off looters who had broken through portions of the wall that surrounds the palace complex. Dodge said locals still climb the wall despite the increased security.

Soldiers have plenty of time to explore on their own. They have discovered a houseboat and several motorboats along boat ramps. Several of the dozens of houses that line the waterways have large hooks to display the day&#8217;s catch of fish.

GIs may be successful in finding discarded or forgotten items to make their cots cozier, but there is one touch of home they shouldn&#8217;t expect soon, according to Branch, the sergeant major.