Troops: Loss will be felt when Air Force cuts chaplain corps by 15 percent 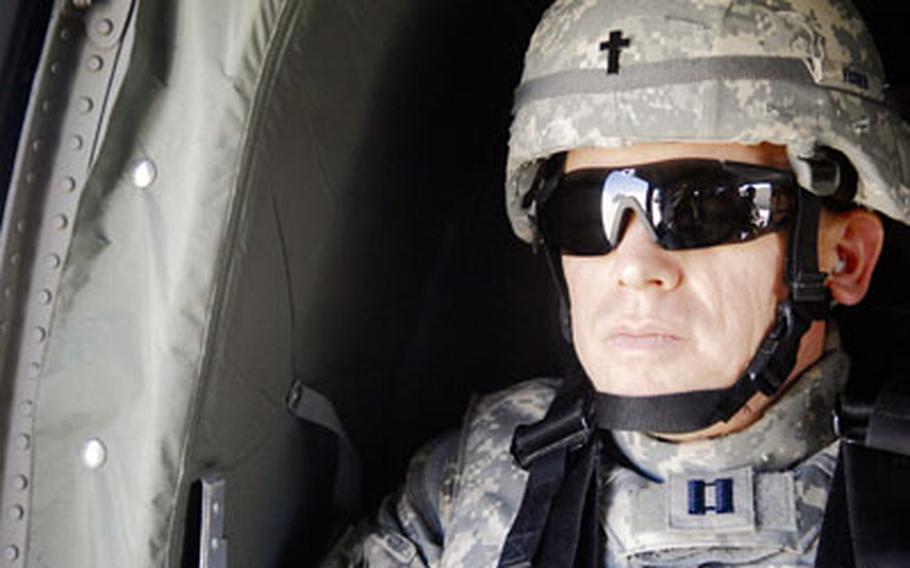 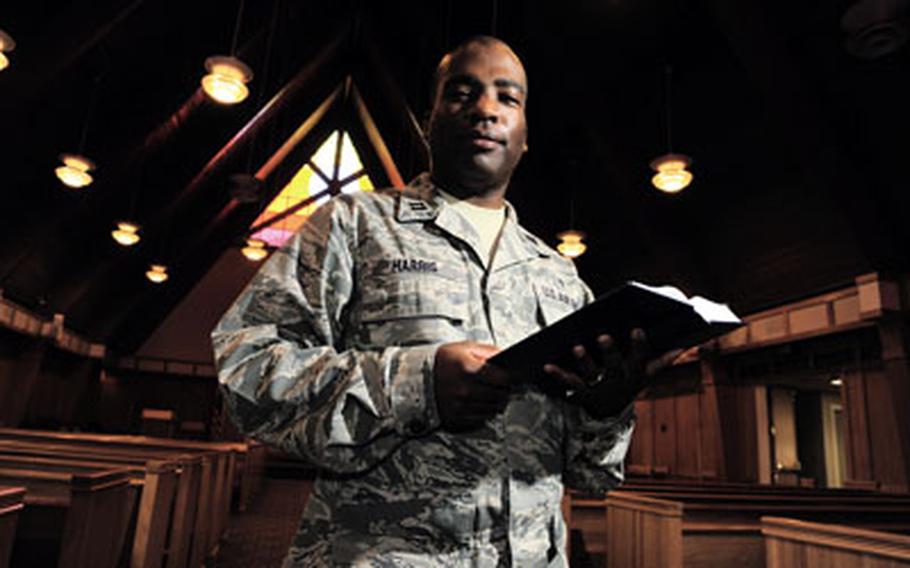 KAISERSLAUTERN, Germany &#8212; The Air Force is reducing its number of chaplains at a time when airmen and family members are seeking their counsel more than ever.

As of this spring, 544 chaplains were on active duty, but as many as 79 positions will be trimmed over the next two years, Air Force officials said.

The reduction of up to 15 percent in the chaplain corps stems from efforts to make certain that the most crucial positions in the Air Force &#8212; such as manned and unmanned aircraft pilots &#8212; are filled, and ensure that no field has more than the mandated number of personnel, officials said

Chaplains "contribute greatly to the Air Force mission and to joint operations," Col. Joan Garbutt, Military Force Management Policy Division chief, said in a written statement to Stars and Stripes. But with high retention, the chaplain corps has grown too big, she said, adding, "We are merely trying to move the chaplain corps toward the right size for the Air Force."

Boards will begin meeting this summer to decide whether to institute any early retirements for chaplains; then whether to consider any involuntary separations.

Some chaplains and outside experts questioned the Air Force&#8217;s decision to cut chaplains, who often can offer troops more immediate and confidential counsel.

Marriage and family issues remain the most-cited reason airmen and family members sought a chaplain&#8217;s counsel, but from 2007 to 2009, combat-stress counseling cases jumped 350 percent, by far the largest increase, according to the Air Force.

The pending cuts in the chaplain corps also come at a time when the service&#8217;s suicide rate is climbing. Through May 7, the Air Force suspects that 22 active-duty airmen have killed themselves this year, according to Air Force officials, more than half the total number of active-duty suicides in 2009. The service has not completed investigations in all the cases.

When Air Force Staff Sgt. Robert Schloendorn was stressed by family and work pressures earlier this year while in Iraq, he sought a chaplain&#8217;s help.

Capt. Steven Fisher, an Air Force chaplain from Elmendorf Air Force Base, Alaska, was a noticeable presence as the 732nd Air Expeditionary Group chaplain at Joint Base Balad, where Schloendorn is deployed for six months.

"He knew the mission. We ate lunch together. I felt more comfortable" going to Fisher than other military counselors who were available, he said.

"I&#8217;m a guy," he said. "It&#8217;s difficult for me to open up ... and talk about my problems and my stresses. He really allowed me to do that without judgment. He helped me out with words of confidence and, really, he just overall made me think about things and made it easier on me."

Especially in a war environment, chaplains are in a unique position to offer spiritual or moral guidance, said Nancy Sherman, a military ethicist and philosophy professor at Georgetown University and author of the recently published "The Untold Story: Inside the Hearts, Minds, and Souls of Our Soldiers."

Chaplains can help servicemembers deal with the "moral injuries" of war, she said.

"It&#8217;s not just about being shell-shocked or smelling the charred skin of your buddy," she said. "But how do you hang on to your moral soul, your humanity," when you see the horrors of war?

The Air Force currently has 724 funded mental health positions. All services must increase those positions by 25 percent, under the National Defense Authorization Act of 2010. In the Air Force, those positions will be filled by psychiatrists, psychologists, social workers and psychiatric nurses, officials said.

But unlike the military&#8217;s other mental health workers, a counseling session with a chaplain is supposed to be completely confidential, even if a person reveals thoughts of wanting to harm himself or another person.

"When you see a chaplain with a problem, it doesn&#8217;t have to be reported," said Layton McCurdy, a psychiatrist and dean emeritus at the Medical University of South Carolina who served on the Department of Defense Task Force on Mental Health in 2007.

"There has to be a place in the military where people can reveal their deepest, darkest secrets, no matter what they are," said Air Force Capt. Christopher Conklin, a chaplain at Ramstein Air Base, Germany.

The task force found that because of that, "men and women were way more likely to have an initial visit with a chaplain," McCurdy said, instead of seeking out other mental health workers.

Scott, 29, commanded explosive ordnance disposal airmen with the 755th Air Expeditionary Group in southern Afghanistan from November 2008 to May 2009. Conklin was their chaplain.

"He gave the guys and me a way to vent in a nonattribution, nonretribution setting," Scott said. Because of the nature of their job, Scott said, his airmen would be less likely to open up to a military mental health professional, fearful that it could affect their career, their security clearance or their reputation for being unflappable.

"We&#8217;re dealing with explosives every day," Scott said. "If someone goes to a shrink, it might raise an eyebrow."

That lines up with the trends chaplains have seen. In 2008, when Col. Harry Mathis, the 86th Airlift Wing chaplain at Ramstein, worked at the Pentagon, Air Force chaplains were averaging about 10,000 counseling sessions per month, "significantly more than the other helping professions that offered counseling services," he said, referring to the Airman and Family Readiness Center, and Mental Health.

In the other services

While the Air Force scales back chaplains, the Army is beefing up its chaplain corps. From fiscal 2002 to fiscal 2012, Army commanders requested and received authorizations for 269 additional chaplain slots, a 10 percent increase. By fiscal 2012, the total chaplain authorizations will reach 2,846, among active, Reserve and Guard personnel. As of April, the Army had 1,640 active-duty chaplains, giving it the best member-to-chaplain ratio among the services, about 350-to-1.

"The Army is recognizing the importance of chaplains and that&#8217;s why we have growth," said Chaplain (Lt. Col.) Carleton Birch, spokesman for Army Chief of Chaplains.

In the Air Force, the ratio is about 785 airmen to one chaplain, when not including chaplains unavailable for person-to-person ministry, such as those serving at headquarters or major commands, for example, according to the chaplain&#8217;s office.

In the Navy, it&#8217;s about one chaplain for every 700 sailors and Marines, according to Navy officials.

The Navy is losing chaplain authorizations, going from 900 to 873 active-duty funded positions by next fiscal year, according to Navy officials. But the Navy&#8217;s chaplain corps is understaffed and, with the service on pace to meet its recruiting goals two years in row, it expects its current number of 828 chaplains to go up, said Chaplain (Capt.) Gregory Caiazzo, a spokesman for the Navy&#8217;s Office of the Chief of Chaplains.

Conklin said in his deployment experiences, including his tour in southern Afghanistan in 2009, more servicemembers seek out faith for the first time or return to faith while deployed.

Scott, the EOD commander, said Conklin often visited with his airmen at their compound in Kandahar. In April 2009, an EOD operator from the unit, Tech. Sgt. Phillip Myers, was killed by a roadside bomb.

"We&#8217;re a small unit of guys," Scott said. "Losing one is huge. He (Conklin) was able to utilize the relationship that he had already built to help them and provide counseling. He was able to just give the guys an outlet for their feelings and let them know it wasn&#8217;t wrong or weird to be upset, to be apprehensive or any of the many reactions that people might have."

Conklin said he and his fellow chaplains at Ramstein also continue to see an increase in counseling requests when not deployed. That can&#8217;t be blamed solely on the war.

Schloendorn, the staff sergeant deployed to Balad, said "it would be a shame" if the Air Force cut back its chaplain corps. "There&#8217;s so many people not just out here in a deployed location but throughout the Air Force and throughout the military that rely on that support to be there in a time of need. They&#8217;re needed everywhere."